This week is anti-bullying week a cause I completely support.  Bullying can take many different forms and is unwanted, aggressive behaviour that involves a real or perceived power imbalance.  Bullying includes actions such as spreading rumours, making threats, attacking someone verbally or physically and exclusion and can involve a persons size, gender, sexuality appearance etc.  Anti-bullying week is run with a view to help people affected by bullying and to try and prevent it – Stop bullying for all.

Back in September my son, Corey, who is 9, opened up to his cub scout leader about how he was being bullied at school.  His cub scout leader then told myself and my husband.  Inside I was shocked that Corey hadn’t opened up to me about it, but upon bringing up the subject with Corey sensitively and supportively I realised that he did not want to worry us as parents so had kept it to himself.  Corey’s bullying was in the form of verbal abuse and slightly physical.  He was very upset but was brave enough to talk about it with us in detail.  As parents we tried to provide the support he needed, asked if he would want us to speak to his teacher (which he did but requested a specific teacher at his school) and of course said he could talk to us at any point no matter how small the problem.  Luckily the bullying seems to have been nipped in the bud hopefully for the long term, but some children and even adults are not that lucky.

As Corey enjoys reading I reached out to some authors on Twitter at the time and asked for some book recommendations that deal with bullying and that maybe could provide some further support to Corey in some way and to help me as a parent be supportive and read a few with Corey to enable us to talk through the issues and I have to say this actually did help.

I would like to share some of these suggestions below that helped Corey.  Thank you to these wonderful authors who were so kind with there suggestions Keris Stainton (@keris) , Robin Stevens ( @redbreastedbird ) , Tom Easton ( @tomeaston ) and Emma Haughton (@emma_Haughton ) . 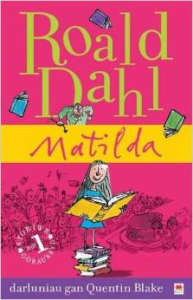 Matilda is a little girl who is far too good to be true. At age five-and-a-half she’s knocking off double-digit multiplication problems and blitz-reading Dickens. Even more remarkably, her classmates love her even though she’s a super-nerd and the teacher’s pet. But everything is not perfect in Matilda’s world. For starters she has two of the most idiotic, self-centred parents who ever lived. Then there’s the large, busty nightmare of a school mistress, Mrs (“The”) Trunchbull, a former hammer- throwing champion who flings children at will and is approximately as sympathetic as a bulldozer. Fortunately for Matilda, she has the inner resources to deal with such annoyances: astonishing intelligence, saintly patience and an innate talent for revenge.

She warms up with some practical jokes aimed at her hapless parents, but the true test comes when she rallies in defence of her teacher, the sweet Miss Honey, against the diabolical Trunchbull. There is never any doubt that Matilda will carry the day. Even so, this wonderful story is far from predictable–the big surprise comes when Matilda discovers a new, mysterious facet of her mental dexterity. 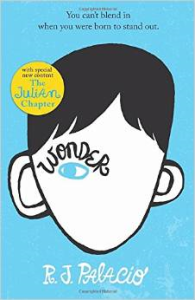 ‘My name is August. I won’t describe what I look like. Whatever you’re thinking, it’s probably worse.’

Auggie wants to be an ordinary ten-year-old. He does ordinary things – eating ice cream, playing on his Xbox. He feels ordinary – inside. But ordinary kids don’t make other ordinary kids run away screaming in playgrounds. Ordinary kids aren’t stared at wherever they go.

Born with a terrible facial abnormality, Auggie has been home-schooled by his parents his whole life. Now, for the first time, he’s being sent to a real school – and he’s dreading it. All he wants is to be accepted – but can he convince his new classmates that he’s just like them, underneath it all? 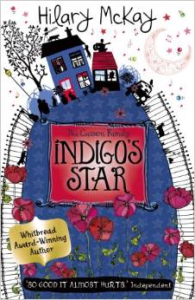 Indigo’s going back to school after a long bout of glandular fever. He’s not looking forward to it, as he knows the bullies will be waiting for him. But he’s determined to stand on his own two feet – so when Saffy and Sarah break up a fight in the boys’ bathroom, he’s furious. Until he meets Tom. Tom is over from the States for a term, staying with his gran while his family sort out their own problems back home. He loves music and joking and is unfazed by the bullies. He helps Indigo to challenge his fears, and in doing so is absorbed into the crazy Casson family and finds some answers of his own. Rose adores him and is determined to help him get the guitar he’s been eyeing in the local music shop – but her attempts to help end in disaster, leaving only one way out: Daddy needs to come back from London to the home (and wife) he’s been neglecting. Rose couldn’t have an ulterior motive, could she? 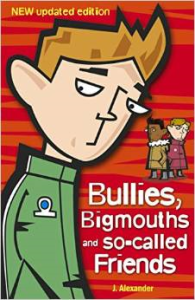 Most books about bullying tell children how to act without addressing how they feel. But the usual advice to ‘ignore it’ or ‘say something smart’ is doomed to fail, as you can’t act brave and confident if you feel stressed and helpless inside.

Jenny Alexander’s approach is to develop readers’ psychological defences. Through an entertaining mix of exercises, quizzes and fictional scenarios, she combines common sense with simple cognitive therapy techniques, to build up children’s self esteem. Her tone is humorous and upbeat, but always sensitive to the reader’s feelings. 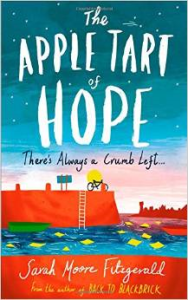 THE APPLE TART OF HOPE BY SARAH MOORE FITZGERALD

Oscar Dunleavy, who used to make the world’s most perfect apple tarts, is missing, presumed dead. No-one seems too surprised, except for Meg, his best friend, and his little brother Stevie. Surrounded by grief and confusion, Meg and Stevie are determined to find out what happened to Oscar, and together they learn about loyalty and friendship and the power of never giving up hope. 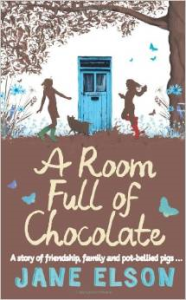 A ROOM FULL OF CHOCOLATE BY JANE ELSON

Grace’s fun-loving Mum has found a lump. Her north London world of sleepovers, tap dancing and playing the clarinet fall apart when she is sent to live with her grumpy old granddad on his farm in Yorkshire while her mother goes into hospital to get better.

Grace misses her mother so much it hurts, and doesn’t quite understand what is happening to her. And things go from bad to worse when she starts school and becomes the bullies’ latest target.

But Grace is no longer alone when she meets Rainbow Girl Megan and her pig, Claude – when she’s with them she feels as if she can confront anything.

At Easter time when Grace misses her mum the most, she knows she must find a way to get to London. With Megan’s help, she hatches a plan to run away that involves Claude, chocolate Easter eggs and a risky ID swap. But it’s all worth it if it means that she finally gets to see her mum …

A gorgeous story of courage and friendship that will tug at your heart strings.

Blubber is a thick layer of fat that lies under the skin and over the muscles of whales . . .

When Linda innocently reads out her class project, everyone finds it funny. Linda can’t help it if she’s fat, but what starts as a joke leads to a sustained and cruel ritual of humiliation. Jill knows she should defend Linda, but at first she’s too scared. When she eventually stands up to the bullies, she becomes their next victim – and what’s worse, Linda is now on their side . . . 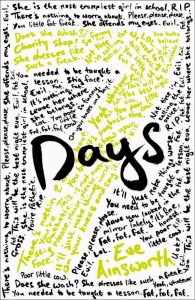 This bold, compelling and topical story about bullying is told from the perspective of the bully and the bullied. You won’t be able put it down until you’ve reached the conclusion. Jess’s life is difficult enough without Kez picking on her – it’s turning school from a safe place into a nightmare. Kez has plenty of problems too but she finds comfort in knowing she is better off than Jess – or so she thinks. A hard-hitting and even-handed look at bullying and the issues facing teenagers today.

Check out my review of 7 Days here

Or my Q&A with a character from the book here

These books are books that Corey and myself found useful and enjoyable in view of dealing with feelings and emotions and are by no means the only books or support out there for anybody that may be suffering at the hands of a bully.  I have posted these in the hope that maybe this may be useful and supportive to others.

For information and support on bullying and anti bullying week please visit some of these website suggestions….please don’t suffer in silence. 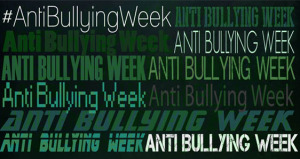