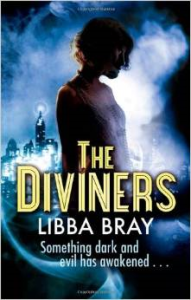 It’s 1920s New York City. It’s flappers and Follies, jazz and gin. It’s after the war but before the depression. And for certain group of bright young things it’s the opportunity to party like never before.

Evie O’Neill has been exiled from her boring old hometown and shipped off to the bustling streets of New York City–and she is pos-i-tute-ly thrilled. New York is the city of speakeasies, shopping, and movie palaces! Soon enough, Evie is running with glamorous Ziegfield girls and rakish pickpockets. The only catch is Evie has to live with her Uncle Will, curator of The Museum of American Folklore, Superstition, and the Occult–also known as “The Museum of the Creepy Crawlies.”

When a rash of occult-based murders comes to light, Evie and her uncle are right in the thick of the investigation. And through it all, Evie has a secret: a mysterious power that could help catch the killer–if he doesn’t catch her first.

This book was suggested to me by the wonderful author Keris Stainton and I kept putting the book off and off and off for quite a while as, if I’m honest, I was quite intimidated by the size of the book.  At a huge almost 600 pages I kept picking the book up every time I was ready to start a new book, reading the blurb and then putting it back down thinking “It’s to big to read now” or “Do I have enough time to read this book”?.  I finally (after Keris prompting me when I posted a tweet on twitter – thanks Keris) thought lets do this!  I’m so glad I did.

I have never read anything by the American author Libba Bray before although I had heard of her and have heard such wonderful things about her previous books including high praise for The Diviners.  From what I have read about Libba she is the queen of historical fiction and in writing The Diviners decided to take on the 1920’s New York Jazz Age with a fantastic supernatural twist which, for me, chilled me to the bone! As well as being intrigued by the whole historical side of the book, especially with it being set in the 1920’s which I did not know much about,  I love a creepy read and as I also heard that this book (s) had a US advance of $1 million I was expecting great, scary things.  Just how scary and creepy I really was not prepared for!

The opening to this book, A Late Summers Evening, sets the 1920’s scene at a party with a group of friends who decide to play with a Ouija Board (nothing good EVER comes from playing with a Ouija Board) and unknowingly they awake something dark and evil.  This opening few pages, for me, where chilling and the beautifully crafted descriptions made my heart beat just that little bit faster!  You can listen to the opening few pages told in 1920’s style here.

The story centres around a seventeen year old girl called Evie who, after being shamefully banished by her parents  for embarrassing the family name, goes to stay with her uncle Will in New York who seems to have a slightly unhealthy obsession with the occult.  Evie is over the moon as New York is THE place to be and is where her best friend Mabel lives and Evie intends to tear up the town.  That is until the police find a murdered girl who has been marked with a cryptic symbol.  Will is called to the scene and this is where Evie realises that she could help catch the killer as Evie has a secret which may prove helpful.

The book is broken up into named chapters and do not always focus on seventeen year old Evie.  There is Sam the cheeky chappy pick pocket, Jericho the serious mysterious student, Mabel the shy best friend, Theta the beautiful talented flapper girl, Memphis the illegal number runner and of course a few dead bodies and a truly terrifying villain!  All of these characters become intriguing throughout the book as stories unfold in a complex, twisting plot with a LOT of creepy and sometimes stomach churning moments (If you have read the book I will say the words cat and rabbit heart and hopefully you will know what I mean).  Libba Bray really gives us an all round ensemble of characters and even throws in a bit of a love triangle amongst all of the creepy moments.

I have to admit I really struggled with the first quarter of this book (I would say around 80 pages).  I found Evie such a selfish and beyond annoying character and I found myself getting frustrated.  I found the detail and the narrative of the book a little over whelming and  I struggled to get to grips with the what seemed like annoying one liners and slang I couldn’t get my head around.  As usual I turned to twitter!

Through posting on twitter I found a lot of people found the same with some people giving up on the book, but a lot of people telling me to stick it out you will love it.  I rarely give up on a book.  I put the book down for a few days and without really thinking about it started looking up clips and music from the 1920’s to try and get my head around the language and the historical period as I thought maybe my lack of knowledge of this era was causing me to not like the book (if that makes any sense).  I stumbled across a dedicated page set up for The Diviners  – www.thedivinersseries.com .  On here were clips of the book (as above) told in 1920’s style narrative, 1920’s music, character profiles for the book etc.  It gave me a real sense of the era and for me as a reader struggling with a book it really helped.  I picked the book up again and really got into it finding that I was reading the speech differently and actually realising that Evie was actually quite a bright and breezy character.  I had a break through!  But I almost put the book down again when Keris sent me this link for The Diviners Book Trailer ….If you scare easily do not click on the link!  Well I didn’t put the book down (yay) and I loved it.

For me the stand out character in the book was Memphis…I loved his character to pieces.  He looks out for his little brother Issiah and try’s his best to look after him.  His whole presence in his scenes stole my heart and for me was the most relatable character.  That being said, as mentioned above, all the characters were intriguing and Libba Bray offers us such detailed back grounds of the characters you really get to know them.  The whole supernatural theme runs throughout the book with the perfect balance of good versus evil and an amazing climax at the end.

I found out before finishing the book that The Diviners is a four book series with the second book, Lair Of Dreams, due to be released on the 14th April 2014 in the U.K and the last 40 pages of the first book really set the scene for the next book and left a few burning questions in my mind.  I really cannot wait for the second book and it is one that I am definitely excited to read next year.

If you like historical fiction, supernatural ghost stories, haunted houses, creepy things, murder and a bit of love this book is for you.  I noticed a question on Libba Bray’s website which made me chuckle.  When asked what we, as the reader, can expect from The Diviners Libba simply answers NIGHTMARES!

Has anyone read this book?  What did you think?  If you haven’t read the book do you think you will?  I would love to hear from you – either click the reply button at the top of the page or why not tweet me on twitter ( @chelleytoy ) ?