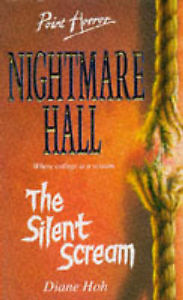 There’s a reason why they call it Nightmare Hall . . .

Jessica Vogt gets a rude awakening when she moves into Nightingale Hall and learns that the previous spring, a student named Giselle hanged herself from a light fixture—in Jess’s new room. Campus officials pronounced it a suicide. But did Giselle really kill herself? Or was it a setup?

Strange things are happening to Jess. One night, she is awakened by a terrifying scream. A photo taken of Jess and a classmate reveals a third person in the shot—a girl with long, pale hair and a sad face. Is Giselle trying to communicate with Jess? As Jess moves closer to what really happened that fateful night, someone starts targeting her. Is she being haunted by a ghost, or is there a killer on the loose?

The story for book one of Nightmare Hall is basically a whodunit story based in a fictional university called Salem University.  A group of students, Jess, Ian, Jon, Cath, Linda and Milo who are starting at the university cannot afford to stay on campus so decide to take up digs at Nightingale Hall with old Mrs Coates to be their house mother and Trucker the handy man, but they soon find out that people have nicknamed the house on the hillside Nightmare Hall due to recent events that have taken place there.

The scene and atmosphere of the hall are set up nicely in the prologue at the beginning of the book which gives a chilling back story about a young girl called Giselle McKendrick who committed suicide in her bedroom at Nightingale Hall the bedroom that in present day Jess occupies.  For a point horror book I found this prologue quite disturbingly terrifying.  Even though the prologue is short it has the dramatic chilling impact it needs to set the story off nicely.

The story is told from Jess’s point of view.  Jess is definitely a better example of a point horror character than some point horror characters I have re-read recently.  She is smart, witty and loves pizza (who doesn’t?)! The other students are all different.  You have Jon, the ladies man, Linda, the athlete, Ian, the nice guy, Milo, the geek, Trucker, the handy handy man and Cath who is just Cath but does provide some laughs. When the house mother of Nightingale Hall has a somewhat sporadic accident the new students at Nightingale Hall are determined to be grown up and look after themselves and have a good time whilst doing it.  But thanks to some strange goings on, including a ghostly photograph, things going missing, noises in the night, getting locked in the cellar and a strange worm encounter that would put I’m A Celebrity Get Me out of Here!  to shame there is defiantly something awry in Nightingale Hall.  Jess soon starts to think that maybe Giselle’s death was not a suicide…maybe someone was responsible for her death and is now trying to cover their tracks and kill her in the process!

I have to admit I don’t really remember this book from the first time around in the 90’s.  I obviously had it and read it as it was in my collection upon digging the books out of the shed, but I remembered nothing whatsoever about it.  As far as point horrors go I thought this was pretty good.  I found the reveal in the end a bit guessable, but enjoyed the whole whodunit premise and loved all the spooky, terrifying stumbling blocks Jess and her friends had to contend with and overcome.

There were some rather dated dialogue and some great 90’s references in the book.  For example, Jon dreams of Kim Basinger and orange laces that everyone seemed to have on their trainers (I’m sure these are back in fashion actually?!). So this gave the book quite a retro feel and did make me laugh on a more than a few occasions adding some comedic value to what, as a young reader years ago would never have picked up on.  There were also some big shocking fashion no no’s.  At one point Cath choses to where a pale blue cloud dress (!?) to the Fall Ball….the imagination runs wild with that one and Juno Dawson has put a lovely picture he found of a pale blue cloud dress on her point horror book club page for this book (check it out –  its great but beware of spoilers!)!  I loved the fact that the dating scenes read like a sketch from Made In Chelsea….all dating each other and swapping around who they fancied which again was great fun to read.

All in all I enjoyed the re-read of this book many years after the first time around.  It really is a great addition to the Point Horror Series and one of the top ranking in the re-reads so far.

It would be great to hear if any one else remembers this book or the Point Horror Series in general or if anyone is going to give it a read following this post?  I would love to know what you think so please feel free to leave a comment below using the reply button at the top of the post or send me a message on twitter ( @chelleytoy ).

So why not join in the discussion on the 13th of every month?

There will also be a poll for around 3 days after the post is up to vote for your next #pointhorrorbookclub read!

It would be great to hear if any one else remembers this book or the Point Horror Series in general or if anyone is going to give it a read following this post?  I would love to know what you think so please feel free to leave a comment below using the reply button at the top of the post or send me a message on twitter ( @chelleytoy ).