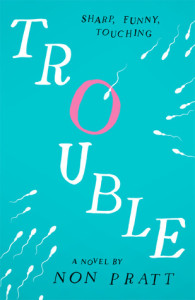 Following recently reading Trouble which was released earlier this year (shame on me for leaving it so long before I read!) and with Trouble being nominated for a Carnegie award and many other awards I have had the absolute honour of putting some questions to the lovely author Non Pratt.

I recently met Non at a book event at Birmingham Waterstones and she is absolutely lovely and gives lots of nice hugs!

Check out my review of Trouble here! 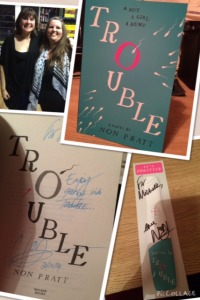 About Non Pratt – taken from the back of Trouble

Non Pratt’s real name is Leonie, but please don’t call her that unless she’s done something really bad.  She grew up in Teesside and now lives in London.  She wrote her first book aged fourteen (This is not that book).  After graduation from Cambridge University, Non decided to work in children’s publishing.  Unfortunately, she went to her first job interview with her top on inside out.  Fortunately, they hired her anyway.  Since then she has worked as a non-fiction editor at Usbourne and fiction publisher at Catnip.  She now writes full-time, and Trouble is her debut novel.

Hi Non.  Welcome to Tales Of Yesterday.  Thank you so much for featuring on my blog…I am very excited and thrilled to have you here and is very much an early Christmas present for me! 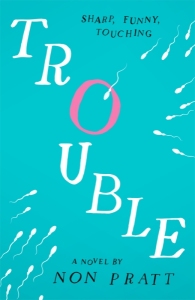 Trouble is published by Walker Books and is the story of Hannah, the smart and funny fifteen year old girl who finds out she’s pregnant and Aaron (I loved Aaron), the new boy in school who wants to keep low key, but offers to be the pretend Dad of Hannah’s unborn baby.  The story is told in alternating perspectives between Hannah and Aaron and as the story unfolds becomes so much more than you think from reading the synopsis as the two teenagers help each other move forward, make choices, and deal with loss, regret and hope and how important real friendship is.

You can find my full review of Trouble here

I really enjoyed reading Trouble and congrats on the Carnegie nomination and all of the other fab awards this book has been nominated for.  So many people kept telling me Trouble was the must read of 2014 and I have to agree!

What inspired you to write the story of Hannah and Aaron?

I always wanted to write a story where teen sex played an important part and when a culmination of headlines and TV programmes prompted me to notice how judgemental society is about pregnant teens, the idea for Hannah’s story snowballed from there. As I would never have picked up a story that focused solely on pregnancy when I was a teenager, I knew I wanted something else driving the story, and there arose Aaron and his involvement in Hannah’s story. (Not his plot, though, I didn’t really know what that was going to be until I got started.)

How important are names to you in your books?  Did you choose the names Hannah and Aaron on liking the way they sounded or do they have some special meaning?

I thought it was important for the main girl in Trouble to have a very familiar name and I think most people know a Hannah… and a Hannah I know also happens to have the surname Sheppard – I liked her name so much I thieved it. Once upon a time Aaron was called Damon, but after a couple of chapters I knew it was wrong and modified it to Aaron. I have no idea why.

Do you see yourself in any of the characters in Trouble or have you used any of your own experiences in the story?

Yes and no. There is a lot of me in both Hannah and Aaron. Hannah’s need to love and be loved is something I identify with, but I always felt more of an outsider as a teen – much like Aaron. Having said that, there’s a clear distinction between who I am and the characters I created. Their experiences are a hybrid of memory and imagination so that nothing is that close to reality.

Characters often find themselves in situations they aren’t sure they can get themselves out of.  When was the last time you found yourself in a situation that was hard to get out of and what did you do?

I fell out with a good friend once and it took me a very long time to accept that there was nothing in this world that would undo what had happened. Sometimes there are situations from which you can never escape and your only choice is to live with it.

The big question is what “Trouble” did you get into when you were Hannah’s age?

Not much! My mum was extremely liberal in the way she treated me, which meant that I learned quickly and with little fuss what I wanted to experiment with and what I didn’t. There was very little moralising about it. Most of the trouble I did get into was at school for drawing on desks, scruffy uniform and cheeking teachers, which is all rather dull by comparison.

I know this question was asked during the event in Birmingham, but if you could cast your characters in a big Hollywood film adaptation who would you choose?

Hmm, I always find this an interesting question because I love books and I’m intensely invested in those that I loved growing up, such as The Deptford Mice by Robin Jarvis and the whole of Dick Francis’s back catalogue. Later on, Laurie Halse Anderson’s Speak really showed me what YA books could do, but I don’t know whether they inspire me to write, so much as inspire me to think. Music is usually what makes me want to sit down and write.

That intangible thing called ‘voice’ and a complete lack of fear. Any story can be great in the hands of the right storyteller.

Being quite the contented soul, I rarely spend time wanting the impossible (like creating books I know I couldn’t have written!), but as I reader I loved This Song Will Save Your Life by Leila Sales and I really admire the way Rainbow Rowell writes falling in love with someone – every book is slightly different and deeply believable.

I don’t really know that I understand how a collaboration works… can I just cheat and pick authors I have already worked with in slightly different capacities? A.J. Grainger whose debut novel Captive is out in January is one of my editors and when I worked at Catnip Books I worked closely with fellow editor  Liz Bankes who wrote Irresistible, Undeniable and Unstoppable.  Both ladies are complete and utter geniuses and a delight to work with.

I start by jotting down character traits and then dive in and write whatever scenes take my fancy before going back to the start of the book and stitching the whole thing together with narrative. It is a woefully inefficient way to write.

All writing habits are strange. I suppose the fact that I will only drink out of my ‘Writer Girl’ mug when writing might qualify as odd…

I love first drafts where nothing really makes sense and I’m in lust with a new idea that I can’t spend enough time with. I am less keen on all the hard work involved in the redrafts, but I like the results they produce. Also, I HATE TITLES.

What happened to the book you wrote at the age of fourteen?

I finished it at an Arvon Foundation retreat when I was nineteen and cried at the ending. The people on the course were wonderful and toasted the achievement – back then I didn’t know that finishing novels could be hard! I rewrote it a couple of years later, but it still sucked.

Your next book Remix (love that title) is out June 2015 (exciting!) – could you tell us readers what to expect from your second novel?

It’s about two best friends, Kaz and Ruby, who go to a music festival to get over their ex boyfriends and away from their problems back home. It doesn’t work. What ensues is a weekend of increasingly bad decision making. It’s about friendship. And condoms. And the double-edged sword of getting what you ask for.

I heard on twitter that the name Remix came after a very painful title process – was it that bad?  Why do you think coming up with the title for a book is so hard?

Naming a child is easier than naming a book. Titles have to please everyone from your editors to the sales team and when you’re stupid enough to sit down and try to write a book without a title, you deserve all the heartbreak and misery that’s coming your way. (Yes, I am talking to my past self – and my future one.) I think it’s hard for me because I’m no good at them, they just don’t spring to mind. Taglines I love – titles, not so much. So my answer is a wholehearted YES! it was that bad.

Recently I asked some lovely UKYA authors their thoughts about does music influence their books or their characters.  Did music have any influence in your upcoming book Remix?

I think it’s a poignant look at the pain of a failed relationship – it isn’t anguished, or bitter, just incredibly regretful and sad. There’s a line “And it’s been awhile/ but I can still remember just the way you taste” and it’s always hit me hard. The thought of the intensely private sense-memory that only you can know and that you’ll never have again hits me every time I hear this song. I’ve been thinking about that line since I first heard the song in 2001 and had an influence in Remix before and during the book.

This song is probably one of the reasons I’ve always wanted to write a book about relationships past and that’s a very important part of Remix. The thing is… I think you can look at this song from any point of view you want. There are two main characters in Remix: Kaz and Ruby and I’ve always seen this song through Kaz’s eyes, since she’s the one who yearns for her ex boyfriend… But more recently I’ve been listening to it from Ruby’s point of view, or even that either of their ex boyfriends… Regret isn’t something only injured parties feel in a break-up scenario.

Are there any exciting plans following the release of Remix next year?  Another book in 2016 maybe (cheeky question)?

We’ll see. I was only contracted for two books, but I’ve plenty of ideas…

Thank you so much for taking the time to answer these Non and I can’t wait for Remix next year!

You can buy Trouble here