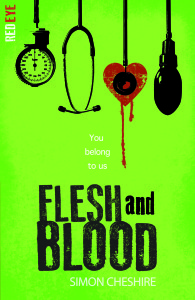 I must record the facts that have led me to where I am now. So that, when someone reads this, they understand. Sam Hunter’s neighbours are pillars of the community, the most influential people in town. But they’re liars too. The Greenhills are hiding something and Sam’s determined to find out what it is. As his investigation unfolds, he realizes the lies reach further than he ever imagined – is there anyone he can trust? Uncovering the horror is one thing …escaping is another.

I recently read and loved Flesh & Blood by Simon Cheshire   (see my review here) and I am honoured to feature a guest post by Simon as part of the blog tour to celebrate the release of this third book in the fab Red Eye series from Stripes Publishing.

So it’s Friday the 13th ….what could be better than Simon talking about the book his top 5 scares!!!

*Presses play on Friday the 13th soundtrack…..hands microphone to Simon……quakes in boots and hides under the covers….maybe do a little whimper!*

Over the years, I’ve collected a kind of mental baggage of horror yarns – films, books, comics etc – which have stayed with me.

These are some of my favourites (in no particular order):

Everything you could want in a creepy story is distilled into these two movies, both directed by James Whale with a kind of gleefully ghoulish humour. Sure, they look a bit creaky and primitive today, but there are more memorable moments and images in them than in any other horror films I’ve ever seen.

Poe’s stories – and his life! – were so soaked in melancholy than you can’t read his work without being chilled by a haunting sense of doom. My all-time favourite is The Black Cat, which culminates in a murder that is summed up in possibly the single most haunting sentence in all gothic literature. 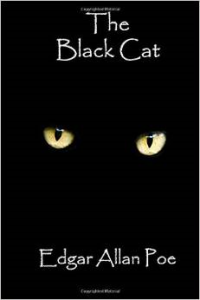 THE SHORT STORIES OF H.P.LOVECRAFT

The more you read of these, the more you can feel a looming, unseen presence slowly slithering up behind you. They’re often about unstoppable nightmares from the ancient past. The novella At The Mountains Of Madness is a good example, although my personal favourites are Herbert West, Reanimator and The Rats In The Walls. 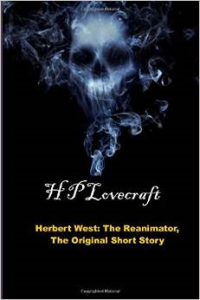 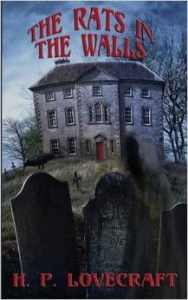 INVASION OF THE BODY SNATCHERS (1978)

This is the Philip Kaufman remake. The original Don Siegal version was brilliant, but the remake is utterly terrifying, all about urban paranoia. That ending… O!M!G!

Not the Jeff Goldblum one from the ‘80s (which was awful) but the one starring Vincent Price. I defy anyone to watch this movie and remain un-creeped-out. Another horrifying ending, too, one that will live in your nightmares forever. “Help meeee! Help meeeee!” Eeuuurgh!! 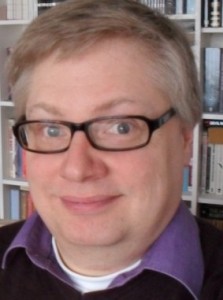 I would like to say a huge thank you to Simon for a fab guest post and Stripes publishing for sending me the book and having me on the blog tour!  Its been a very scary journey *looks over shoulder and shudders*!

Have you read this book or any of the other Red Eye series?  Do you like a scary read?  What are your top five scares?  I would love to hear from you!  Why not leave a comment using the reply button at the top of this post or tweet me on twitter using @chelleytoy

Happy reading and hiding under the covers!