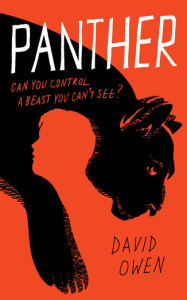 The 7th May 2015 marked the release day of Panther by debut author David Owen published by Little Brown UK. I am very excited to have been sent a copy of this book which was arranged by David himself and the publishers.  I feel so honoured that I received this book as I loved it!

I featured David on my blog previously for #Countdownya where David answered some questions so honestly and openly that I was left amazed and proud of David and the answers he gave!  You can catch this post here

I am over the moon to have been asked by the Grace at the publishers to be part of the wonderful blog tour for this book and for my stop on the tour I will be reviewing the brilliant Panther and I also have an awesome international giveaway!

I am also happy to be part of the tour today as it is Mental Health Awareness week…something I am hugely passionate about supporting!  You can find out more here where you can find advise and support for anyone who needs it whether you are suffering or know some one who is.

Thank you to both Grace at Little Brown UK and David Owen for having me on this wonderful tour.

Don’t forget about the giveaway at the bottom of the post!

Life isn’t going terribly well for Derrick; he’s become severely overweight, his only friend has turned on him, he’s hopelessly in love with a girl way out of his league, and it’s all because of his sister. Her depression, and its grip on his family, is tearing his life apart. When rumours start to circulate that a panther is roaming wild in his south London suburb, Derrick resolves to turn capture it. Surely if he can find a way to tame this beast, he’ll be able to stop everything at home from spiraling towards disaster?

Category – UK YA, YA

I was sent a copy of this book by the wonderful publishers Little Brown UK / Corsair and the author David Owen.  This does not affect my review or my opinions in any way and am delighted to write an honest review.  Thank you Corsair and David for sending this to me to read!

Panther is a raw, powerful read that tackles serious subjects mainly about depression and how depression is still widely misunderstood, the damage that it does, the effect it has on the sufferer and the people around them and the stigmas of depression.  In some ways a hard read, but in a good way. You feel the struggles of Derrick and his family and as a reader you feel so many emotions! It is truthful and honest and does not gloss over any aspect of depression and that’s what makes this book so very special and important.

In Panther we get to meet Derrick who’s life seems to be going downhill since his Mom and Dad have split up, his sister was diagnosed with depression and has tried to kill herself.  Derrick has become overweight and humiliated at school by the school bullies where an unfortunate incident was filmed and posted on the internet, his best friend has stopped talking to him and his school crush, Hadley, does not seem to notice him.  He hears rumours of a Panther roaming the area and sets his sights on catching the Panther!  Derrick believes if he can catch the beast the downward spiral of himself and his family will cease!

The main character Derrick, for me was both relatable and caring all with a pinch of humour in his character which for me was perfect.  It’s a hard, to the point, raw book so to have some humour provided some light moments and made Derrick a character that you cared for and understand why he is doing what he is doing and invests so much in finding the Panther!  It made me laugh when Derrick is studying his naked reflection since putting on weight which is awful for him, but confesses that the school bullies are yet to decide on a proper name  for a fat boys breasts…..David Owen offers us the knew word of Chesticles!  Whilst this is humorous Derricks insecurities about his weight or about how he says things to his school crush Hadley are realistic and you feel every word and feeling he must be experiencing.

One thing I loved about the book was the way the relationship between Derrick and his sister Charlotte blossoms.  Derrick is intrigued by his sister Charlotte and her depression and wants to help, but in the beginning Derrick also holds some resentments towards her for what he classes as ruining their family and he struggles to understand her depression in the beginning.  It is the same visa versa, Derrick is the one who found and saved Charlotte when she tried to kill herself which happened before the book starts, but Charlotte learns to be thankful for this act of unconditional love for his sister although to begin with she cannot see this.  The relationship grows and it is touching to read.

Panther also shows the strain depression has on family and friends as well as the sufferer.  Derrick’s Mom was realistically portrayed in the fact that she cares about her children, her family and provides support and encouragement, but her worries and concerns for her daughter are portrayed exactly how I would feel if this was my child and you would do anything to protect them.  I felt her emotion and pain as much as I felt Derrick’s and Charlotte’s.

As the pages turned I found myself emotionally invested in the book, the characters and as the book progressed and aspects of Derrick and his families lives begin to unravel and reveal themselves to me as a reader I too held hope and wanted Derrick to catch his Panther in the hope that it would help!  With the allotments being the only place Derrick feels free and with the beast on the loose, roaming free I wanted to jump into the page and help Derrick catch that Panther myself!  I’m not gonna lie….this book made me shed emotional tears by the end, but this is down to it’s honesty and rawness of the story that has been written.

This book is a debut by David Owen and it is a credit to him completely!  I am in awe of his honesty, sensitivity and the powerful way his words hit home no matter how painful that may be!  In my opinion and from own personal experience this book is a honest interpretation of depression, its effects and it’s stigmas and I honestly believe and hope this book can help people feel less alone or help them through anything they may be going through.

I am excited to see what’s next from an amazing new author!  Really well done Mr Owen…..in my opinion you are a brave, honest and most of all amazing person!  Thank you for writing this book!  Panther is and will be one of my top ten books of 2015 and has left its mark on me long after finishing it!

You can buy this book here or why not order it in at your local bookshop! 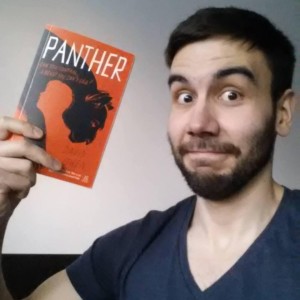 David Owen achieved a first class honours in BA Creative Writing and an MA Writing for Children at the University of Winchester, where he went on to teach on the BA Creative Writing course for three years. He is also an awards-shortlisted games journalist, with a particular interest in the applications for video games outside of entertainment, and he has written about games being used to treat depression, dyslexia and autism. David has been published as a poet in journals including Agenda and Seam. Panther is his first novel.

You could win a copy of the brilliant Panther by David Owen!

Yep!  One winner will be picked and the competition is open internationally!

Giveaway ends on the 23rd May 2015 and the winner will be announced on twitter!  And updated here 🙂

Please note that there is only 1 copy of the book up for grabs with 1 winner being announced.

Why not catch up or follow the rest of the Panther blog tour ! 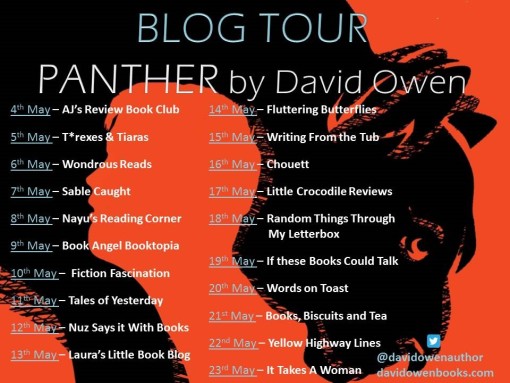 Have you read Panther?  What did you think?  Has this review persuaded you to pick up a copy and read?  I would love to hear from you!  Why not leave a comment using the reply button at the top of the page or tweet me on twitter using @chelleytoy !