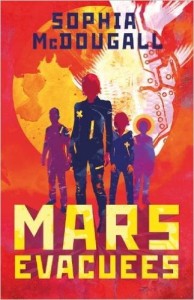 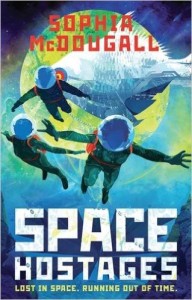 The 2nd July 2015 marked the release date of Space Hostages by Sophia McDougall which is the follow up to the 2014 book Mars Evacuees.

It’s always lovely to receive an email from the lovely Maggie at Egmont so excitedly I clicked on an email she had sent me asking me if me and my son Corey would be interested in two sci-fi YA books….. this is how she described them to me (I had to include this as the descriptions were just brilliant!)…..

Mars Evacuees follows the story of Alice Dare, who is evacuated (bet you saw that coming!) from her boarding school to Mars because the war against the aliens who have invaded Earth, is, in Alice’s words, ‘not going fantastically well.’  She’s sent to Mars as part of a training programme with other children and all sorts of interstellar mishaps ensue.  (The most important thing to remember when you’re sent to junior military training programme on another planet is Always. Carry. Duct. Tape.)

Space Hostages picks up Alice’s and her friend’s story about a year later, and the first sentence is a real winner: You can’t cry in space.  I won’t say anything else for fear of spoiling everything that happens in Mars Evacuees.

I WAS COMPLETELY SOLD!

I jumped at the chance and was lucky enough to receive both books! From Maggie’s description and as always fab blogger Jim Dean telling me they are amazing I could not possibly say no.

Currently these are sitting high on my TBR pile and I will be reading them very shortly, but in the mean time I am so honoured to feature a fab guest post from Sophia about how she created an alien species!  It’s completely fascinating and I’m so happy and over the moon to be able to share this post!

I also have a special treat too….Sophia reads an extract from Mars Evacuees at the bottom of the post!  Don’t miss out on watching this as it’s a real treat and gives a brilliant taster of what we should expect in the book!

First though a little about the books……

The fact that someone had decided I’d be safer on Mars, where you could still only SORT OF breathe the air and SORT OF not get sunburned to death, was a sign that the war with the aliens was not going fantastically well.

When Alice Dare finds out that she’s being evacuated to Mars to join the youth defence force, she isn’t sure what to expect. But it sure wasn’t being shot at, chased by invisible aliens, befriending a robot goldfish – and then having to save the galaxy!

The second book in this interstellar adventure series, perfect for fans of Percy Jackson and Artemis Fowl.

You can’t cry in space. But I was giving it a good go.

After all, I’d just been THROWN OUT OF AN AIRLOCK by a horde of ALIENS and had about three minutes left to live. So you can’t blame me for trying.

But as it turned out, that was just the start of my adventures . . .

Because very soon it became clear that if I was ever going to get back home, not only would I have to NOT DIE, but me, my friends and our floating robot goldfish would have to SAVE THE WORLD. No, scrap that. THREE WORLDS. All at the same time.

One of the best things about creating alien species is that it’s a really intriguing way to explore human characteristics – alien creatures can serve as a foil for human characters and also introduce obstacles to the plot.  They can also be a great way to highlight there’s much more that we have in common, than not.

Here author Sophia McDougall tells us what inspired her to create two alien species – the Morrors from Mars Evacuees and the Krakkiluks from the sequel, Space Hostages.

*Hands over to the wonderful Sophia….gives Sophia duct tape as instructed!*

I don’t think anyone’s summed up the reasons for wanting to explore space better than Star Trek.  You do it “to seek out new life and new civilisations.”

Partly, it’s about the wonder of the universe and wanting more of it. It’s about wanting to learn from unimaginable cultures, about finding new ways to look at our own species and our own world.

But it’s also only exciting if you’re at least a little worried some of that new life might want to eat you.

So for now I’m going to stick to the Morrors, from Mars Evacuees, and the Krakkiluks, from Space Hostages.

“Obviously I was scared of the Morrors, because you can’t see them and they can kill you…”

One challenge when writing the Morrors was to make them seem like a credible product of evolution, without being much like any creature we see on Earth.

But one of the first questions had to be “What’s scary?”

To me, the simplest, best answer had to be: “something invisible.”  If you can’t see something, it could be up to anything, and it could be a million miles away…

…or it could be right next to you.

These aliens would be like ghosts. Invisible. Cold.  Their voices, too, would sound spooky, like long sighs or moans. And they were freezing the whole world over.

But it was important to me that I never introduce a race of aliens who were simply evil, who wanted to destroy or enslave the Earth just for fun. This meant that however bad the Morrors’ actions were – and they’re pretty bad– they would have to have their reasons. They would have to be made up of complex, individual people.

All this meant they couldn’t stay invisible. Part of the story would have to be about the children learning to see them, both literally and figuratively, for who they were.

So if my aliens would be flying in invisible ships and wearing invisibility gowns, what was underneath?

Aliens have been green, red, blue, yellow, purple and grey — not much is left. 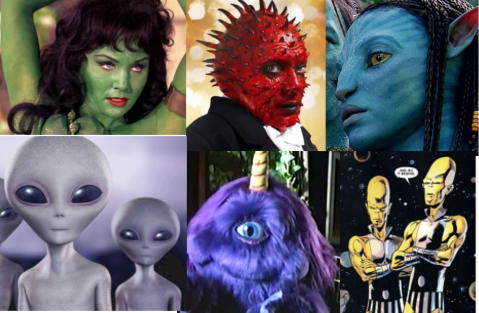 At the same time as I as mulling over that, I was thinking: this was a story about two groups, humans and Morrors, who didn’t understand each other. So perhaps that was partly because they’d evolved different ways of communication?

Those two thoughts led me to the idea of a creature that was a patchwork of rapidly changing colours, which, like a chameleon, conveyed messages to other members of its species.  I thought this was a nice inversion of the emotionless alien who is baffled by the strength of human feelings. As far as my Morrors were concerned, humans were the ones who didn’t seem to have feelings. How could they, when they don’t change colours?

I sketched an alien that had hundreds of eyes, which I imagined changing colour with its mood. Clearly such a creature would both see the world and express itself very differently from humans! 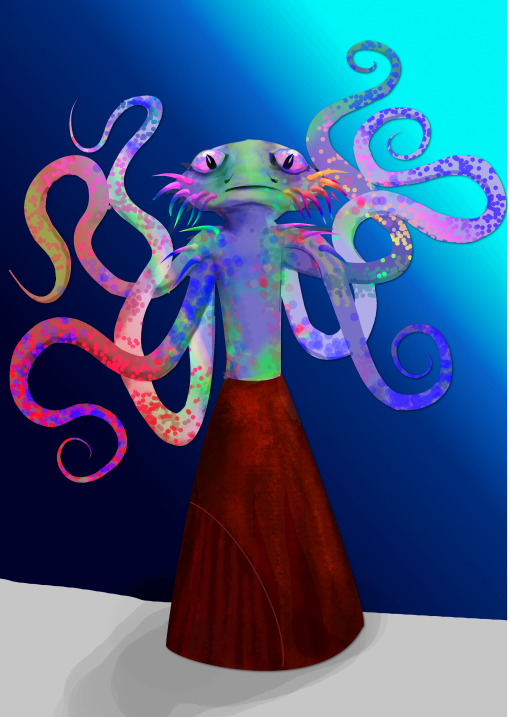 There was just one problem. It looked ridiculous.

It was a bobbly lump no matter how I reshaped it. I couldn’t think of it as a character, and if I couldn’t, no one else would. That’s one trouble of designing an alien – you don’t want it to look like a human, but if it doesn’t have something in common with human beings, it’s very hard to convey that it’s a person. So, rather sadly, I went down to two eyes. I added a newt-like face and long, waving tentacles. I didn’t want the alien the children encountered to be either a boy or a girl – I wanted it to be equally unlike (but also equally like) the boys and girls who were going to meet it. So that led me to the idea that alien sexes would be very different. The Morrors have five sexes, – Ruul, Thuul, Suth-laaa, Quth-laaa and Ma-lashnath.

So there were the Morrors, and there was Thsaaa, the first Morror to be seen by human eyes.

You have infringed and violated the sovereign territory and possessions of the Emperor and Empress of the Krakkiluk Expanse, may their love be ever passionate and fruitful. You are thieves and pirates. And you are all under arrest.”

In Space Hostages, instead of the aliens coming to Earth as invaders, the humans go to them, and find one not one but two civilisations, one of which is seriously annoyed by the humans’ arrival.

These aliens were going to be inspired by one of the bad things that has happened when people have, in real life, gone exploring. They take over stuff, and start empires. The Krakkiluks call theirs The Grand Expanse.

Now, I can’t pretend Evil Alien Empires are exactly rare in sci-fi, but I wanted mine to be a little different. Partly this was down to the way my aliens would look. If they were something more or less like crustaceans, why would they need clothes? But if they were people rather than animals, they would surely decorate themselves in some way, to express something about themselves and their civilisation.

Here’s what Alice sees when the Krakkiluks first board the ship she’s travelling on, the Helen of Troy.

They were about nine feet tall. They seemed more like crustaceans than anything else, with six limbs; marching—or scuttling—on four pointed feet and brandishing very nasty-looking weapons in their long, segmented arms. Their exoskeletons were a reddish pink, but that didn’t show much; they didn’t wear clothes, but every armored plate of their bodies was decorated or augmented in some way: either painted with elaborate patterns, or lacquered with inlaid enamel, or crusted with diamonds, or covered in spikes.

They’re also very good painters! One of them has a complex battle scene painted all over his thorax. I thought that maybe these big, pink, jewel-encrusted lobster people would be just a bit like Victorians and the British Empire. This means that when they’re not brutally conquering planets, they’re terribly soppy and fond of romance.

“Beloved! Tell me they have not hurt you. Speak to me, jewel of my heart, star of my venom bladder!”

“It is only a scratch, moonbeam of my soul,” said the one with the spikes, and then they embraced passionately, which is quite a sight to see when it involves eight-foot, six-limbed, highly armed, bejeweled lobster people.

It was fun to flip the usual thing that aliens say – “What is this thing you humans call Love”? on its head. The Krakkiluks know all about love.

Unfortunately, this won’t stop them shoving you out of the airlock.

You can buy Mars Evacuees here

Or you can by Space Hostages here

Check out this fab reading from Mars Evacuees by the brilliant Sophia McDougall! 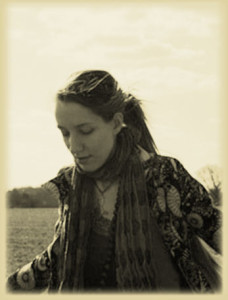 I’M SOPHIA MCDOUGALL. You can call my books sci-fi, fantasy, alternate history, no-genre-in-particular, or whatever else you want. I’ve written plays and poetry, and want to write in and across as many genres as I can before I’m through.

I want to say a huge HUGE thank you to Sophia for the brilliant guest post and to the always lovely Maggie at Egmont for the books and organising this fab guest post!

You are both stars!

Or maybe aliens from another planet?!  Who knows?!  🙂

Have you read Mars Evacuees or Space Hostages?  What did you think?  What would your alien species look like or be called?  I would love to hear from you!  Why not leave a comment using the reply button at the top of this post or tweet me on twitter using @chelleytoy !