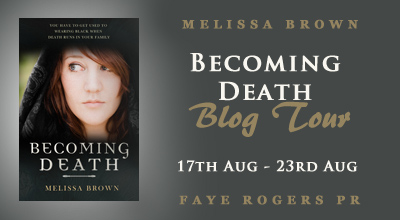 I have recently read this intriguing book Becoming Death by Melissa Brown and loved it and I am so over the moon to be part of the wonderful blog tour for this book!  This book had be enthralled and was just brilliant!

For my stop on the blog tour I am going to share my thoughts on the book and post a review!

A huge thank you to Faye Rogers and Melissa Brown for having me on this wonderful tour and for sending me the book to read.

Also check out a fab giveaway at the end of the post! 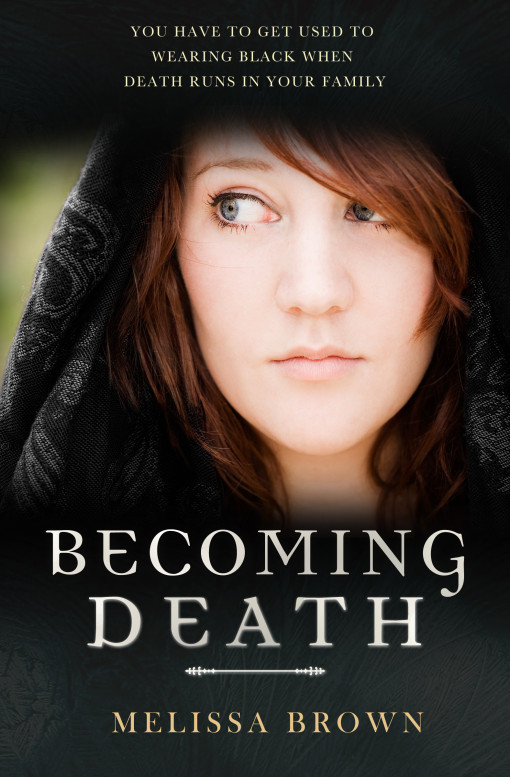 Ever since her father’s demise, Madison Clark knew death had her number. After losing her first job, she is ushered into the cryptic family business. Little does she know her family is hiding a dark secret; they are grim reapers, custodians of souls on their journey to the beyond. Madison expects her historic legacy to have benefits beyond immortality. What she doesn’t expect is to still be struggling for cash while reaping souls on the side.

As if being Death’s minion wasn’t strenuous enough, Madison finds herself back at school with her worst enemy studying the ancient rules, methods and paperwork of her vocation. In a cascade of life changes: her best friend admits he’s in love with her and she starts a new job as a professional mourner, but she can’t help thinking her family might have other secrets.

Just when things are finally starting to feel normal again Death throws her a curveball: her next victim is her best friend. Madison must find a way to overcome the strict guidelines of being a grim reaper in order to save his life.

Source – I was sent a copy of this book by the wonderful author Melissa Brown as part of the blog tour.  This does not affect my review or my opinions in any way and am delighted to write an honest review.  Thank you Melissa for sending this to me to read and to Faye for organising!

I raced through this book as if Death itself was chasing me!

“Grim reapers don’t exist.  They’re as fake as the tooth fairy and unicorns.”

Becoming Death tells the story of eighteen year old Madison Clark who after recently losing her job discovers a hidden family secret…she is a Grim Reaper!  That’s right!  Madison has to follow Deaths instructions and mark people for their fate!  This is by no means an easy task as Madison finds out especially when Death is in the modern age using an app called Dead Head which informs you of a new “Client” and with a handy instruction manual and Death watching Madison’s every move what could go wrong?!  When Madison finds herself a new job at the most unlikely of places it becomes a brilliant cover for her secret, but Madison is about to find out that Death does not play fair!

I mean can you imagine!  What if Death really had Grim reapers that look like you and me and as normal as ever doing his dirty work for him and marking you for death!

Becoming Death is told from the point of view of the main character Madison so as a reader we get to hear all of her thoughts and feelings when discovering her secret and whilst she is carrying out Deaths work!  She is a likeable character and I especially liked that she was a strong, feisty female lead.  I liked how her room mate and friendship with Aaron developed throughout the book.

I really enjoyed the whole premise of this book and the fact that Madison is given a “client” who she then has to track down using the Dead Head App and touch to mark them for death.  It was just brilliant.  I really got into the feel and flow of things when Madison has to mark her first few deaths and enjoyed the little back stories that was presented of the victims.  I did feel that this could have been expanded on with more people being marked for death and especially linked more with the new job Madison lands as a professional mourner (basically paid to attend funerals to make up the numbers).  We get to experience Madison marking strangers, work colleagues, and friends for death and discover a back story to her family and their secret!  And some of these deaths are gruesome! *shivers*

I loved the whole Dead App on your mobile being controlled by Death at the central hub RIP and sending through new randomly selected victims and the Reaping 101 training that Madison has to attend!  Again I felt this could have been expanded on slightly more to build up more of the story, but it provided a good information point for me as the reader and Madison as a character to learn about what was required of her, the do’s and don’ts and possible loop holes!

Amongst all of this there is a tinge of humour to this book.  One moment that made me giggle out loud was when Madison finds herself without her beloved Beetle car and has to ride a pink kiddie bike complete with a tacky plastic flower basket mounted on the front.  This is why I adored Madison as a character!

Another character I loved was Becca and also Madison’s sister which I would have loved to have seen more character development on.  Also the whole “Happy Mourners” job that Madison gets seemed to have more to come and some further character development with Derek the owner would have been brilliant and filled the story out more.  In fact if these area’s and the marking the victims were explored a little more then I feel this book may have had a different ending.

The ending was dramatic!  With Death on Madison’s case for not following through on certain orders it’s literally a race against time.  Again something that could have possibly been expanded on.  Like above some really strong plot points that I just would have loved to have seen developed a bit further.

Becoming Death is quite a short read, but I enjoyed it and it left me craving more.  A kind of Final Destination meets a backwards Pushing Daisies kind of feel.

I look forward to reading whatever Melissa Brown has up her cloak next!

I award this book 4 out of 5 Tales Of Yesterday Books!

You can buy Becoming Death here 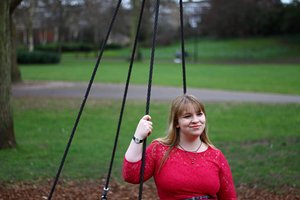 Melissa Brown an American author that lives in Norwich, England. She is a teacher in ICT skills, English and creative writing. In 2014, she was shortlisted for the IdeasTap Inspires: Writers’ Centre Norwich Writing Competition and longlisted for the Nottingham Writers’ Club’s inaugural National Short Story Competition. She was also a featured poet at the Norwich: City of Stories launch event, where she did a live reading of my poem ‘The Library.’ She enjoys films, books, comics, fangirling and subscription boxes. She blames her love of the written word on her hometown library and fanfiction. She lives with her partner, Kris, and her awesome cat, Hailey.

Melissa is also on Goodreads here

There is also a tour-wide giveaway!

This giveaway is open to UK participants ONLY.

Catch up on the rest of this fab blog tour!

An Awful Lot of Reading

The Whispering of the Pages

Have you read Becoming Death?  What did you think?  Has this review made you want to go grab a copy?  What would you do if you became a Grim Reaper!  I would love to here from you!  Why not leave a comment using the reply button at the top of this review or tweet me on twitter using @chelleytoy!