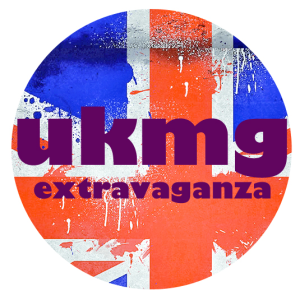 To celebrate the second UKMG EXTRAVAGANZA which is being held at Nottingham City Library on the 17th October 2015 there is a great big blog tour celebrating the 34 super-duper authors that are attending the event! 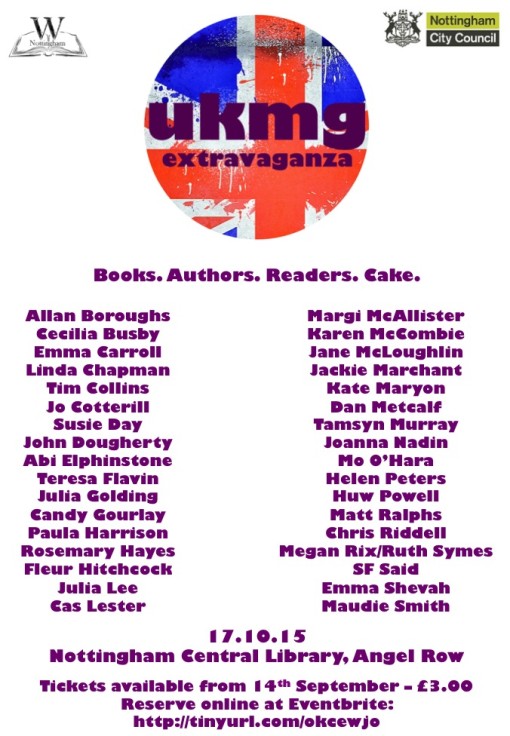 The wonderful Emma Pass and Kerry Drewery have organised the first UKMG Extravaganza and I am so excited to be attending this fab event!  It is set to be such a fun day and with such a brilliant set of UKMG authors attending the event I’m sure it will be a huge success!

In the meantime I thought I would share a bit about each author with links to their twitter and websites and links to their UKMG EXTRAVAGANZA blog tour posts that are being hosted by 34 fab bloggers!

What a huge blog tour!

The last UKYA Extravaganza was held in Birmingham and was so much fun!  You can find out what we got up to here! 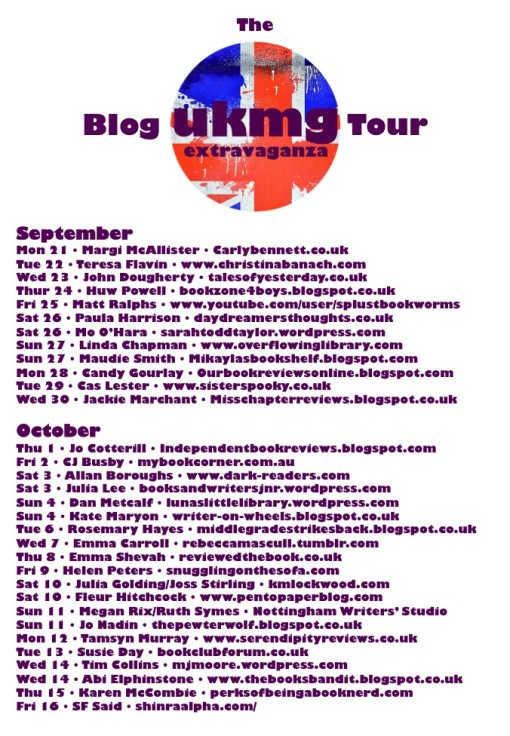 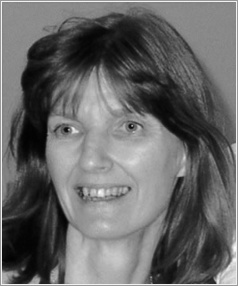 Margi comes from Northumberland, is married to a minister, and has three grown-up children. Margi has always loved storytelling and she is the author of the award-winning animal fantasy series, The Mistmantle Chronicles. She is also the author of the Hammy the Wonder Hamster books, which she wrote as Poppy Harris. Margi loves stories, theatre, gardens, wildlife, history, woodlands and warm fires on winter nights.

Her latest novels Fawn and A Home for Teasel are perfect for fans of Michael Morpurgo and Lauren St John, heartfelt animal stories unlike any you’ve read before.

You can find out more about Margi on her website here

Check out a fab Q&A with Margi over on writingfromthetub.co.uk with the lovely Carly ( @carlybennett ) here

Teresa Flavin is an illustrator and author of critically-acclaimed fantasy novels for children and young people. Her debut novel, The Blackhope Enigma (Templar Publishing UK), was short-listed for a number of UK book awards and was a Fall 2011 Junior Library Guild selection in the USA (Candlewick Press). The sequel, The Crimson Shard, is published in the UK by Templar and in the USA by Candlewick Press. It was a Fall 2012 Junior Library Guild Selection and was nominated for the 2013 Teen Choice Book of the Year. Templar published The Shadow Lantern, the final novel in the Blackhope Enigma trilogy, in the UK in 2013 and Candlewick published it in 2014.

In 2013 British publisher Barrington Stoke published Yellow Rabbit (Illustrated by Rich Watson) for a reading age of 6 and in 2014 it brought out Teresa’s latest novel, Jet Black Heart, a supernatural time travel mystery for teens.

American-born Teresa lives in West Yorkshire, England. She maintains a studio where she not only writes, but illustrates and makes paintings for gallery exhibitions. She also speaks widely in schools, libraries and at literary festivals.

Find out more about Teresa on here website here 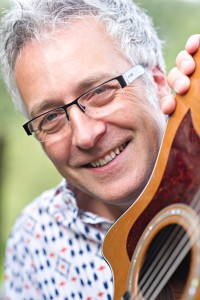 John Dougherty was born in Larne, Northern Ireland. He studied psychology at university and then tried his hand at a number of jobs including YMCA hostel worker, factory machine operator, and unsuccessful singer-songwriter, before becoming a primary school teacher (elementary school teacher if you’re in the United States, which he wasn’t).

Whilst John was teaching, his interest in children’s literature was reawakened and he soon began writing stories and pestering publishers with them. After the publication of Zeus on the Loose (2004) he left teaching and took up writing full-time, only with more tea breaks.

His books have been shortlisted for a number of prestigious awards – and one was chosen by The Times as one of the Best Children’s Books of the Year 2011 – but, more importantly, they make children giggle.

Check out my post here on Tales – Which Stinkbomb & Ketchup-Face Character Are you? – here 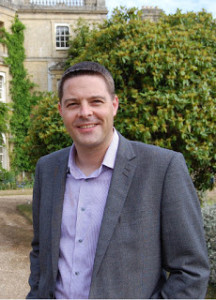 HUW POWELL is a children’s author with an overactive and uncompromising imagination. He was born in Bristol in 1976 during the hottest summer on record and grew up in the village of Pill in North Somerset, where he wrote his first stories for friends and family.

At school, his best subjects were Literature and Art, which he went on to study at University.

Huw started writing while working in London, where he wrote on trains and in cafes using a pen and notepad.

He now lives in Portishead with his wife and two energetic sons. When he’s not writing, Huw enjoys watching films and spending time with his family and friends.

You can find out more about Hew on his website here

Check out Hew’s super guest post over on bookzone4boys.blogspot.co.uk run by the lovely Darren Hartwell ( @BookZone ) all about Hew’s Magnificient Seven Pirates Of Literature here

Fire Girl author Matt Ralphs has always been fascinated by witches, ghosts and anything that sent a shiver down his spine – and as a child was convinced that his Suffolk home was haunted. His favourite childhood book was Enid Blyton’s The Enchanted Wood, as it was magical, mysterious and a little bit weird – and his goal as an author is to create books that make children feel just as happy, scared and thrilled as he did when reading as a kid. If he had to choose between being a witch or being a demon he would plump for the latter, as he believes it might be fun to be evil for a while – but Shhh – don’t tell anyone!

You can find out more about Matt here 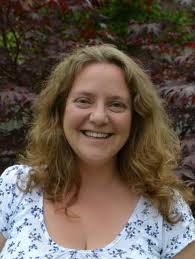 Paula Harrison is a best-selling children’s author. Her books include the Red Moon Rising series, The Storm Dragon and The Rescue Princesses. She wanted to be a writer from a young age but spent many happy years being a primary school teacher first.

I was born in Bletchley (home of the wartime code-breakers!) and I grew up in Bedfordshire. I always said I wanted to be a writer, but I didn’t actually get round to it for quite a long time.

I trained to be a primary school teacher and spent many years teaching. Those years taught me what children like in stories and how they respond to humour and suspense. Reading to an audience of children is just amazing.

You can find out more about Paula on her website here

Check out Paula’s Top Ten Places to find inspiration over on the daydreamersthoughts.co.uk run by the lovey Faye ( @daydreamin_star ) here 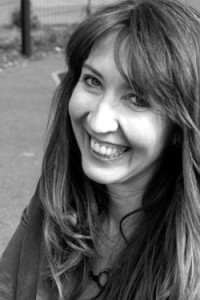 Originally from America, I moved to London because I wanted to live abroad but spoke no foreign languages. After a brief and unsuccessful stint as a serving wench at the Tower of London I found work as an actress and comedy performer. I’ve perfomed regularly at Edinburgh and London comedy festivals. A few years back I got a job touring around the UK as a storyteller and that’s when I discovered that kids liked, laughed at and didn’t fall asleep when I performed stuff that I wrote myself. I was hooked on writing and performing for kids. Some quotes from kids about my storytelling sessions are:

“I guess you were a bit better than the rabbits with big heads that were here last week.”
“Can I rewind you and watch you again after lunch?”
And “How did you know me to put me in your story?”

I still live in London, still speak no foreign languages (unless you count American) and I still have a sneaking suspicion that the rabbits with the big heads were really better than me but the kid was just being nice.

I wrote lots of stories for kids that nobody published but then I wrote “My Big Fat Zombie Goldfish” and Macmillan said that they were hooked. (couldn’t help the fish pun there, sorry).

You can find out more about Mo on her website here

Check out a fab Q&A with Mo over one sarahtoddtaylor.wordpress.com – here 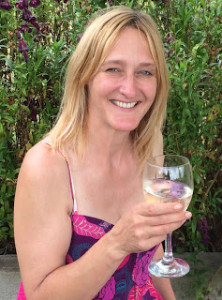 Linda Chapman was born in Liverpool in 1969. She had many different jobs before becoming a full-time writer in 1999. She worked as a theatre stage manager, a dog trainer, a bookseller, a nanny, a teacher and a research assistant. She has written over 170 books for children, some under her own name, others under different names including the Superpowers series under the name Alex Cliff. Her books have been published in over 20 languages. Linda lives in Leicestershire with her husband, three children, three dogs and three ponies. When she is not writing she likes riding, reading, walking her dogs and visiting schools and libraries. She has written many different series including: My Secret Unicorn, Unicorn School, Stardust, Sky Horses, Not Quite a Mermaid, Skating School and Loving Spirit. She also loves to collaborate with other writers. Her most recent series are Sophie and The Shadow Woods written with Lee Weatherly and the series Dinosaur Land, Wild Friends and Angel Wings written with Michelle Misra.

You can find out more about Linda on here website here

Check out this fab guest post about writing from Linda over on overflowinglibrary.com run by the lovely Kirsty ( @overflowingklc ) – here

Check back tomorrow for more updates….