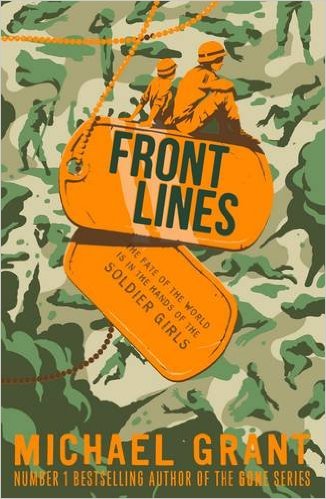 Today, 28th January 2016, marks the release of the brilliant Front Lines by the awesome Michael Grant!

I am lucky enough to have received a copy from the lovely people at Electric Monkey and judging from what I have been hearing about this book I cannot wait to read it!

Today I am so over the moon to have the awesome Michael Grant on Tales with a fab Q&A! 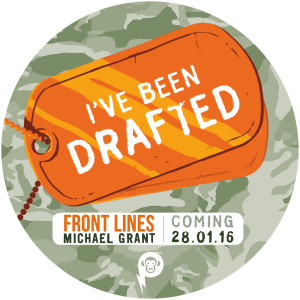 Hi Michael!  Welcome to Tale Of Yesterday!  I am so excited to have you here!

Firstly a little about the wonderful Front Lines… 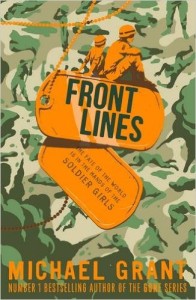 It’s WWII, but not as you remember it from history lessons! This time the girls aren’t stitching socks for the brave boys at the front. Meet Rio Richlin and her friends Frangie Marr and Rainy Schulterman, three of the newest recruits in the US Armed Forces. They stand shoulder to shoulder with the boys from home as they take on Hitler’s army.

In the face of reluctant colonels and sceptical sergeants, the soldier girls must prove their guts, strength, and resourcefulness as soldiers. Rio has grown up in a world where men don’t cry and girls are supposed to care only about ‘money and looks’. But she has always known that there is something wrong with this system and something else in her. Far from home and in the battlefields, Rio discovers exactly who she is and what she can accomplish.

Can you tell us a little about Front Lines?

FRONT LINES is an alternate history of the American experience of World War 2 in Europe. I make one big change: I imagine a Supreme Court decision has made women eligible for the draft and service in combat.  From there I follow three young women – girls, really – who enlist.  Rio Richlin becomes a combat soldier, Frangie Marr is a medic, and Rainy Schulterman joins Army intelligence.

What inspired you to write about an alternate World War II where young women are called up to fight alongside men?

Basically I thought it would be a fun way for me to take the history everyone thinks they know and look at it through a very different lens.

Can you tell us a little about the main character Rio Richlin?

Rio is inspired in part by Audie Murphy, a little guy, just 5’5”, who no one thought should be in combat, but who went on to become the most decorated American soldier in the whole war. Rio is under age, she’s a girl from a small town, her father runs a feed store, and her mother has a small dairy operation.  She’s not special or secretly a wizard and she has no powers.  She’s a typical small town girl who gets swept up in the biggest war in human history.

How important are names to you? Did you pick any of the characters names in Front Lines (or any of your books) for a reason?

I’ve learned a trick over time: use names that are easy to Google, unique names.

Oh, I love action scenes. Those are always my favourite things to write.

Do you see yourself in any of the characters in Front Lines (or any of your books) or have you used any of your own experiences in any stories?

I mostly avoid putting myself or anyone I know into any book. So none of the characters are me.

If rumours are true we may be seeing Front Lines on the big screen? If you could cast your characters from Front Lines in a big Hollywood film adaptation who would you choose?

I have no information on a movie deal, I’m afraid. I’d love to see it happen, but Hollywood sadly does not take orders from me.  As for casting, I don’t really know any actors.  I mean, would I love to see Chloe Grace Moretz doing a GI version of Hit Girl?  Uh, yeah, who wouldn’t? 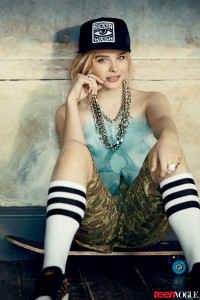 What would you like your reader to take from Front Lines?

I don’t think along those lines much. I’m basically an entertainer, I’m not a teacher.  So if my stories entertain you, cool, my work is done.

I was shocked (in a OMG….my childhood….I can’t believe it way) to hear at a recent event that you ghost wrote some of the Sweet Valley High books! Dum dum duuuuummmm! I did not know this!  Therefore we would love to know a little bit more about you!  Can you give us 5 random facts we don’t know about Michael Grant?

2) I moved in with my wife 24 hours after seeing her through a window.

3) Ialso wrote a series called Barf-O-Rama, under a pseudonym.

4) I quite like being bald, I wouldn’t change it.

5) I would move to London in a heartbeat if I thought I could survive the overcast skies.

Which of your characters from any of your books would you most like to spend the day with?

Astrid from the GONE series. She’s smart, she’s manipulative, she’s a little bitchy, she’s blond. . . In short, she reminds me of my wife.  And I like my wife. 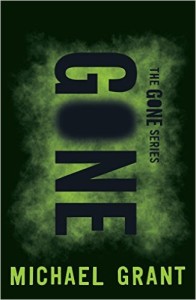 I didn’t want to be a writer growing up, I didn’t start until I was in my 30’s. I knew I could write, which sounds arrogant, but I knew it.  I just didn’t want to, because I wanted to be the hero, not just write about the hero.  It took me a while to get over that.

Do you have any favourite world war II reads?

Rick Atkinson’s Liberation Trilogy is what got me thinking about writing about WW2. 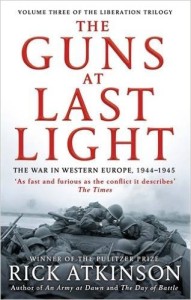 And Elizabeth Wein’s brilliant Code Name Verity set the bar pretty high and I was challenged to clear it. 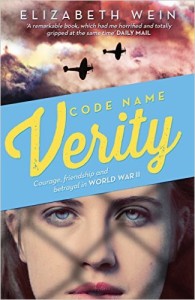 Zebulon Finch, by Dan Kraus. What a great book, what great characters. 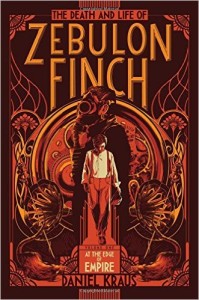 I’m actually re-reading the Flashman series by George MacDonald Fraser. He uses sex and humour to paint genuinely moving portraits of great historical events and figures. The guy was brilliant.  The whole series is a work of genius. 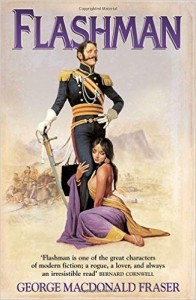 It’s my wife’s book, Crenshaw, by Katherine Applegate, of course. 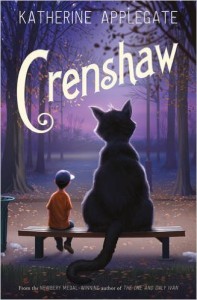 After seeing you and Andrew Smith together at an event this year I think you should write a book together!

Oh, Andrew and I would commit mutual murder if we wrote together. He’s a planner, I’m an improviser.  He’s meticulous, I’m all about momentum.  He’s an artist, I’m just a storyteller.

I start with what I call a Series Bible. This is a document that is part sales pitch for my editor, part overview of the project.  It forces me to think through the concept, though not the story.  In my series bible I’ll have an elevator pitch, thoughts on marketing, thoughts about the psychology and philosophy of the book, character descriptions with photos I pull off the web, locations, etc…

I use that series bible to convince my editor I have a general idea what I’m doing. Then she signs me up, and I start work.  I start at the beginning, usually with no idea at all what’s happening next, let alone how it will end.

I have developed this need to write out of doors. Normally I sit in a rocking chair on my deck, which looks out over San Francisco Bay.  If it’s too cold or wet I drive to the Marin Headlands and work in my car.  I drink a whole lot of coffee, smoke a cigar, sometimes write while I have punk or reggae in my ear buds.

Did music have any influence the story of Front Lines or any of your books?

I don’t so much enjoy music, or get inspired by it, as use it.  It’s a tool. I use it to get myself fired up.  It’s my musical cattle prod.

I know Front Lines is a planned trilogy. Are there any exciting plans for 2016?

I have already finished Book 2: Silver Stars. January 26, 2016 is Book One, and the next book drops a year later.

And finally when I are you coming to England again?!

As soon as Egmont wants me there. I love the UK.  Do you know what my current TV viewing consists of?  Downloads of British panel shows like QI, 8 out of 10 Cats, and my favourite, Would I Lie To You?  I am a huge fan of David Mitchell, Lee Mack, Stephen Fry, Jimmy Carr and more.  And of course my addiction to The Great British Bake-Off is well known, especially since in the last series I picked three bakers right at the start who became the final three.  I feel I should have gotten at least a cupcake or a petit four for that feat of prophecy.

Or maybe you could be on The Great British Bake Off!

Thank you so much for answering all of my questions Michael it’s been brilliant to have you here!

You can buy Front Lines by Michael Grant here or why not visit your local independent bookshop for a copy. 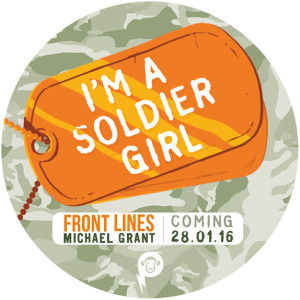 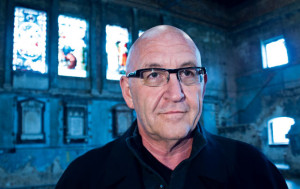 Michael Grant has always been fast-paced. He’s lived in almost 50 different homes in 14 US states, and moved in with his wife, Katherine Applegate, after knowing her for less than 24 hours. His long list of previous occupations includes: law librarian, cartoonist, bowling alley mechanic, restaurant reviewer, waiter, documentary film producer and political media consultant.

Grant and Applegate have co-authored more than 100 books, including the massive hit series Animorphs. Grant went on to write The New York Times and international bestselling series, GONE. His BZRK series takes participants on a roller-coaster ride across print and digital venues. His latest series, MESSENGER OF FEAR, is a morality tale, though since it’s written by Michael, the morality may be quite muddy at times. Front Lines, his latest thriller, will leave you turning pages far into the night. It is a reimagining of World War II

Sony and the creative team behind multi award-winning Breaking Bad optioned the TV rights for GONE in August 2013.

Michael, Katherine and their two children live in the San Francisco Bay Area, not far from Silicon Valley. He can be contacted via Twitter @MichaelGrantBks, and www.facebook.com/authormichaelgrant.

It’s hard to come up with a tagline for such a man. We like ‘Michael Grant is the evil genius of YA fiction‘ but Michael came up with a couple of ideas of his own.

You can buy Front Lines by Michael Grant here

Another huge huge thank you to Michael for agreeing to a Q&A and to Alice and Egmont for organising!

Are you a Michael Grant fan?  Have you read Front Lines?  What did you think?  Has this Q&A intrigued you?  I would love to hear from you!  Why not leave a comment using the reply button at the top of the page or tweet me on twitter using @chelleytoy !