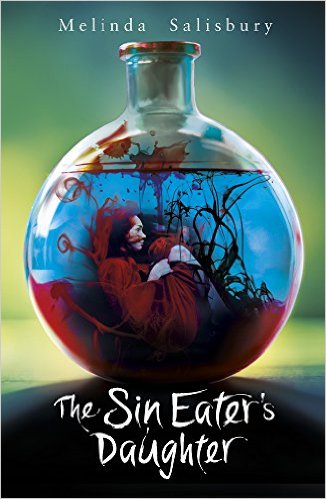 Seventeen-year-old Twylla lives in the castle. But although she’s engaged to the prince, Twylla isn’t exactly a member of the court. She’s the executioner. As the Goddess embodied, Twylla instantly kills anyone she touches. Each month she’s taken to the prison and forced to lay her hands on those accused of treason. No one will ever love a girl with murder in her veins. Even the prince, whose royal blood supposedly makes him immune to Twylla’s fatal touch, avoids her company. But then a new guard arrives, a boy whose easy smile belies his deadly swordsmanship. And unlike the others, he’s able to look past Twylla’s executioner robes and see the girl, not the Goddess. Yet Twylla’s been promised to the prince, and knows what happens to people who cross the queen. However, a treasonous secret is the least of Twylla’s problems. The queen has a plan to destroy her enemies, a plan that requires a stomach-churning, unthinkable sacrifice. Will Twylla do what it takes to protect her kingdom? Or will she abandon her duty in favour of a doomed love?

I originally received a proof of this book from the wonderful people at Love Reading 4 Kids followed by a finished copy from the publisher Scholastic.  This was then followed by me buying several copies of this book!  This does not affect my review or my opinions in any way and am delighted to write an honest review.  Thank you all for sending / giving this to me to read!

Reading fantasy is normally really out of my comfort zone, but Melinda Salisbury’s debut, The Sin Eater’s Daughter, about a girl who can kill with a single touch, drew me into a world full of imagination, corruption and love and it hasn’t let me go ever since.

The Sin Eater’s Daughter tells the story of Twylla.  Twylla is the daughter of the Kingdom’s Sin Eater who eats peoples sins in the form of food when they die.  Brought to the Kingdom of Lormere by the King and the evil Queen she it betrothed to Prince Merek (*swoons*), but is also the perfect weapon with the Queen advising her Kingdom that Twylla has been chosen by the Gods to be Daunen Embodied and can kill anyone with a single touch.  This is proved to the Kingdom by Twylla drinking the Morningsbane poison every harvest proving that the Gods have chosen her.  Under the constant protection of her guards, including new guard Lief from the enemies town Tregellan (*swoons*), Twylla starts to question the Queens motives and reasoning’s behind the executions that Twylla is asked to perform and in the process learns to love.

I instantly connected with this world and it’s characters.  I could actually imagine this world being part of our past and history.  It felt very real to me as if these moments in history had actually taken place in the past.  This entangled with a fairy-tale-esque world made me envision everything so clearly and it gave me the feelings of being a child and reading the fairy tales of old and being swept away by them completely.

I loved Twylla as a character.  Melinda Salisbury does a fantastic job, which is credit to her writing, of making you feel exactly what Twylla does.  You feel her pain of having to perform these executions, you feel her fear of the Queen, you feel every little tummy flip and every torn thought in her mind.  I felt for her completely and as a reader I wanted the best for her.

On the other side of the coin you have the Queen.  Within the first few pages my tummy filled with fear.  Her presence, even when she is only suggested and spoke about on the page, made me cower in fear and for what was going to happen next.  She is so cold, calculating and really quite heartless.  One scene that sticks fully in my mind and made me realise just what the Queen was like happened very early on in the book when a court member dares to speak over Twylla singing during a banquet (and possibly a little out of turn) so much so that the Queen takes a dislike to it.  Quite calmly and casually the Queen tells him to leave by foot through the woods that surround the castle.  She gives him a head start and then asks the guards to send the viscous dogs after him casually as if she is asking someone to pour more wine or batting a fly away.  Oh she is so evil!

Amongst all of this there’s also a very swoon worthy love triangle in the mix.  There’s the gorgeous new guard Lief who is as much mysterious as he is handsome and Prince Merek who is devoted to his Kingdom and his betrothed, Twylla.  Melinda Salisbury writes some very very swoony scenes indeed which made my cheeks flush red and made me fall deeply in love with both of these characters.  I don’t want to give too much away so I will leave it there but at an event I attended with Melinda she mentioned that she would cast these two actors in a movie / TV adaptation…. 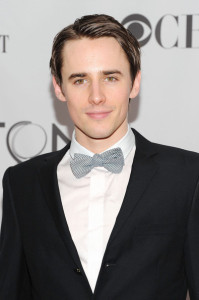 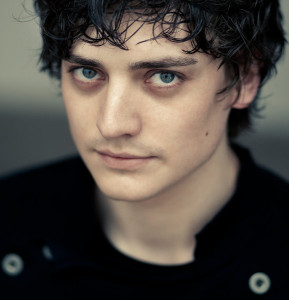 Oh sorry……better get back to the review!

One of my favourite scenes has to be the Hall Of Mirrors….It was just so cleverly crafted and written I felt like I was there, hiding and trying not to be seen.

I also loved the threads of story Melinda Salisbury has threaded into the mix in a very clever way indeed.  The story of The Sin Eaters Daughter lead me to question things happening in this fictional world with a massive twist along the way and left me craving…no actually demanding more!

The title of the next book in the series is called The Sleeping Prince.  Thinking back after hearing this title made me realise aspects of the fictional history that Melinda Salisbury has created about the Sleeping Prince throughout The Sin Eaters Daughter make this a highly anticipated read for 2016!

(You can check out my review of The Sleeping Prince here)

You can buy a copy of this book here or why not visit your local independent book shop for a copy?

Check out my review of the second book in the trilogy, The Sleeping Prince here

Find out about an evening with Melinda Salisbury here 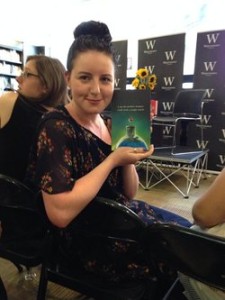 Melinda Salisbury lives by the sea, somewhere in the south of England. As a child she genuinely thought Roald Dahl’s Matilda was her biography, in part helped by her grandfather often mistakenly calling her Matilda, and the local library having a pretty cavalier attitude to the books she borrowed. Sadly she never manifested telekinetic powers.

She likes to travel, and have adventures. She also likes medieval castles, non-medieval aquariums, Richard III, and all things Scandinavian. The Sin Eater’s Daughter is her first novel, and will be published by Scholastic in 2015. She is represented by the amazing Claire Wilson at Rogers, Coleridge and White.

To find out more about Melinda Salisbury check out her website – www.melindasalisbury.com

Have you read The Sin Eater’s Daughter?  What did you think?  Are you Team Lief or Team Merek?  Are you excited for The Sleeping Prince?   I would love to hear from you!  Why not leave a comment using the reply button at the top of the page or tweet me on twitter using @ChelleyToy