This blog post is about one authors fight against cancer and how we are trying to help.

“I thought the blog might be therapeutic for me, and something I could hopefully look back at a year or two down the line to remind me of what I’ve come through,” said Tommy. “So

for it to have resonated with so many people, who’ve taken the time to contact me and send me well-wishes is incredibly touching.” 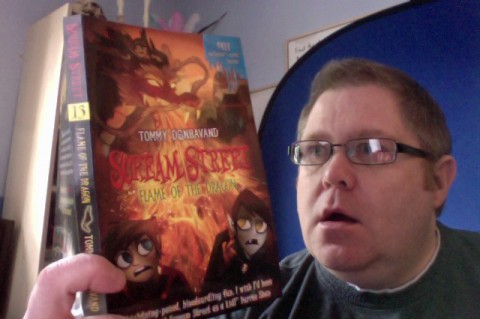 Tommy is the author of almost 100 books, including the best-selling Scream Street series, Fangs: Vampire Spy and several novels for dyslexic and struggling teenage readers.

Tommy has appeared at top literary festivals and has performed events for tens of thousands of children in schools across the country over the years.

His first book, the non-fiction title, Quick Fixes For Bored Kids, was published in 2001.

He is currently working on several new books, despite undergoing treatment.

Before becoming an author Tommy performed in the West End production of Buddy – The Buddy Holly Story for several years, becoming the show’s longest-serving cast member.

Both his parents were victims of cancer, so Tommy has personal experience of the daunting challenges he faces.

We are organising a blog tour to help raise awareness of Tommy’s fight against cancer.

The #TommyVCancer blog tour will start on the 1st  June 2016 and run till the end of the month.

We hope to help raise money for Tommy to support him during this difficult time.

We are looking for as many authors and book bloggers as possible to take part in the #TommyvCancer Blog Tour.

Every one involved will review a book written by Tommy, as well as including information on how they can help support Tommy.

You can find more information on how we can support Tommy below.

Anyone wishing to be involved in the blog tour should contact the lovely Viv at vivienne_dacosta@hotmail.com who will collate all the requests, working with Faye Rogers to organise a plan for the tour.

Please feel free to email about any other ways we can fund raise for Tommy and his family also.