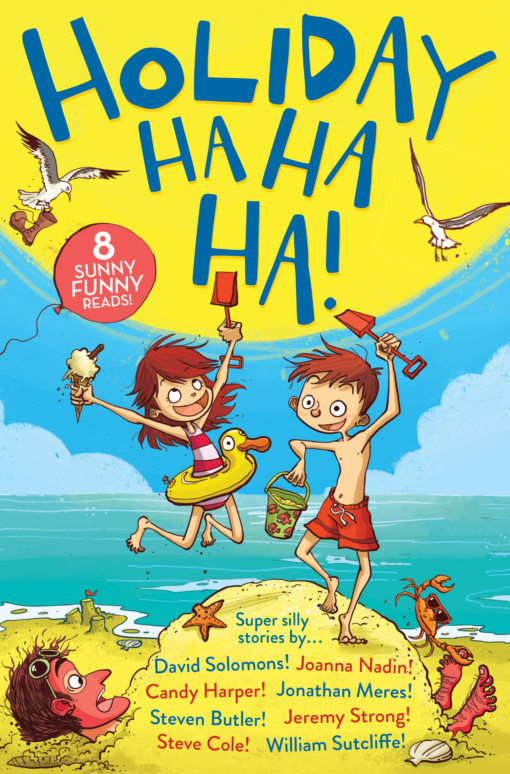 I am super excited to have been asked to be part of the blog tour for this brilliant MG anthology of eight sunny funny stories by eight brilliant authors, in Holiday Ha Ha.

From amazing aliens and strange superheroes to fantastic forests and crazy creatures; from ghoulish ghost tours and tiresome traffic jams to super spies and terrible talent shows – you’ll be laughing all summer with these eight summer sillies!

A huge thank you to Hannah from Simon & Schuster for having me on this wonderful tour and for sending me a copy of the book.

For my stop on the blog tour I have an hilarious guest post from one of the fab authors in this anthology and Waterstones Children’s Book Prize Winner, the super funny David Solomons!

David’s holiday memory made me laugh and also eeekkkk all at the same time!

So sit back, grab an ice cream, relax in that deck chair and be prepared to laugh…..a lot! 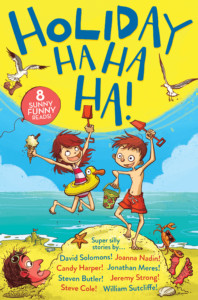 Get ready to laugh your summer socks off with this collection of hilarious short stories – from disastrous car journeys to super-powered grannies to gruesomely funny ghost hunters there’s something for everyone in this side-splitting anthology! Featuring a stellar line-up of much-loved authors including Steve Cole, David Solomons, Joanna Nadin, Jeremy Strong, William Sutcliffe, Steven Butler, Candy Harper and Jonathan Meres.

Anyone born after the invention of the powered electric window cannot ever truly understand the true horror of the holiday car journey. This is a story of in-car entertainment, in the same way that Watership Down is a story about fluffy bunnies.

I was seven years old, probably wearing a colourful tank top. It was Scotland in the 1970s. My family, consisting of Mum, Dad and my little sister, Jacqui, were driving northwards from our Glasgow home. Destination: Crieff Hydro in Perthshire for a week of our precious summer holiday. These days, a luxury destination, but back then there remained a whiff of its invigorating Victorian origins. Cold water treatments, bracing walks, no Wi-Fi for, ooh, another 30 years. But all those delights were in front of us!

For the present we were speeding along the A9. I say speeding, but in truth we were whining – that would be both the car and its occupants – confined in the reverberating tin drum known as a Fiat 128. My dad has always fancied himself as a boy racer. He puts the Fiat down to an aberration. When quizzed he says it was Italian, y’know, like a Ferrari. But then his voice sort of tails off to an embarrassed mumble. First off, it was in a colour strangely omitted from every car paint chart produced since 1975. In brochure speak it was the classic mostarda. To you and me, mustard. Truly hideous. But it was about to get a makeover, courtesy of a local resident of the Perthshire countryside. Now if after that teaser you’re jumping ahead and imagining a gory and inappropriate twist to this amusing anecdote, I’d just like to say, you’re right. No people were harmed in the making of this story. Beyond that, I’m not making any promises, so if that worries you, then stop reading now.

Imagine a typical family of four stuck in a hot car for hours with only a weedy radio blasting out Scottish dance tunes (probably) in mono. Smartphone? Seatback-mounted iPad? Hah! The only screen we could look at was the windscreen. So let’s talk about air conditioning. Get this. You wound the windows up and down with a handle. A handle! (I’m told that some super-duper-expensive cars these days still have a window-handle in order to make them lighter so they can go faster. Trust me; the Fiat’s was not a weight-saving measure).

So there we are, fourteen arguments and three “I won’t tell the pair of you again!” later.

Boy Racer Dad has got the mustard machine up to sixty. We’re flying.

We’re not the only one.

Not that we know it, but at that exact moment fluttering towards us is a grouse. A bird that inhabits pine forests, moorland and mountainsides. It has feathered nostrils and toes. We’re talking one hairy bird. Anyway, this one’s doing its best impression of Tom Cruise in Top Gun. Fast, low, weapons hot.

Meanwhile, the unfeasibly high speed we’ve topped out at has made the interior of the Fiat even hotter than usual. But as anyone knows, you can’t open a window at speed without causing terrible turbulence. Nevertheless, at that moment, yours truly decides he needs some fresh air. I’ll just open it a–

Have you ever tried to get grouse guts out of velour seats? I haven’t. I was too busy trying to get them out of MY HAIR! MY EYES! MY MOUTH!

The bird had flown smack bang into the tiny crack I’d opened in the window. Never mind Top Gun, that was Luke Skywalker hitting the thermal exhaust port of the Death Star. Sort of.

I will never erase the sight and smell from my memory.

My other vivid recollection is of another car slowing down, pulling off the road and stopping, its driver leaping out, scooping up the carcass and driving off with it. Proving that one boy’s summer holiday horror story is another man’s dinner. 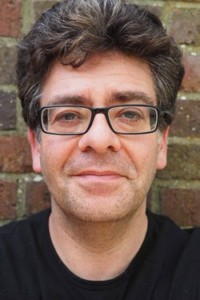 David Solomons has been writing screenplays for many years. His first feature film was an adaptation of ‘Five Children and It’ (starring Kenneth Branagh and Eddie Izzard, with gala screenings at the Toronto and Tribeca Film Festivals). My Brother is a Superhero was his first novel for children, and it won the Waterstones Children’s Book Prize 2016. He was born in Glasgow and now lives in Dorset with his wife, the novelist Natasha Solomons, and their son, Luke. 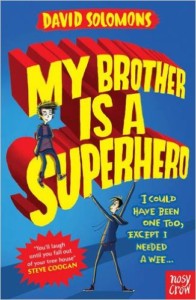 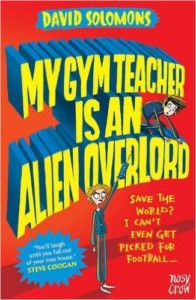 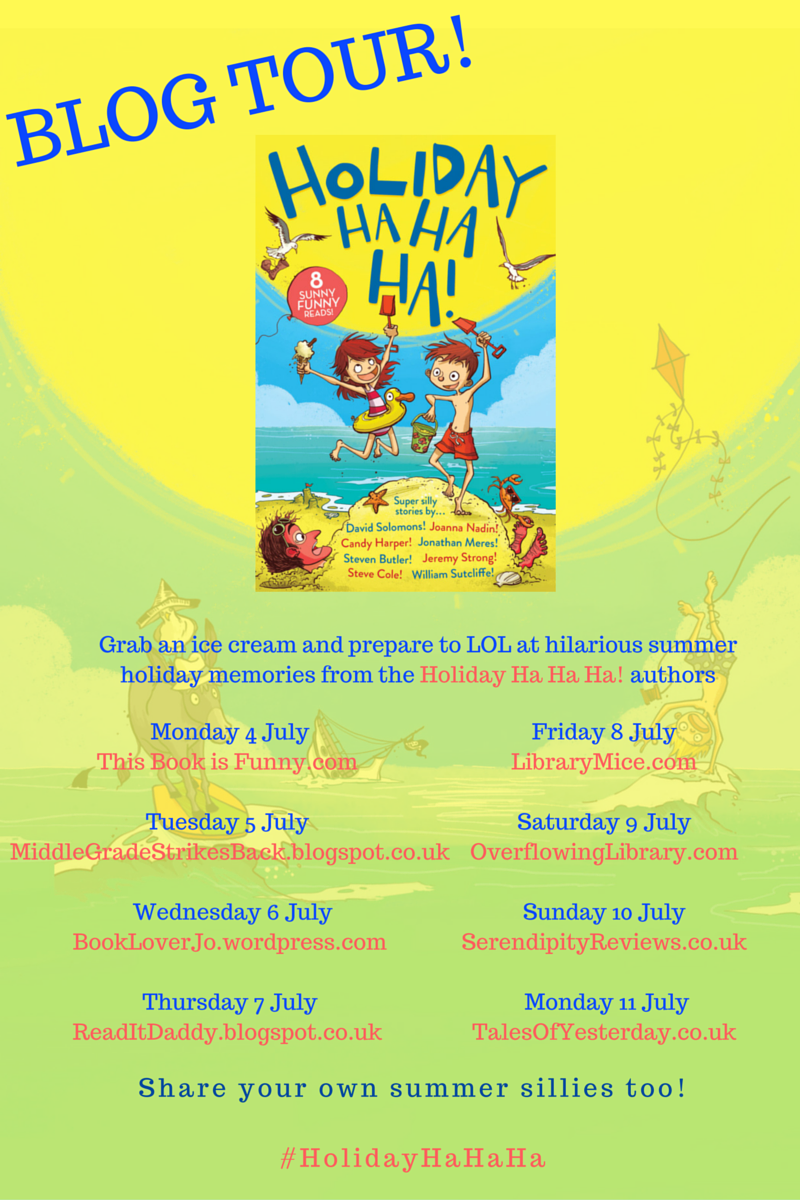 A huge huge thank you to David for sharing a holiday memory that he has never forgotten and to Hannah for organising!

Have you read Holiday Ha Ha?  What did you think?  Do you have any funny holiday memories?  I would love to hear from you!  Why not leave a comment using the reply button at the top of this review or tweet me on twitter using @chelleytoy!