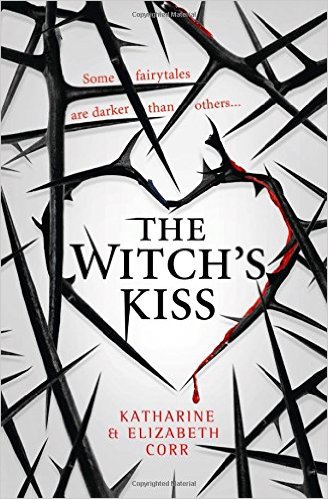 I am over the moon to have been asked to be part of the blog tour for this intriguing fantasy witch-y YA, The Witches Kiss by Katharine and Elizabeth Corr.

I literally cannot wait to read this book!  The title in itself is full of intrigue and that cover!  Hats off to Lisa Brewster for this fab design – you can find an interview with Lisa here!

The Witches Kiss was released on the 30th June 2016 published by Harper Collins Children’s Books.

A huge thank you to Vicki from Harper Collins and Katharine and Elizabeth for having me on this wonderful tour and for sending me a copy of the book.

For my stop on the blog tour, which is the final stop of the tour ,I asked Katharine and Elizabeth for their favourite literary curses!

Read at you peril! 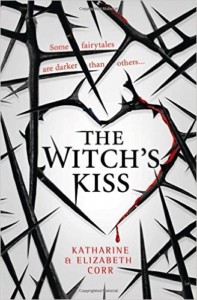 Can true love’s kiss save the day…?

Sixteeen-year-old Meredith is fed-up with her feuding family and feeling invisible at school – not to mention the witch magic that shoots out of her fingernails when she’s stressed. Then sweet, sensitive Jack comes into her life and she falls for him hard. The only problem is that he is periodically possessed by a destructive centuries-old curse. Meredith has lost her heart, but will she also lose her life? Or in true fairytale tradition, can true love’s kiss save the day?

Curses are staple ingredients of fantasy and fairy tales. We have three (sort of) curses in The Witch’s Kiss: the curse that turns our prince into a monster, the enchantment that binds him to the evil wizard, and the oath that compels Merry (our hero) to deal with the consequences of the curse in the twenty-first century. So for this, the final stop on our blog tour, we decided to look at our favourite literary curses…

‘And unto Adam he said, because thou has hearkened unto the voice of thy wife, and hast eaten of the tree, of which I commanded thee, saying Thou shalt not eat of it: cursed is the ground for thy sake; in sorrow shalt thou eat of it all the days of thy life…’ 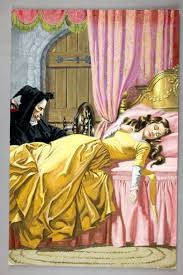 Thanks to Disney, pretty much the entire universe is familiar with this one. An evil fairy, in retaliation for not being invited to Briar Rose’s christening, puts a curse upon the baby girl: when she reaches her sixteenth birthday she will prick her finger upon a spinning wheel and die. A good fairy attempts to overturn the curse, and although she’s unable to do so, she is at least able to dial it down a smidge. Instead of dying, Briar Rose is doomed to fall into an enchanted sleep for 100 years. And she can only be woken up by a kiss from the son of a king. Somewhere along the way from the original versions of this tale, ‘true love’ was added to the mix, just to make things that extra bit harder (as if snagging royalty wasn’t enough all by itself…).

Beauty and the Beast 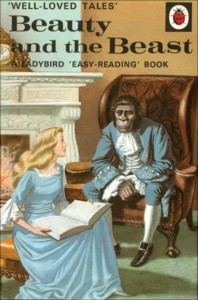 As with most fairy tales, there are multiple versions of this particular story. The most famous one (again, thanks Disney!) is the version where the young prince falls victim to a dark curse. One day an old women comes to the castle, asking for shelter from the rain. The prince refuses, whereupon the old woman is revealed to be a powerful fairy. She turns the prince into a hideous beast, declaring that he will only return to his true form upon finding (you guessed it) ‘true love’. Which luckily he does. Still, these fairies! Vengeful lot.

“Never used an Unforgivable Curse before, have you, boy?” she yelled. She had abandoned her baby voice now. “You need to mean them, Potter! You need to really want to cause pain – to enjoy it – righteous anger won’t hurt me for long – I’ll show you how it is done, shall I?”

Not curses in the strictest sense of the term, but three spells so dark that (as discussed in The Goblet of Fire) their use results in automatic incarceration in Azkaban – at least until legalised during the Second Wizarding War. The three curses are the Killing Curse (Avada Kedavra); the Cruciatus Curse (Crucio) for inflicting intense pain; and the Imperius Curse (Imperio) for controlling the actions of another. 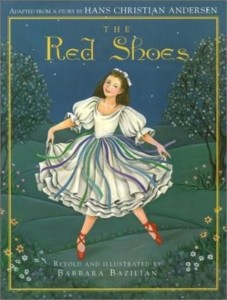 Hans Christian Andersen’s fairy tale is essentially a morality tale: a warning against the dangers of vanity. It’s also exceedingly grim. And unlike most other literary curses, it has nothing to do with true love.

A young girl, Karen, repeatedly wears her beautiful red shoes to church when she shouldn’t. Karen is vain and selfish and cares little for her adoptive mother; even when the mother is dying Karen goes to a party, once again wearing the beautiful dancing shoes. As a result, she is cursed to dance in her beautiful shoes forever, even after her death, as a warning to vain children everywhere. Eventually the curse is lifted, but not until Karen has had her feet chopped off, has had her way to church barred by her own still-dancing feet, and has died. Lesson learned, we imagine.

In Joan D Vinge’s fantasy romance the evil Bishop of Aquila, a spurned suitor, curses two lovers to spend an eternity apart, whilst at the same time always being together. The knight Navarre is a man by day and a wolf by night. His lover, the beautiful Isobelle, is a hawk by day and a woman by night. Therefore they are never together in their human form, except for during a few moments between dawn and dusk. To break the curse the lovers need to face the Bishop together on a day when there is no night and a night when there is no day. Luckily, fate intervenes in the form of a solar eclipse and at the right moment the lovers face the bishop and break the curse. One of our favourite books whilst growing up. 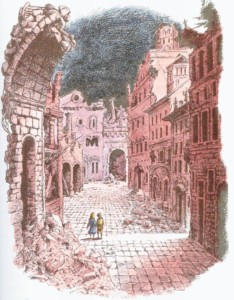 In The Magician’s Nephew, friends Digory and Polly arrive in a world lifeless but for one inhabitant: the Empress Jadis, who reappears in The Lion, The Witch and The Wardrobe as The White Witch. The children learn that the destruction around them is the result of a curse. When Jadis was about to be defeated by her sister she spoke The Deplorable Word, a curse that wiped out all life on her world – literally, everything – and put her into an ageless sleep. What a relief Lord Voldemort didn’t know that one.

You can buy a copy of The Witches Kiss here or from your local book shop! 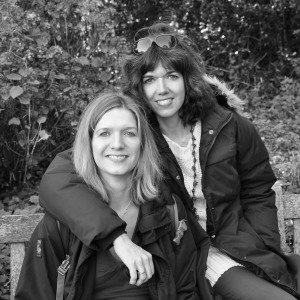 We are sisters and best friends (try writing a book with someone else and you’ll see why that last bit is kind of important). After spending our childhood in Essex, we now live ten minutes away from each other in Surrey. We both studied history at university and went to work in London for a bit. Then we stopped working to raise families, because somehow we missed the memo explaining that children are far more demanding than clients or bosses. When we both decided to write novels – on account of fictional people being much easier to deal with than real ones – it was obvious we should do it together.

Stuff we both like: YA / non-YA fantasy and science fiction,Star Wars, Star Trek, each other (most of the time).

You can find out more about Katharine and Elizabeth on their website – www.corrsisters.com

Catch up on the rest of the blog tour at the below stops!

Have you read The Witches Kiss?  What did you think?  What are your favourite literary curses?  I would love to hear from you!  Why not leave a comment using the reply button at the top of this review or tweet me on twitter using @chelleytoy!