Home Contemporary Guest Post – The Secret’s Out! – Cooking Is For Everyone by Laurel Remington I am super excited to have the wonderful Laurel Remington Winner of the Times Children’s Fiction Competition 2015 and author of the scrumptious The Secret Cooking Club on Tales today!

The Secret Cooking Club was released on the 4th August 2016 published by Chicken House and with the Bake Off starting last night I think this will be the perfect book to fill the time between episodes and beyond!

A huge thank you to Laura for sending me a copy of the book and for organising this fab guest post today!

So today Laurel Remington tells us how cooking is for everyone…..

And it really is…..not only did Laura organise this fab blog post today but she set me a challenge….to bake a rainbow cake! Twelve-year-old Scarlett is the star and victim of her mum’s popular blog – the butt of school jokes, she’s eager to stay firmly out of the spotlight. But one evening, she finds a gorgeous kitchen in the house next door, left empty by an elderly neighbour in hospital. As Scarlett bakes, she starts to transform her life, discovering new friends and forming the Secret Cooking Club. But can she fix her family, seal her friendships and find the mysterious secret ingredient?

So last weekend I recruited by hubby and my son into the kitchen and we had a great time making this rainbow cake! I know right?! I can’t believe we made this either!  It was so much fun!

We followed this receipe here over on kerrycooks.com ( @kerrycooksblog ) for the sponges and made our own butter cream topping.

Using Kerry’s step by step receipe made this really easy to use and the cake tasted delicious!

Anyway here’s a little video of us making it!

The Secret’s Out! – cooking is for everyone

At the end of August, the new series of The Great British Bake-off will kick off, bringing to the fore a new group of talented and hopeful bakers. Unlike shows that involve celebrities (chefs or non-chefs), I think much of the appeal of GBBO comes from the fact that the contestants are ordinary people – people like you and me – emerging from their ordinary kitchens, and doing something extraordinary.

I’m not a good cook – I don’t pretend to be, and I don’t harbor a secret urge to become one. All of my ‘free time’ is spent writing, and while I try to make healthy meals for my kids, I’m not a very good role model in that regard. I do, however, like to bake. I love decorating birthday cakes for my girls, and I like baking pies, Christmas cookies and gingerbread houses. I use simple recipes, and am not particularly experimental – but that’s okay, right – as long as it works! I sometimes let my girls help out, but to be honest, I’m not very patient at tolerating the inevitable mess.

The Secret Cooking Club is a book about friends, family, improving relationships, and, of course, good food! Despite my own inadequacies in the kitchen, I knew I wanted my main character, Scarlett, to form a secret club involving cooking and baking. Cooking is an activity that can bridge the gap between the generations, and is something that everyone can learn.

While my original draft centered on the activities of a group of girls, I quickly expanded the cast to include, among others, a boy member of the club. I am very much in favour of the modern push to teach about cooking and healthy eating in schools to all children. The days when women cook and men go off to work is SO long past. Also, cooking can be a great creative outlet. I personally know of a great many men who love to cook (alas, not my partner!). And just look at how many men are on GBBO and do amazingly well!

In addition to a boy, the club also includes an elderly neighbor who becomes the mentor of the girls and their cooking. One of the important elements of ‘middle grade’ literature is about children forging their own identity, and taking the first independent steps to become teenagers and young adults. For many books in this age group, adults are dead, absent, or otherwise someone to ‘get out of the way’ so that adventures may be had (and mischief can be made!).

As a writer, I am interested in exploring ways to bridge the gap between children and adults through understanding, and compromise on both sides. I became a first-time mum in my late 30s, and became much more attuned to how different things are for kids these days than when I was growing up. Mobile phones, the internet, Disney films on-demand – countless things that make life both better and worse. While my daughters aren’t teenagers yet, I realized that I was going to have to adapt to their world in order to relate to them.

In The Secret Cooking Club, the girls learn compassion by helping with the plight of their neighbor, and in return, her influence helps Scarlett improve her relationship with her mum and other adults. There is so much that older people and younger people can learn from each other – I hope that this book helps to plant the seed that it really is possible and worthwhile to make the effort.

Most of all, I hope that young readers enjoy reading my book, and that it inspires them to believe in themselves and try something extraordinary – whether it involves cooking, baking or something else that they love.

Good luck to all the contestants on this year’s GBBO, and I look forward to seeing your amazing creations! Maybe I’ll even take a risk and try to make something myself . . . ! 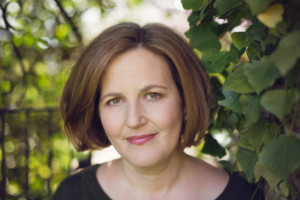 Laurel Remington is a writer of children’s, teen, and women’s fiction. Originally from Eureka, California, she now lives with her family in Surrey, and is Deputy General Counsel for a renewable energy company.

Her debut novel, The Secret Cooking Club, was the winner of the Times/Chicken House Children’s Fiction Competition 2015. The novel was inspired by her three young daughters, who love to cook (and eat!) anything sweet.  When she’s not cleaning up the kitchen after them, she can usually be found working on her next novel.

You can find out more about Laurel on her website – www.laurelremington.com

A huge huge thank you to Laurel for such a brilliant post and to Laura at Chicken House for organising!

Have you read The Secret Cooking Club?  What did you think?  Are you intrigued?  Will you gve the Rainbow Cake a try?  What else do you like to bake?  I would love to hear from you!  Why not leave a comment using the reply button at the top of this review or tweet me on twitter using @chelleytoy!