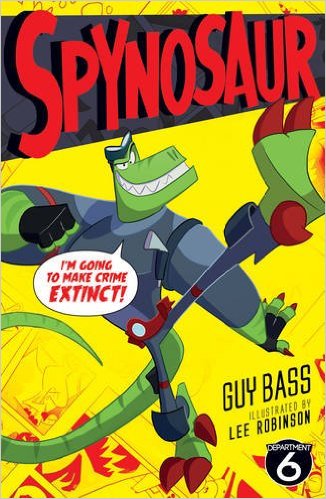 I am super excited to have been asked to be part of the #SpynoTour, for this brilliant new MG fiction book Spynosaur by Guy Bass and illustrated brilliantly by Lee Robinson.

Spynosaur was released on the 8th September 2016 published by Stripes and is set to be a spy-tastic super fun read.

A huge thank you to Charlie at Stripes for having me on the tour and sending me and Corey a copy of the book to read.

Look at for this book to feature on Septembers #Read-Toy-Gether!

For my stop on the blog tour I have a brilliant and hilarious guest post from Guy Bass where he is letting us into some secrets with A Secret Agent’s Guide to School ……. 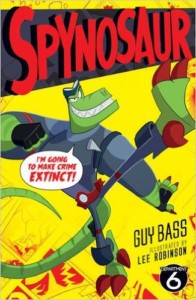 A new hilarious series from best-selling author Guy Bass, perfect for fans of My Brother is a Superhero, The Astounding Broccoli Boy and Astrosaurs.

SPYNOSAUR is secret agency Department 6’s not-so secret weapon. Created by mysterious science rays, Spynosaur has the mind of a super spy and the body of a dinosaur. Dedicated to protecting the world from criminal masterminds, this prehistoric powerhouse dishes out justice and puns to a host of eccentric enemies. But when he and his sidekick daughter Amber are sent to rescue a captured fellow agent, Spynosaur becomes embroiled in a plot to frame him. Can he and Amber clear his name in time to save the world?

Check out the awesome book trailer with super catchy song!

A Secret Agent’s Guide to School

Spynosaur may be a super secret agent dinosaur but his sidekick daughter, Amber, is an all-too human ten year old. So when Amber is on a mission, diminutive master of disguise Sergei acts as Amber’s decoy. He even goes to school in her place! But how does a sixty-two-year-old semi-retired spy with a permanent five O’clock shadow and an accent as thick as wet cement manage to convince teachers and pupils that he’s really Amber Gambit? Here’s Sergei’s secret agent guide to fooling a school…

Sergei is one-point-three metres tall. This is same size as child. So, with wig and school uniform, Physical Disguise is complete, but Mental Disguise is different matter. Child does not have brain like Sergei has brain. All child thinks about is funny business, like running up and down and making face and having giggles. To help Sergei think like child, Sergei pretends life is not relentless, gruelling struggle for survival, and tries to smile at least once a year.

Teacher is stupid. He does not teach proper lessons, like how to disarm bomb or how to hot-wire helicopter or best way to deal with charging grizzly bear. He wastes all time on why is sea wet and how big is moon and what is soil and something called “phonics”. Sergei cannot point out that teacher is stupid and teaches stupid things because Sergei is supposed to be child. But Sergei thinks children also know that teacher is wasting time. Children want to know how to hot-wire helicopter.

Modern child is not like child from past. Modern child has many games, which they play in tarmac arena called “the playing ground”. When Sergei was at spy school, we played games like Standing Sill in Snow for One Hour. Today children play Chase-for-No-Reason and Hopping-Scotch and “Pokémon Get”. So Sergei does not arouse suspicion, Sergei must keep up to the date on pointless modern games and pretend they are as much fun as Avoid Tripwire or Die.

The Lunch is favourite hour of school day for children. It is even better than time in playing ground, because there is pizza. On Fridays, children squeal like mouse because they can eat crumbed fish and chip. Sergei would give right eye (which is cybernetic) for real food like Grandmother used to make. Where is pickled face of goat or air-dried rodent or boiled pig’s heart in salt jelly? Sergei must use mastery of disguise to convince fellow pupils Sergei can stomach apple pie pudding, when all Sergei can think about is a bowl of delicious soured bull fat.

Guy Bass grew up dreaming of being a superhero – he even had a Spider-Man costume. The costume doesn’t fit any more, so Guy now contents himself with writing. He has also written the Dinkin Dings and The Legend of Frog series for Stripes. In 2010, Dinkin Dings and the Frightening Things won a CBBC Blue Peter Book Award in the “Most Fun Story with Pictures” category. Guy lives in London with his wife.

You can find out more about Guy and his books over on his website – http://www.guybass.com/ 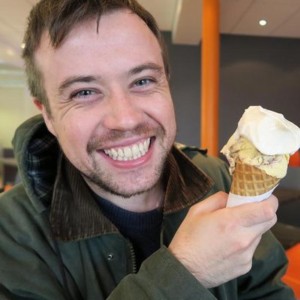 Lee Robinson is a comic book artist and illustrator living and working in the North East of England.

Why not catch up of follow the rest of this hilarious blog tour at the following stops!

A huge huge thank you to Guy and to Charlie for organising and having me on this fab blog tour and for such a fab post!

Have you read Spynosaur?  What did you think?  Are you intrigued?   I would love to hear from you!  Why not leave a comment using the reply button at the top of this review or tweet me on twitter using @chelleytoy!