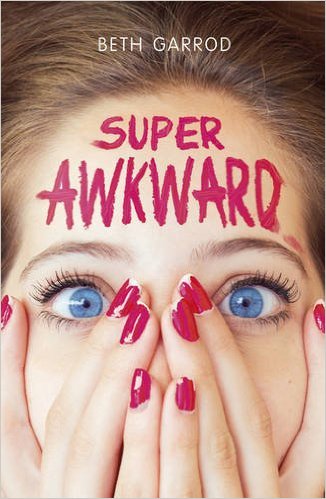 I am super excited to have been asked to be part of the blog tour for this super funny and super brilliant YA contemporary Super Awkward by the super awesome Beth Garrod.

Super Awkward was released on the 1st September 2016 published by Scholastic and is Beth’s debut and it made me laugh on every single page!

A huge thank you to Olivia at Scholastic for asking me to be part of the tour and sending me a copy of this wonderful book.

When Olivia asked me for a topic for Beth to write about for my stop on the blog tour I thought it would be perfect to get to know the main character of Super Awkward a little better with top ten facts about the one and only Bella Fisher…. 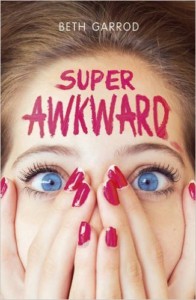 I, Bella Fisher, am absolutely WINNING at FAILING at life. 1. I once got my tongue stuck to a box of Calippos in a supermarket. 2. I accidentally called my geography teacher Mum. Twice. He wasn’t impressed. 3. I’m a geek. And not in a geek-chic kind of way, but in a secretly-caring-about-failing-maths-and-science way. 4. I always fail maths and science. So it figures that when I meet the FITTEST BOY IN THE WORLD, Zac, I’m doing solo star jumps. While dressed as a cereal box. *(NOTE TO SELF, fancy dress = HE-WILL-NEVER-EVER-FANCY-ME dress.) Now I’ve got to somehow persuade Zac to come to prom with me while avoiding my evil ex and dealing with a secret so mega-awks I want to Ctrl-Z my brain… What could go wrong? Oh yeah, that’s right. Absolutely everything.

Hello! Thanks for asking me to write ten things about Bella Fisher, the main character in Super Awkward. Or, if you’re anyone other than Chelley, thanks for reading it. Not that you’ve actually read it yet. (But if you do, then hang on to this thanks for later).

So, who is Bella? Bella Fisher is the lead character in Super Awkward. She’s 15, loves her two best mates and her dog Mumbles, and dreams of the day she doesn’t do something so mortifyingly embarrassing, she contemplates spending the rest of her days living in a wardrobe.

HOLD UP. That’s five things already. So let me get stuck into the actual list bit before I run out of things to say and start making stuff up, like she’s got a squirrel allergy (she doesn’t) (although it would be quite hard to know, as not many have stroked a squirrel, so let’s leave this one as a maybe).

1)Bella’s best mates, Tegan and Rach, are basically #lifegoals. Tegan is wiser than Google search, and can do the actual splits (she’s a competitive gymnast). Rach is the funniest human to be invented, and looks like a Disney princess IRL (but has no clue and just trips over all the boys falling at her feet). All Bella can do is lick her elbow (well she can’t, but she enjoys watching everyone try when she says she can).

2) Bella is obsessed with a boy who plays football near her house – MIAGTM (Man I Am Going To Marry). So, despite wondering if she’s sometimes too lazy to even walk to the loo, she is forever walking Mumbles round any locations she might spot him at. This would be an excellent plan if Mumbles main interest wasn’t sniffing people’s pant regions.

3 ) Bella loves crisps. Technically they are potato, so she figures they’re one of her five-a-day. Sometimes five of her five-a-day. However, eating crisps = that weird finger glue that sticks to ever surface (especially when Wotsits are involved). Which is maybe why she’s even more prone to typing the wrong thing on her phone, to the wrong person. Or sending an accidental under-chin-selfie to the world.

4) Bella once accidentally put an accidental under-chin selfie on the internet. It wasn’t even the less-bad side of her chin.

5) Bella has the most over-achieving-sister ever – Jo. She even over achieves on having amazing clothes. Which Bella may sometimes borrow. Maybe without permission. However, this happens less frequently since Bella tried on her dress with these weird crossover straps, that resulted in Bella being stuck with her hands over her head for over 90 minutes, as her sister refused to help and went to watch University Challenge.

6) Bella procrastinates. All the time. If there’s homework to be done, she’ll tidy her nail varnishes instead. If her mum’s nagging her to tidy her room, she’d suddenly find a way of doing her homework instead. It makes no sense – something Bella often thinks about, as a way of procrastinating from doing anything at all.

7) Bella thinks one word is often better than two. So putting words together is one of her favourite hobbies. Fobbies.

8) Bella wonders if her face might be made of some kind of first ever skin-velcro, as whenever there is a fit boy around she spends at least 50% of the time worrying she has something dangling off her eyebrow, or a green teeth morsel waving hello. 90% of the time she later discovers she was absolutely right.

9) Bella lives in the kind of village where meeting boys is hard (except ones like her sort-of ex boyf, Luke, who marks every encounter by yelling ‘WHO CAN SMELL FISHY BALLS?’ – his nickname for her). So when she’s dragged on a holiday/hell-iday with her mum and sister, it figures that when she does run into someone who looks like a walking album-cover, she’s on her own, doing star jumps, dressed as a cereal box (fancy dress = he will never, ever fancy me dress).

10) Nothing Bella ever says, or does, ever seems to go to plan. So much so, that she’s contemplating making ‘make sure nothing ever goes to plan’ her plan, just to see what happens.

So – that’s ten things about Bella. But ten things isn’t anywhere near the amount of disasters that would happen to Bella in a single day. So if you want to know more, Super Awkward should be able to fill you in. Or if you can’t be quite that bothered, you can just tweet me instead and we can talk about eating Chomps, and the ways you can try and style it out when someone accidentally spits on your face. 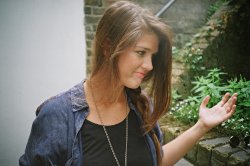 Beth is the debut author of Super Awkward.  She does pro-social stuff at MTV, look at dogs and listens to Shine albums.

Why not follow or catch up on the rest of this Super Awkward blog tour at the following stops!

A huge huge thank you to the lovely Beth for such a fab post and to Olivia for organising and having me on this fab blog tour!

Have you read Super Awkward?  What did you think?  What is your most super awkward moment?   I would love to hear from you!  Why not leave a comment using the reply button at the top of this review or tweet me on twitter using @chelleytoy!