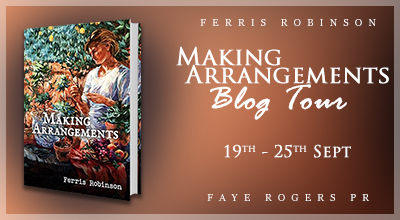 I was so excited to be asked via Faye Rogers to be part of the blog tour for a new Adult self published contemporary book released called Making Arrangements by Ferris Robinson.

So today I have a fab guest post from the author herself all about writing her debut! 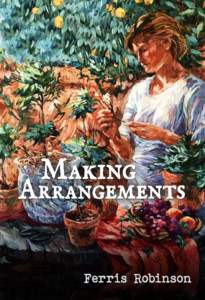 Against all odds, cancer survivor Lang Ellis is celebrating the one-year anniversary of her “death sentence” when her beloved husband drops dead on the tennis court.

Devoted to him, she reels from the loss, focusing on her precious granddaughter but struggling with her bossy only child, Teddy, and his aloof girlfriend, Sarah.

With her historical family estate in jeopardy, Lang realizes her husband wasn’t as perfect as she thought.

The secret he carried to his grave can ruin her life.

If she lets it.

“Making Arrangements” ended up being very different than it started out. The idea for my debut novel came from my sister. The mother of an old friend was dying in Tennessee, and my sister’s friend was in the thick of a work crisis in the film industry in California. The friend was beside herself, but my sister told her not to worry, that she would go sit by her mother’s side until she could get there.

This in itself was very touching to me. My sister and her friend were thousands of miles apart, and hadn’t kept up all that regularly. But the fact that they had been very close friends in high school, and had grown up together in a way, created a lasting bond. So my sister dropped everything and set up camp in the hospital where Mrs. Forte, who was active and had actually been on her way to the airport to fly to California when she fell ill, was suddenly and unexpectedly at death’s door. The theme of this friendship, which is more familial than not, and how it forms, is central to “Making Arrangements.”

My sister was not the only person in that hospital room. Mrs. Forte’s friend, octogenarian Mrs. Hailey, was also there. Lifelong friend of Mrs. Forte, Mrs. Hailey was by her friend’s side in her last days, as was another friend of Mrs. Forte’s daughter. These three women forged their own bond as they told stories about sneaking out of the house as teenagers, and crushing on boys and smoking cigarettes in the same high school’s restrooms – all the same stories but a generation apart.

In the days these three women were together, their lives were woven together with an intensity and depth that intrigued me. After Mrs. Forte died, these women continued their relationship, meeting for dinner and continuing their stories over wine. From the outside, the friendship between these three women seemed unlikely – they were decades apart in age and worlds apart in roles – but their bond was unmistakable.

Based on this event, the first draft of “Making Arrangements” had three protagonists and three different points of view. And it didn’t work. But I loved these characters and everything they had been through.

The hardest part of being a writer is killing the darlings. I hated to cut Camilla. The heavy-set dark-haired woman had survived her share of pain, and had done so without bitterness, but with humor and grace. Those two things, humor and grace in the face of horrific pain, are remarkable to me. And I witness it continually first hand. I know women who have survived the deaths of children – an unthinkable tragedy – and somehow they pull themselves up and carry on. And they don’t go through the motions of life grimly. They have a spark about them. A naughty wit. A joi de vivre, even though their hearts have been injured terribly.

This determination to carry on in a wreck of a life is remarkable to be. How do they decide not to curl up in a ball and wither away? Certainly they have reason. My main character, Lang Eldridge, begins her saga indeed curled up in a ball under the covers. And she heads back to her dark room repeatedly. But she is pulled back to the land of the living. And a friend is one of the things that pulls her back. This fictional friend is not one Lang would have necessarily chosen, but AJ Cole took it upon herself to help poor Lang. A grammar-butchering fashion plate with an ulterior motive, AJ Cole regularly reveals too much information to reticent Lang, but the friendship that evolved is, in effect, like family.

The final version of “Making Arrangements” is from Lang’s perspective, and more characters evolved than were in the first draft. A little mute stray dog is important to the story. I think dogs are old souls, and are the best of humanity in a sense. Dogs are loyal without a doubt, and see the best in their masters, no matter how badly we mess up our lives. They seem to sense when we are broken, and there is something about a dog posting itself by our sides and gazing steadily into our eyes that allow healing to begin. I feel strongly enough about this phenomenon to believe all my future novels will feature a dog as a primary character. And yes, I happen to have rescued a little mute stray dog that is very similar to the little dog in my novel – or did my little dog rescue me?

Another important character I added is Teddy, Lang’s son. He has an agenda, and is in a bad spot in his life. Developing his family’s historic property would solve everything, and despite his mother’s wishes, he tries to railroad her into selling it. He clearly loves his mother, but is stunted emotionally and unable to man up when she needs him.

Lang’s granddaughter, Katie D, is a bright spot who was not in the original version. My sister is a grandmother of four, and although I do not have grandchildren of my own, I see the joy and love and light they bring her.

And Sarah, Katie D’s mother, is another character inspired by my sister. My sister has a way of embracing and celebrating all that is good in a person (not unlike the way dogs see the best in us) and ignoring the rest. Regarding the women who have come into her family, she ignores any unbecoming quirks and shortcomings, and lifts them up and envelops them as her own. Lang is conflicted regarding Sarah, but as difficult as embracing her is, both physically and emotionally, she struggles to do so.

Although the characters and point of view changed, the theme of “Making Arrangements” remain the same. An unlikely friendship can be life changing, and as a rule, forgiveness is necessary to quality of life. And family is not necessarily defined by blood.

You can buy a copy of Making Arrangements here 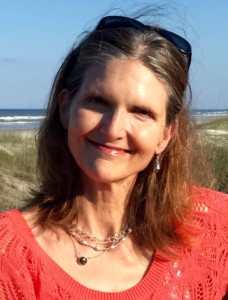 Ferris Robinson lives in a beautiful part of East Tennessee with her husband and two dogs. The mother of three grown sons, she delights in the fact that her dogs obey her – more or less.

A former columnist for the Chattanooga Free Press, she is the editor of the Lookout Mountain Mirror and the Signal Mountain Mirror. Her work has been published numerous times in The Christian Science Monitor and the “Chicken Soup for the Soul’ series. She is a columnist at chattanoogan.com.

The author of several cookbooks, including “Never Trust a Hungry Cook,” which she wrote in college and the “Gorgeless Gourmet’s Cookbook,” Ferris was featured on the cover of Women’s World magazine. Promoting her super-easy but healthy recipes, she made numerous television appearances and sold 10,000 copies of the Gorgeless Gourmet’s Cookbook, pre-Internet. Paid subscribers from every state in the U.S. received her newsletter featuring “practically fat-free recipes for super-busy people.”

Her book “Dogs and Love – Sixteen Stories of Fidelity” has 94 reviews on Amazon, and her other books include “Authentic Log Homes.” “Making Arrangements” is her first novel.

You can find out more about Ferris on her website: www.ferrisrobinson.com

What Danielle Did Next

Another huge thank you to Faye Rogers and Ferris for such a fab guest post!  Making Arrangements sounds fab!