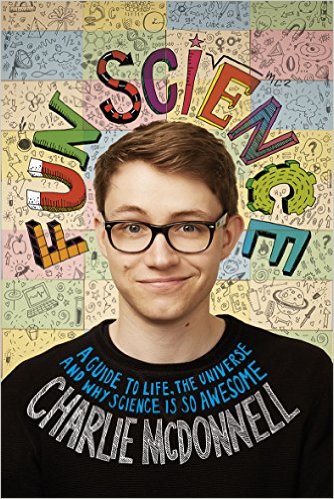 Charlie McDonnell is the first UK Youtuber to reach 1 million subscribers and his aim in writing Fun Science is to share his love of the subject, create new fans, and show that science is an integral part of everyday life, not just a subject you are forced to take at school.

Fun Science was released on the 20th October 2016 in hardback published by Quadrille Publishing and is pretty awesome. 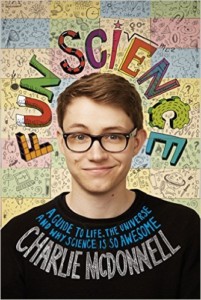 Welcome, fellow humans (and others), to the world of FUN SCIENCE! I’m Charlie, also known across the internet as charlieissocoollike.

In my book, I’ll be taking you on an awesome journey through the cosmos, beginning with the Big Bang through to the Solar System and the origins of life on Earth, all the way down to the particles that make up everything around us (including you and me!).

Expect frequent digressions, tons of illustrations of not-so-sciencey things (NB a microwave flying through space), and pages packed with my all time favourite mind-bending science facts.

So, get ready for a faster-than-the-speed of-light (OK, not quite) tour of all of the best and most interesting things that science has to offer us… and most importantly: WELCOME TO THE UNIVERSE!

(Written by a Science Fan NOT a scientist!)

Source – I was sent a copy of this book by the wonderful people at Midas PR. This does not affect my review or my opinions in any way and am delighted to write an honest review.  Thank you Midas PR for sending this to me to read and to Stephanie for organising!

I wasn’t really sure what to expect when I first saw this book.  I raise my hand up high and admit that I had not heard of Charlie prior to the book, but my 11 year old son had and sometimes watches his videos.

I found myself flicking through the pages, firstly to have a quick look and then becoming fully engrossed.

The book is split into ten sections ranging from The Universe to Life to The Brian and The End Of Time.  It is full of wonderful illustrations by Fran Meneses and Dave Brown and they bring Charlie’s words to life on the page.

The science is relayed with humour and in such a fun style that it really does make what your reading and learning seem fun.  The fact that clownfish can switch sex in order to breed is told with an aside about Nemo and his dad and geologists are dubbed Super Rock detectives (because geology  is cool!)

The book has fun facts and ultimate fun facts throughout and also includes some activities and mini experiments throughout.  Myself and my son had numerous fun trying an experiment involving our right leg and drawing a number six with our right arm!

Our minds were blown!

Charlie’s love for all things science shines brightly and he guides you through each section like he is excited to share things with you along the way.

It’s bright, it’s colourful, it’s full of facts and most of all it does what it says on the tin….it makes science fun!

This video chats a bit more about how Charlie write Fun Science…. 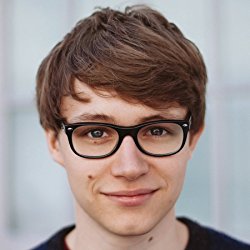 Charlie McDonnell (known on YouTube as charlieissocoollike) is a British Video Blogger, Filmmaker and Musician from Bath, who currently resides in London.

After starting to post YouTube videos in 2007, Charlie became the first Video Blogger in the UK to reach one million subscribers on YouTube. His most viewed video is of him doing a bad american accent (he’s not sure why that happened) and his second most viewed video is “Duet With Myself,” which he’s a bit more proud of, honestly.

In 2010 Charlie released his first album, “This Is Me.” People seem to really want him to make more music but he hasn’t gotten around to that yet. Throughout 2013-14, Charlie made a series of four short films, funded directly by YouTube. He likes to think they got better as he made more of them, but is happy for you to disagree with him on that.

Over the years, Charlie has worked on numerous projects for charities, including Cancer Research UK, UNICEF, Children In Need, Comic Relief, Save The Children and the Alzheimer’s Society. I guess he must like helping people or something.

Beyond his own YouTube channel, Charlie has worked on many online video projects, notably “Science of Attraction,” hosted by Derren Brown, and a series of video blogs from behind the scenes of Doctor Who for the BBC. He’s also worked with many brands to produce videos for his own channel, including Microsoft, Sony Pictures, Pixar, Disney, and Tommy Hilfiger.

Charlie is a regular participant in Radio 1’s Internet Takeover show (yes, for the actual radio) and he’s also tried his hand at voice acting for Mike Bithell’s upcoming video game “Volume.” He’s pretty new to both of these things, but fortunately hasn’t been told off for doing a bad job by his bosses. Yet.

In his spare time Charlie enjoys consuming media in all its forms, and hanging out with his girlfriend and their cat, Gideon. Basically, he is deceptively boring.

You can find out more about Charlie on his website – charliemcdonnell.com

A huge thank you to Stephanie at Midas PR for sending me a copy of this book!

Have you read Fun Science?  Does it sound up your street?  Do you have any fun science facts?  I would love to hear from you!  Why not leave a comment using the reply button at the top of the page or tweet me on twitter using @chelleytoy !