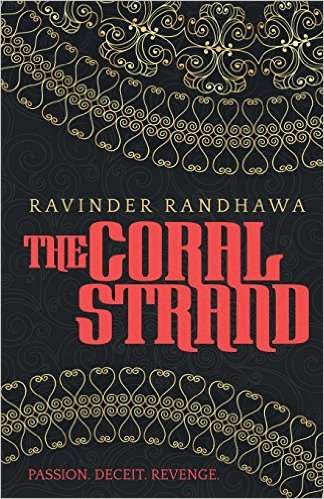 I am super excited to welcome the brilliant Ravinder Randhawa back to Tales today for another fab guest post this time celebrating her book, The Coral Strand which was released earlier this year published by Matador.

Today Ravinder discusses her favourite scenes in the book…. 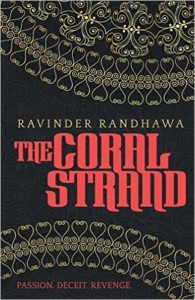 From English winters to Indian summers. From the cold streets of modern Britain to the glamorous, turbulent and impassioned world of 1940’s Mumbai.

Each year, Sita makes a mysterious journey to the Mausoleum, the place of dark memories and warped beginnings. She goes to spy on Emily and Champa, the strange ‘guardians’ she once escaped, and on whom she had taken a daring revenge. This year proves to be fatefully different… This year, the terrible secrets of the past are starting to emerge; secrets that inexorably link the three women to each other, to the grey-eyed stranger Kala, and to an altogether different world – the glittering, violent and passionate world of 1940’s Mumbai.

Ravinder Randhawa’s women, caught in a desperate fight for survival, cross taboos and forbidden lines in this richly plotted novel, imbued with fascinating historical detail, and the beauties of place and period. Readers of modern and historical novels alike will enjoy Randhawa’s evocative portrait of the compelling relationship between Britain and India, which continues to enthrall and engage us.

Favourite Scenes In The Coral Strand

I have so many favourite scenes in The Coral Strand, I’ll restrict myself to four, from the early part of the book. The Coral Strand is one of the few novels to present the dark side of empire and the Raj. We’re normally given a Raj that’s glamorous and pretty, with only a little bit of tyranny. But in my head, I can hear Emily saying, ‘first they established the empire over women, and then over countries.’ This sentence isn’t in the novel, but I can hear Emily saying it loud and clear. Emily instinctively understands what it’s all about and when faced with survival or destitution, has the guts to break one of the Empire’s taboos.

On to favourite scenes: my first one is actually the opening scene.

“Afraid? No fear. Not me.” This is how we meet Sita, one of the major characters, as she stares into a tiny mirror, and chants her daily mantra to herself. Sita’s determined to appear strong and independent, to stand on her own two feet, but every morning she needs to build up some Dutch courage.

When she takes a bottle of Old Spice, the male cologne, and sprinkles herself with it as if it’s the most fragrant of feminine perfumes, we begin to guess there may be contrariness and rebellion simmering in her character. The scene takes us back to her childhood and introduces us to the formidable and mysterious Emily, who will brook no defiance, and who first gives her a bottle of Old Spice. We also learn that Sita ran away from Emily’s house.

Opening the curtains, Sita rubs the condensation on the window, and a reflective, thoughtful Sita, looks out into the dark morning, noting the few windows which are lit, “early risers providing her with a distant sense of camaraderie.” I love the feeling this sentence gives, suggesting that Sita instinctively feels a kinship with other people, a connectedness. Echoing one of the major themes in the novel, about people being connected to each other, and the need to find out how and why.

My second favourite scene is where Sita assembles herself, item by item, garment by garment, make-up colour by make-up colour, copying the image in an Asian magazine. Because she doesn’t know how to dress for an Asian occasion, and has to engineer an imitation. For me, it carries echoes of how women, so often have to ‘construct’ themselves, ‘engineer’ themselves, for the outside world.

The third scene is set in Britain 1942, and is rather brutal, but brilliantly captures the steel in Emily’s character. Emily and Maureen are both being courted by Thomas Miller, who is visiting from India. In the end he chooses Emily. Rejected Maureen waits for Emily outside the factory gates “with murder in her eyes.” Maureen batters and beats her into the ground, till other women forcefully pull her away. “Spitting blood and grit, Emily tasted victory.”

The fourth scene is set in Bombay*1942. Thomas and Emily have just disembarked from their ship, and are checking into a boarding house. Unknown to Emily, Thomas has a secret lover in Bombay, a woman called Champa. Two of Champa’s acquaintances see Emily arriving with Thomas; discover she’s his new wife, and immediately set off to see Champa.

In Champa’s rooms, the women are formal and polite: “To fully milk the enjoyment of an event, suspense must be created, with hints and teases strewn along the path.” When they finally reveal the truth, one of the women, nick-named Telegram, gets completely carried away, wildly exaggerates the beauty of Emily’s looks, and extravagantly elevates her importance by hinting she may be linked to English nobility, perhaps Royalty itself.  “Emily was never to know how much she owed Telegram, for after her description of Emily, Champa never quite managed to shed the image and information she was first fed.” And thus, events are set in motion, which cross decades and carry them across the ocean to England.

You can buy a copy of The Coral Strand here 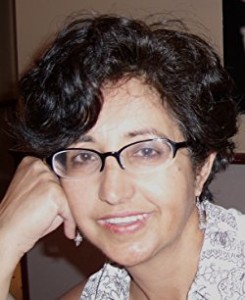 Ravinder was born in India, but grew up in the leafy county of Warwickshire, England, not far from Stratford-upon-Avon. She was incredibly lucky that her first trip to a theatre was to see ‘The Merchant of Venice’ by the Royal Shakespeare Company. An event that’s still luminous in her mind. Ravinder loves travelling, and socialising with friends and family. Tends to have opinions on many things, and tries to dig a bit deeper into them and discuss them in her monthly blog at: http://www.ravinderrandhawa.com/category/blog/

You can find out more about Ravinder on her website – www.ravinderrandhawa.com

A huge thank you to Ravinder for such a fab guest post and to Faye Rogers for organising.

I can’t wait to read The Coral Strand!

Have you read The Coral Strand?  What did you think?  Have you read of Ravinder’s other books?  Why not leave a comment using the reply button at the top of the page or tweet me on twitter using @chelleytoy !