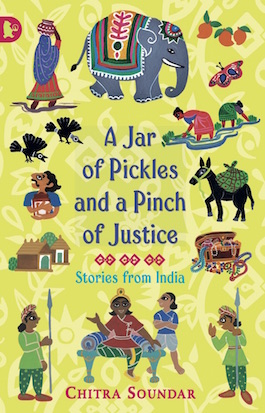 I am super excited to have been asked to host a brilliant guest post by Chitra Soundar author of A Jar Of Pickles And A Pinch Of Justice which was published by Walker as part of their Racing Reads in October 2016 and illustrated by Uma Krishnaswamy.

So sit back and relax and read all about this fab book….. 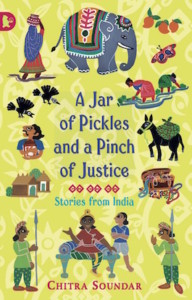 Prince Veera and his best friend, Suku, are left in charge of King Beema’s court when the king goes off on a hunting trip. Each day the king’s subjects come before the boys with their problems and petty disagreements. Can Veera and Suku settle the dispute between the man who sells a well – but not the water in it – to his neighbour? Or solve the mystery of the jewels that have turned into pickles? And what about the old washerwoman who is set the task of washing the king’s elephants until they turn white?

These clever, funny trickster tales, full of humour and colour, are sure to delight.

In the 1970s I grew up on a spicy menu of South Indian pickles, parables and proverbs. I gravitated towards the parables and folktales that were funny and engaging – rather than moral tales. When my grandmother told me these stories, she never once “highlighted” the moral of the story. She laughed a lot and we giggled together how Tenali Rama or Raja Birbal got out of their quandary or tricked their enemies. It was good fun.

But those stories stayed with me longer than any other I read or listened to. My conversations with my Gran used to be often punctuated by these parables – a kind of code.

For example there is a story called Tenali Rama and the Cat that illustrates the phrase – “Once Bitten Twice Shy.” But I don’t think I was ever explicitly told that. Every time I hesitated to do something – whether a food I hadn’t liked before or a hobby I wouldn’t pick up, I would be told, “Don’t be like the cat that drank hot milk.” Stories were and are life lessons.

These stories stuck with me. I read every one of them I could get my hands on, in prose form and in comic book form. 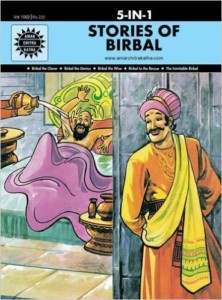 Like most storytellers, I think I remembered the core, the spine of the stories I listened to or read. These were tucked away in a corner in my memory.

So when I was asked by my editor at Walker Books to find stories that appeal to young readers, I decided I would bring these stories to today’s children, wherever in the world they are. But I didn’t want to tell them in the political context of the 16th century when these characters had lived. While keeping the feel of the bygone days, I wanted them to be closer to young readers.

So instead of just retelling them, I adapted them from the original essence of Birbal and Rama stories, which had themselves evolved, mutated and grown across India.

As many of the Birbal and Rama stories happened in king’s courts, I created a kingdom and Prince Veera, a prince who had the able advice of a good friend and co-conspirator Suku, who knows how the common man works. In India, the monarchs had a custom, to walk the streets dressed as a commoner so he could listen to the problems of the people. In these stories Prince Veera doesn’t have to go in disguise. He spends a lot of time with his best friend Suku and his family and in touch with the real world. 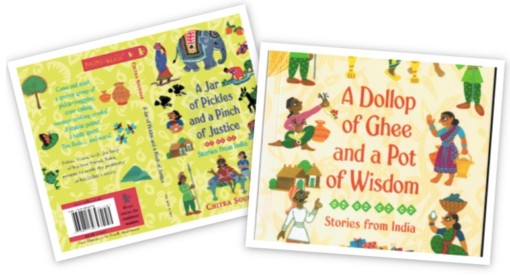 These stories are first and foremost full of friendship. The camaraderie between the prince and his friend are important to the stories too. The original heroes of these stories – Raja Birbal was a good friend of Emperor Akbar and the south Indian Tenali Rama was a favourite of King Raya.

Read these stories to a group of children and watch them argue and discuss. Hear them talk about fairness and deception. Get them to find the solution to the puzzle set in front of them. Talk about the ending, the solution to the puzzle – how Prince Veera or Suku solved it – did they go “Oh Yeah!!” – that’s the feeling I used to get when I read them as a kid – the feeling of inevitable but unexpected. And that’s the feeling I want to pass on to today’s readers.

So go on, read A Jar of Pickles and a Pinch of Justice and see if you go “Oh Yeah!” too!

A Jar of Pickles and a Pinch of Justice by Chitra Soundar (£5.99, Walker) 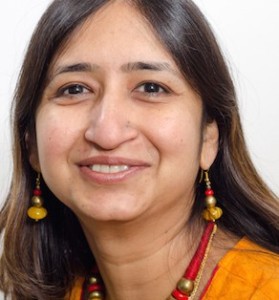 Chitra Soundar was born in Chennai, a coastal city in South India. She speaks Tamil at home and can also read, write and speak Hindi, the national language of India. Chitra fell in love with English, when she started the English Alphabets in kindergarten. She taught herself to read by looking at words and pictures, for hours together. She also loved listening to stories from her grandmother and grandmother’s sisters.

Chitra read non-fiction features and jokes from Reader’s Digest when she was ten. She is usually quiet amongst new people. But her friends know her as talkative and funny . Chitra makes friends easily and is always ready to help them. She won the Best Storytelling prize when she was seven. She loves being with young children and started storytelling to her cousins when she was eight or nine. She made up limericks and stories and acted in plays written and directed by her mother every year during summer vacation.

Along with friends, she also started a magazine for local residents, written and copied using carbon and charged 25 paise for each copy. She took to fund-raising and volunteer work while in school, following in her mother’s footsteps.

Chitra started  writing poetry in Tamil when she was 14. Encouraged by her teachers, she wrote about nature, love and her country. She went on to write in Hindi and English as well. During her years in Junior College, she wrote songs for puppet shows for her Economics projects and wrote for her school magazines. She won the Best Poetry Award in Junior College. During her first year as an under-graduate, Chitra entered an essay in Tamil, on the state of education in India. Her essay won the first prize in the all-state competition.

In 1999, she moved to Singapore, to work as a programmer in a bank. That was when she decided to go back to writing. Her first choice was writing for children and after ten years of learning the craft and the business, she is proud to have published over 20 titles and hopes to keep writing for a long time.

When all the writing and reading is done, she is a whiz in the kitchen, whipping up spicy, hot Indian vegetarian food. Currently she lives in London, where she works in a bank and writes children’s books in all the free time she can get.

She visits the SouthBank, Hyde Park to write and to get inspired. She also takes an active interest in the writing community of SCBWI.

Chitra now has two muses – her two darling nephews who spend at least a day a week with her.

You can find out more about Chitra on her website – www.chitrasoundar.com

A huge thank you to Laura on behalf of Walker books for organising this post and to Chitra for a fab guest post!

Have you read A Jar of Pickles and a Pinch of Justice?  What did you think?  Are you intrigued?   I would love to hear from you!  Why not leave a comment using the reply button at the top of this review or tweet me on twitter using @chelleytoy!