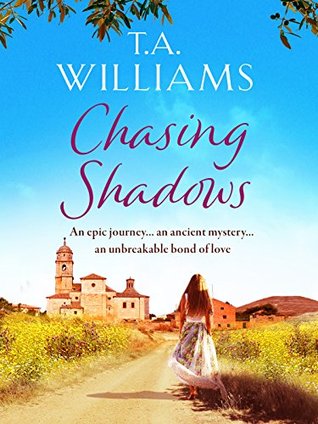 I am super happy to have been asked to feature a brilliant guest post from the wonderful T A Williams as part of this fab blog tour organised by PR Extraordinaire Faye Rogers.

Chasing Shadows was released on the 16th January on e book and is set to be a brilliant adult fiction romance novel with a blind protagonist at it’s heart.

I was really interested to hear about the research behind the novel….. 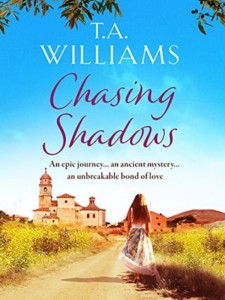 Amy had it all – money, brains and beauty. And then the accident happened.

The Present Day: Left blind and without her family, Amy feels she needs to get away. On a trip along the Camino, she is accompanied by the mysterious and troubled Luke. Having been set up to help Amy by a mutual friend, Luke finds he is also running from his past…

1314: A Templar Knight, Luc, is also running. He meets the wife of a former comrade, now blinded in a terrifying attack: Aimee. Taking her under his wing, they must journey together through a dangerous world.

As they travel through the stunning scenery of Northern Spain, this couple, so very like Luke and Amy, emerge from the shadows of time carrying a treasure of inestimable value.

The Research Behind Chasing Shadows

I certainly didn’t make it easy for myself when I decided to write a book….

1. Along a route of almost a thousand kilometres, crossing two mountain ranges and through countries speaking different languages.

2. With a blind person as my main protagonist.

The first part was probably the most straightforward. Along with a bunch of friends, I set off on my bike with two hefty panniers packed with clothes, camera and notebook, and cycled all the way along the pilgrims’ way to Compostela. Just like the characters in Chasing Shadows, this involved crossing first the Pyrenees and then the equally daunting Montes de Leon. We encountered headwinds in France, fierce heat in central Spain and damp, chilly weather in northwest Spain. My legs and lungs emerged stronger as a result and I came home with a notebook full of local colour, impressions and memories as well as a hundred photos of places along the way.

I speak pretty good French, but my Spanish is fairly rudimentary and my Basque non-existent and I was a little nervous before the trip about how well I would be able to communicate. I needn’t have worried. The Camino, as it’s known, is a real Tower of Babel with people from all over the world. I met walkers and cyclists from as far away as South America and Japan, as well as a load of Europeans, but the lingua franca everywhere was English. Not for the first time I thanked my lucky stars I have grown up with English as my native tongue.

So, as far as the nuts and bolts of a trip along the Camino were concerned, I managed to achieve pretty much all I needed that way. The next hurdle I had to cross was the whole blindness thing. I’m short-sighted and I wear glasses, but I have no experience of blindness apart from a close friend of the family when I was a kid. I knew I needed to research this more fully and I got some fantastic support from a local sight loss charity, Devon In Sight, and in particular their IT boffin, Darren, along with his lovely guide dog, Jet. From Darren I learned that my assumption that when you go blind your other senses improve to try to compensate for the loss is not correct. As he pointed out to me, his ears and nose remain the same size they were before he went blind five years ago, so it’s not that he hears and smells more acutely. Maybe, without the overwhelming sense of sight, he is able to concentrate more, but if the meat in the oven starts burning, he assured me Jet the dog is the only one with an olfactory advantage.

And, finally, the historical side of things. From that point of view, I am fortunate in that I developed a deep and lasting interest in the medieval period at least thirty years ago and I have read loads, and I mean loads, of books about that era. But, in writing a book, I didn’t just need to know the historical happenings at that time. I needed to find out what people ate, drank and wore way back then. However natural it may now appear to us to stop for a coffee, a bar of chocolate or even a portion of French fries, that just didn’t happen then. A banana or a Mars bar for energy were sorely lacking then, as was a nice warm, breathable waterproof jacket. A chunk of cheese, some dry sausage and a heavy oiled wool cloak were what the pilgrims used way back then.

I can’t claim that my research has been exhaustive, but I’ve really done my best to draw you a true and accurate picture of what it’s like now, and what it was like seven hundred years ago along the Camino. I hope you enjoy the picture I paint.

You can buy a copy of Chasing Shadows here

About T A Williams 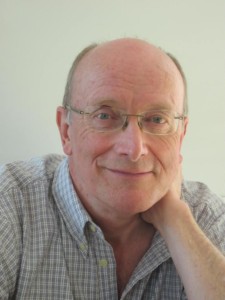 My name is Trevor Williams. I write under the androgynous name T A Williams because 65% of books are read by women. In my first book, “Dirty Minds” one of the (female) characters suggests the imbalance is due to the fact that men spend too much time getting drunk and watching football. I couldn’t possibly comment. Ask my wife…

My background, before taking up writing full time, was in teaching and I was principal of a big English language school for many years. This involved me in travelling all over the world and my love of foreign parts is easy to find in my books. I speak a few languages and my Italian wife and I still speak Italian together.

I’ve written all sorts: thrillers, historical novels, short stories and now I’m enjoying myself hugely writing humour and romance. My most recent books are the What happens… series. What happens in Tuscany reached #1 in the Amazon.uk Romantic Comedy chart and What Happens on the Beach, the last in the series, came out in July. Chasing Shadows is still romance, but with the added spice of a liberal helping of medieval history, one of my pet hobbies. I do a lot of cycling and I rode all the way to Santiago de Compostela on a bike a few years back. This provided both the inspiration and the background research for Chasing Shadows.

I’m originally from Exeter, and I’ve lived all over Europe, but now I live in a little village in sleepy Devon, tucked away down here in south west England. I love the place.

You can find out more about T A Williams on his website – www.tawilliamsbooks.com

You catch up or follow the rest of this fab blog tour at the following stops. Have you read Chasing Shadows?  Are you intrigued?  I would love to hear from you!  Why not leave a comment using the reply button at the top of this post or tweet me on twitter using @chelleytoy !