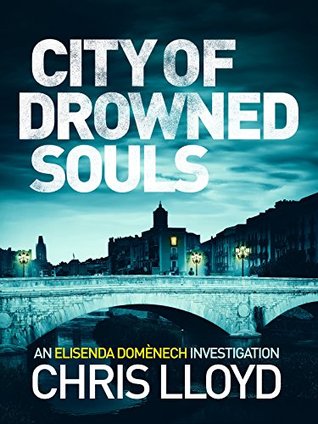 I’m really excited to have been asked to be part of this fab blog tour to celebrate the release of City Of Drowned Souls by Chris Lloyd.

City Of Drowned Souls is the third book in the Elisenda Domènech Investigation series and is due to be released on the 6th February 2017 published by Canelo.

This series is perfect for fans of crime thrillers who love Ian Rankin, Henning Mankell and Andrea Camilleri.

Today I have the wonderful author himself telling us his five favourite scenes in the series….. 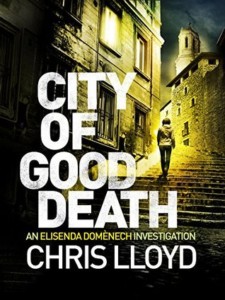 A killer is targeting hate figures in the Catalan city of Girona – a loan shark, a corrupt priest, four thugs who have blighted the streets of the old quarter – leaving clues about his next victim through mysterious effigies left hung on a statue. Each corpse is posed in a way whose meaning no one can fathom. Which is precisely the point the murderer is trying to make.

Elisenda Domènech, the solitary and haunted head of the city’s newly-formed Serious Crime Unit, is determined to do all she can to stop the attacks. She believes the attacker is drawing on the city’s legends to choose his targets, but her colleagues aren’t convinced and her investigation is blocked at every turn.

Battling against the increasing sympathy towards the killer displayed by the press, the public and even some of the police, she finds herself forced to question her own values. But when the attacks start to include less deserving victims, the pressure is suddenly on Elisenda to stop him. The question is: how? 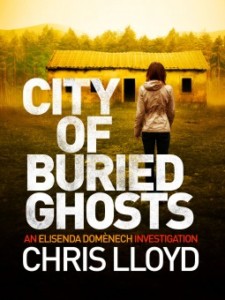 Be careful what you dig up…

Still recovering from the tragedy that hit her team, Elisenda takes on a new case. Except it’s not new. On an archaeological dig by the coast a body is uncovered, seemingly executed with a spike thrust through the base of the skull – an ancient tribal ritual. It soon becomes clear that this body is neither ancient nor modern, but a mysterious corpse from the 1980s.

Assigned to the case along with her team, Elisenda soon uncovers a complex world of star archaeologists, jealousy and missing persons. They find a dark trade in illicit antiquities, riddled with vicious professional rivalries. And even though she’s staying close to the crime scene, Elisenda is also never far from enemies of her own within the police force.

Just as the case seems to become clear it is blown wide-open by another horrific murder. Elisenda must fight her personal demons and office politics, whilst continuing to uncover plots and hatreds that were long buried. How far will she go to solve the crime? Is her place in the force secure? And can she rebuild her life? 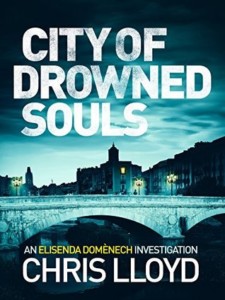 When a child disappears, the clock starts ticking

Detective Elisenda Domènech has had a tough few years. The loss of her daughter and a team member; the constant battles against colleagues and judges; the harrowing murder investigations… But it’s about to get much worse.

When the son of a controversial local politician goes missing at election time, Elisenda is put on the case. They simply must solve it. Only the team also have to deal with a spate of horrifically violent break-ins. People are being brutalised in their own homes and the public demands answers.

Could there be a connection? Why is nobody giving a straight answer? And where is Elisenda’s key informant, apparently vanished off the face of the earth? With the body count threatening to increase and her place in the force on the line, the waters are rising…

Be careful not to drown.

It’s really a lot harder than I thought trying to think of five favourite scenes as it’s impossible not to be critical as I revisit them, so I think I’m going to have name the scenes that I enjoyed writing the most.

1. I’ve made matters even harder for myself by choosing one of the scenes towards the end of City of Good Death. It’s a dénouement, so I’m going to have to say why I like it without giving anything away. The scene takes place amid the stones of a ruined tower outside Girona’s medieval city walls. The tower was destroyed in the fifteenth century at the time the city’s Jewish community was facing increasing persecution, and it partly reflects what’s been happening in the story. The actual setting is extraordinarily tranquil, removed from the noise of traffic and people even though it’s only just on the edge of the old town. That tranquillity made it the ideal location for a dénouement that carries a menace and an act of violence that is so out of place with its surroundings, but so fitting given the nature of the story.

2. Elisenda has an informant called Siset, who’s a petty criminal and a bit of a hopeless case. He isn’t at all a pleasant character and Elisenda tolerates him rather than likes him, even though she does generally tend to side with the people who’ve lost their way in life. Rather like actors relishing playing the baddie, I have great fun writing about Siset and I always enjoy creating the scenes between the two of them as they’re often a respite from the intensity of the investigations. He’s a scrawny little figure with a perpetually runny nose and faded T-shirts that he’s forever tucking into his trousers, and he alternates between whiny and ineffectually aggressive. The first time we meet him, Elisenda’s eating lunch in a fairly sleazy café and asking him for information. He’s uncomfortable at being seen with a police officer, and Elisenda uses that to try and cajole him into telling her what he knows. Her enjoyment of the surprisingly good food is in stark contrast to Siset’s increasingly desperate attempts for her to let him go.

3. In City of Buried Ghosts, Elisenda’s investigation brings her into contact with feuding archaeologists from a present-day dig and an excavation from the 1980s. Looking for answers, she visits the leader of today’s excavations at the site of an Iberian village. The setting is real and stands on the top of a hill overlooking a plain to the Mediterranean –writing about it took me back to the warmth and the wonderful views. It’s also an important scene as the archaeologist takes Elisenda into the museum and shows her two of the ancient skulls that have been discovered there, each one with an iron spike embedded in them, most probably a ritual killing. It’s key because the investigation began when a body dating from the 1980s was found with the same fate. The skulls are actually on display in the museum and were the original seed of the story – it’s always interesting to be able to bring the real inspiration into a tale and blend them into the action.

4. Elisenda is a rocker. She’s a big fan of Catalan rock bands and often uses music to enhance or change her mood. She also finds that the switches in rhythm and pace help her think and send her thoughts off in other directions as she’s working on an investigation. In City of Drowned Souls, she’s attempting to lay a trap for some very violent thieves. Although she has back-up, she feels alone and vulnerable in an isolated house on the seashore. The house belongs to her sister, but Elisenda can’t stand her taste in music, so she puts her own player into the dock and engulfs the house in loud and forceful music by her favourite band. The energy of the music pumps Elisenda up to prepare her for a possible attack. I found that when I was writing it, having played the music Elisenda was listening to, the scene developed quickly and energetically and it ended up being very different and more action-packed than I’d meant it to be.

5. In City of Drowned Souls, Elisenda is forced by her boss, Inspector Puigventós, to undergo counselling as he claims that her grief for her daughter is affecting her work. She goes very reluctantly, as he will only allow her back into the police station once she’s had a number of sessions with the counsellor; Elisenda being Elisenda, she is very resistant at first. Every day in the story begins with her session, and I enjoyed writing the cat-and-mouse relationship she has with the counsellor, Doctora Puyals. Always a private character, Elisenda tries to give little away but Puyals proves to be her equal. The scenes developed as I wrote them, as did the dynamic between the two women, and I was surprised at how they challenged each other. One of the most enjoyable aspects was discovering how the counsellor was able to use Elisenda’s own tactics for dealing with recalcitrant villains to make her open up and begin on the journey to healing herself. Despite Elisenda’s best efforts to confound her. 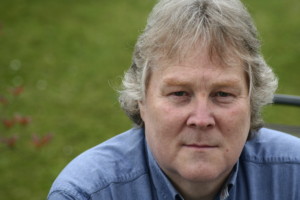 Chris was born in an ambulance racing through a town he’s only returned to once and that’s probably what did it. Soon after that, when he was about two months old, he moved with his family to West Africa, which pretty much sealed his expectation that life was one big exotic setting. He later studied Spanish and French at university, and straight after graduating, he hopped on a bus from Cardiff to Catalonia where he stayed for the next twenty-four years, falling in love with the people, the country, the language and Barcelona Football Club, probably in that order. Besides Catalonia, he’s also lived in Grenoble, the Basque Country and Madrid, teaching English, travel writing for Rough Guides and translating. He now lives in South Wales, where he works as a writer and a Catalan and Spanish translator, returning to Catalonia as often as he can.

He writes the Elisenda Domènech series, featuring a police officer with the newly-devolved Catalan police force in the beautiful city of Girona. The third book in the series, City of Drowned Souls is published on 6 February 2017.

You can find out more about Chris on his website – www.cityofgooddeath.com 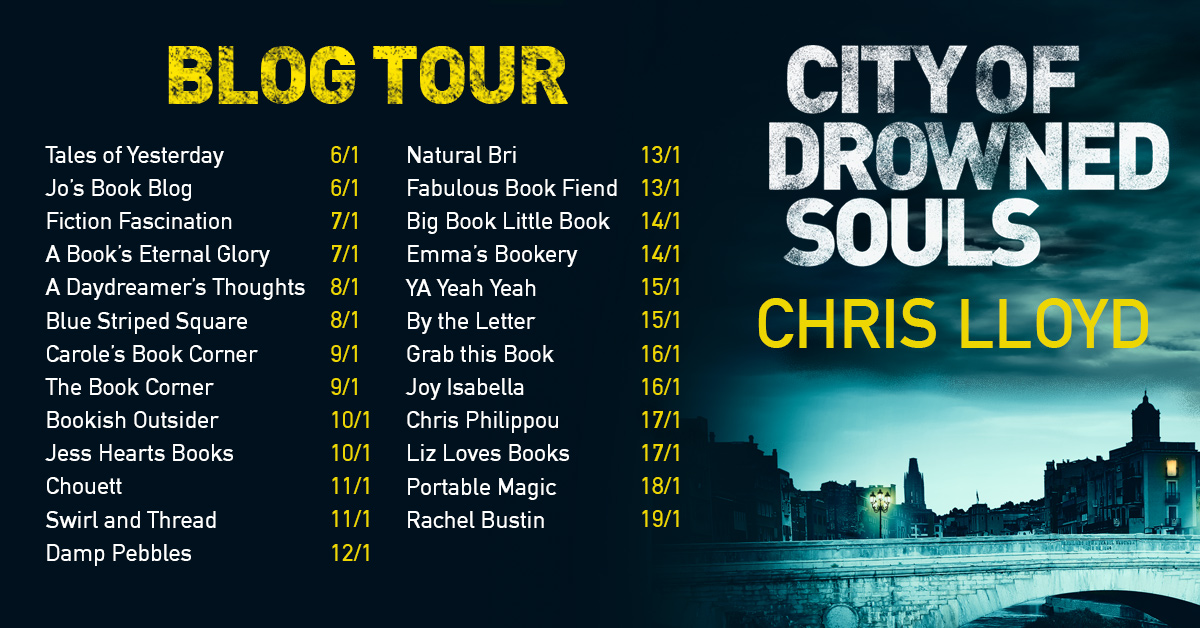 Have you read any of the Elisenda Domènech Investigations Series?  Are you intrigued?  I would love to hear from you!  Why not leave a comment using the reply button at the top of this post or tweet me on twitter using @chelleytoy !