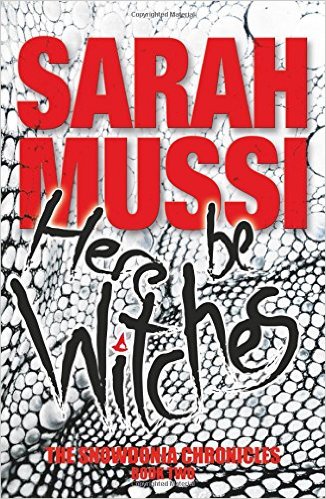 Today I am so so happy  to be part of the blog tour for Here Be Witches by the lovely Sarah Mussi!

Here Be Witches was released on the 1st March 2017 published by Shrine Bell and is book two in Sarah’s Snowdonia Chronicles series!  I cannot wait to delve into this adventure as soon as possible! 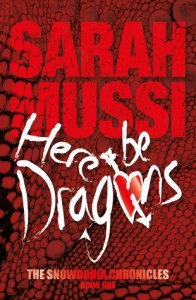 Find out more about the first in the series, Here Be Dragons in this previous guest post here

Today Sarah interviews herself in the form of a brilliant guest post and discusses exactly how to write a sequel……. 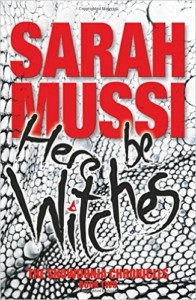 Here Be Witches is the second book in the Snowdonia Chronicles trilogy by Sarah Mussi. A perilous adventure into the magical and murderous realm of mythical Snowdonia.

All Ellie Morgan wants is to be with her one true love, Henry. But she’s caught in the middle of a BATTLE as old as SNOWDON itself. A battle between GOOD and EVIL.

A WITCHES’ SPELL, cast high on the mountain, has sped up time and made matters MUCH WORSE. The dragons are awake; mythical creatures and evil ghosts have risen. And nearly all of them want Ellie DEAD.

Thank heavens for loyal friend George, (disloyal) bestie Rhi, and mysterious stranger, Davey. Armed with Granny Jones’s potions, Ellie and her companions must set out on a journey to REVERSE THE SPELL, stop the EVIL White Dragon and find Henry.

As an eternal winter tightens its grip on Snowdon, Ellie and her friends have just THREE DAYS to SURVIVE and complete their quest.

I’m totally thrilled to be with Tales of Yesterday on day two of my blog tour for book two in The Snowdonia Chronicles: Here be Witches

THANK YOU SO MUCH Tales of Yesterday!

During my blog tour I will be interviewing myself on HOW TO WRITE A SEQUEL!

Sarah interviews Sarah on how to write a sequel in a thrilling and compelling romantic fantasy!

Welcome to the world of WRITING A SEQUEL.

I am using Here be Witches to explain my thinking on how I did it.

OK.  Great. I shall be asking you lots of questions … now where did we get to?

We got to the narrative equation and writing a synopsis.

Ah! I remember you were going to share the synopsis of Here be Witches, can you do that now?

Well, a synopsis can go on for a bit longer than you might want to post here, and a synopsis for a sequel might have to contain vital exposition from book one … so I’ll just put the beginning of the synopsis for Here be Witches in this blog. The beginning is always the most important bit anyway, as it sets the scene, identifies the genre and whets the appetite (hopefully) for more. So here goes …

Ellie’s heart is broken and there is only one person who can mend it: Henry Pendragon, royal heir and Y Ddraig Goch, Red Dragon of Wales. But Henry can’t help Ellie, for he is badly wounded and entombed under Mount Snowdon, held there by ancient magic along with Sir Oswald, his fiendish uncle, and White Dragon of Wessex.

Determined to free Henry, Ellie dedicates herself to the task. On the 29th February, an auspicious day in the calendar of dragons, she receives a distressed message from her bestie, Rhiannon, something terrible has happened at Henry’s cavern. Her heart misses a beat. As soon as possible, Ellie sets out for Dinas Emrys where Henry lies imprisoned.

On her arrival at the lair, Ellie discovers that her friend, and other members of a witches’ coven have performed a sinister ritual on the cliffs above the subterranean cavern, a ceremony designed to break the magic laid upon the dragons and awake them.

In horror Ellie hears how the ceremony went terribly wrong. The earth cracked wide, one of the girls slipped into the chasm and was impaled upon two shimmering crystals. With a sound like thunder, the mountain split open and from inside it arose a terrifying white dragon, alive, awake and very angry … 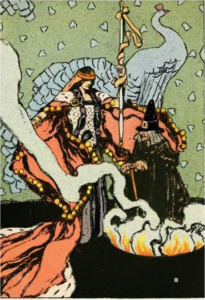 Yes, I see how each paragraph is a scene with some paragraphs acting as exposition too, but I can also see that because you have chosen to have Ellie as the narrator again, you have been unable or chosen not to have her see the witches’ ceremony first hand. Why was that?

OK, those are very perceptive questions, and I can’t answer them fully until we have established a few basics. Can I just go back to basics for a minute?

Right before we dive into the content and the problems of point of view and the delivery of ‘off stage’ scenes, I’d like to show you how I answered some fundamental narrative questions when planning Here be Witches. They involve looking at:

What exactly is a narrative?

What exactly is a plot?

What exactly is structure?

Why do you need to ask that?

It really helps with the planning. Here’s why…

In a narrative you need at least three things:

A character, a setting, some events (so in Here be Witches that breakdown runs like this: Ellie lives in Snowdonia and must overcome problems to achieve her goal).

In a plot we need at least three things

A character, a goal, a problem (so Ellie’s goal is to be with her true love Henry, but the magic, which has gone wrong, has banished Henry forever from the world).

For a structure we at least need three things

A beginning, middle, and an end (therefore Ellie must discover why Henry has been banished and then set out to find a way to reverse the magic and restore Henry to her and finally overcome those who wish to stop her).

Once you’ve got that in place then you can then decide about narration and point of view and ask yourself, if your lead character/protagonist is really the best person to tell this story and the one most affected by the action in general. If the answer is yes – you can then use additional devices to ‘show’ key ‘off stage’ scenes that are not within the remit of the protagonist’s point of view.

Only then can you really start to climb the narrative mountain and plan out a totally thrilling story: 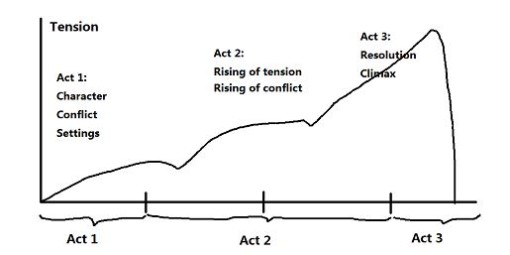 OK, but how did you decide Ellie WAS the best character to narrate this story?

Well despite the fact that she was the narrator in book one Here be Dragons and there might be readers who are already invested in her story, I had to establish that she was still the best character to continue to tell the story and to do this I had to revisit an important  principle – that it’s not what happens in a story, so much as who it happens to that is the most important aspect.  Readers live the story through the characters, so they need a really nice/reliable (usually)/interesting and convincing companion to see/live the events through.

But what makes an interesting, convincing character? 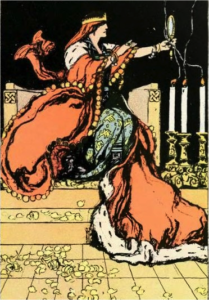 A main character should be heroic, and strong (perhaps)? Good-looking (controversial?) Independent? Kind?  I try to think of characters I admire in fiction I’ve read and ask myself why do I like them? Then add my answers into the mix when creating my characters.

I also like to choose a flaw that my protagonist will need to overcome. Flaws make us human and help readers to identify with the character and understand the decisions they make. (My flaw for Ellie is that she is loving out of her element, and it is bringing harm down on those others who love her and on her home.)

So a goal is important, as this is the engine of the story. I always choose the person who has the strongest/most interesting/most identifiable with goal to narrate my stories (forbidden love is a V strong goal and has driven many a better narrative than mine!). The character’s desire to achieve their goal drives the action forward, and when the character meets conflict they struggle to overcome it.

Note to self pinned on my wall: PROTAGONISTS MUST CONFRONT OVERWHELMING CONFLICT IN THEIR PURSUIT OF SOME VISIBLE GOAL.

This is so key because then the plot structure simply follows the sequence of events that lead the hero toward their goal, which mean all the hard work of plotting is done for me!

Thirdly, a character with a goal has motivation

Motivations make the character keep going when things get tough. Though sometimes it is the fear of what will happen if they fail and the stakes that drive them forward.

Finally, a character needs a background

Name/age and looks/ family/a place to live – all these things can help to make the story just right for the reader – as I choose a protagonist that might be very like the reader in some of these aspects to create reader identification.

After thinking about all of these points I decided that Ellie was still the main character and I was going to tell the story from her point of view.

So will you tell us then how you dealt with ‘off stage’ scenes and what devices you used to help the reader feel present at the action?

So stand by for tomorrow’s blog with tips and tricks for drip-feeding or even elbowing-in all the dreaded EXPOSITION and POV conundrums with Queen of Teen Fiction! http://www.queenofteenfiction.co.uk/ 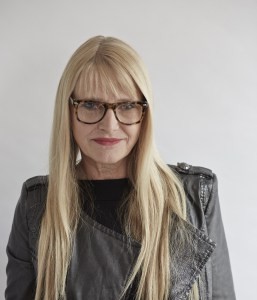 Sarah Mussi is an award-winning author of children’s and young adults’ fiction. Her first novel, The Door of No Return, won the Glen Dimplex Children’s Book Award and was shortlisted for the Branford Boase Award. Her second novel, The Last of the Warrior Kings, was shortlisted for the Lewisham Book Award, inspired a London Walk, and is used as a textbook in Lewisham schools. Her thriller, Siege, was nominated for the CILIP Carnegie Medal (2014) and won the BBUKYA award for contemporary YA fiction. Her thriller, Riot, was longlisted for The Amazing Book Award and shortlisted for The Lancashire Schools Award. Her most recent novel, Bomb, was published in 2015 by Hodder Children’s Books. Sarah was born and raised in the Cotswolds, attended Pate’s Grammar School for Girls, and graduated with a BA in Fine Art from Winchester School of Art and an MA from the Royal College of Art. She spent over fifteen years in West Africa as a teacher and now teaches English in Lewisham, where she is also the current Chair of CWISL (Children’s Writers and Illustrators in South London).

Find out more about Sarah on her website – www.sarahmussi.com

You can buy Sarah’s books here

A huge thank you to Sarah for a fab guest post and to Lorna at VP for organising and asking me to be part of this fab blog tour!

Have you read Here Be Witches?  What did you think?  Will you be picking up a copy?  I would love to hear from you!  Why not leave a comment using the reply button at the top of the page or tweet me on twitter using @chelleytoy !