I was contacted by the lovely Hannah from Lifelites about an Ultimate Library Raffle that they are currently running and I really wanted to share this with everyone.

Lifelites donate specialist technology to terminally ill and disabled children in hospices, and they are hoping to raise lots of funds through this wonderful raffle to help us continue their brilliant work.

Lifelites empowers 10,000 children and young people in hospices with life-limiting, life-threatening illnesses and disabling conditions by providing them with opportunities to benefit from the power of assistive and inclusive technologies to learn, to be creative, to communicate and to take control. There is a Lifelites project in every baby and children’s hospice across the British Isles. The hospices do not pay a penny towards their Lifelites project and all of Lifelites’ work is funded by donations: the equipment, ongoing technical support and training at each hospice costs around £50,000 over four years.

Here’s a little more about the charity and the raffle taken from the press release supplied by Lifelites…..

Charity Lifelites raffling the Ultimate Library of 100 signed books to raise money for children in hospices.

Lifelites – a unique charity which donates specialist technology packages for the 10,000 terminally ill and disabled children in every children’s hospice in the British Isles – is giving one lucky bookworm the chance to win The Ultimate Library of 100 signed books.

The prize, which is a once in a lifetime opportunity, will be given away as part of an online raffle hosted on givergy.com, and tickets will cost just £5 each.  That’s equivalent to just 5p per book, but to a book lover the prize will be priceless, as every single one is signed by the author or illustrator. Everyone who buys a ticket will also be helping to support the charity’s work in children’s hospices across the British Isles. 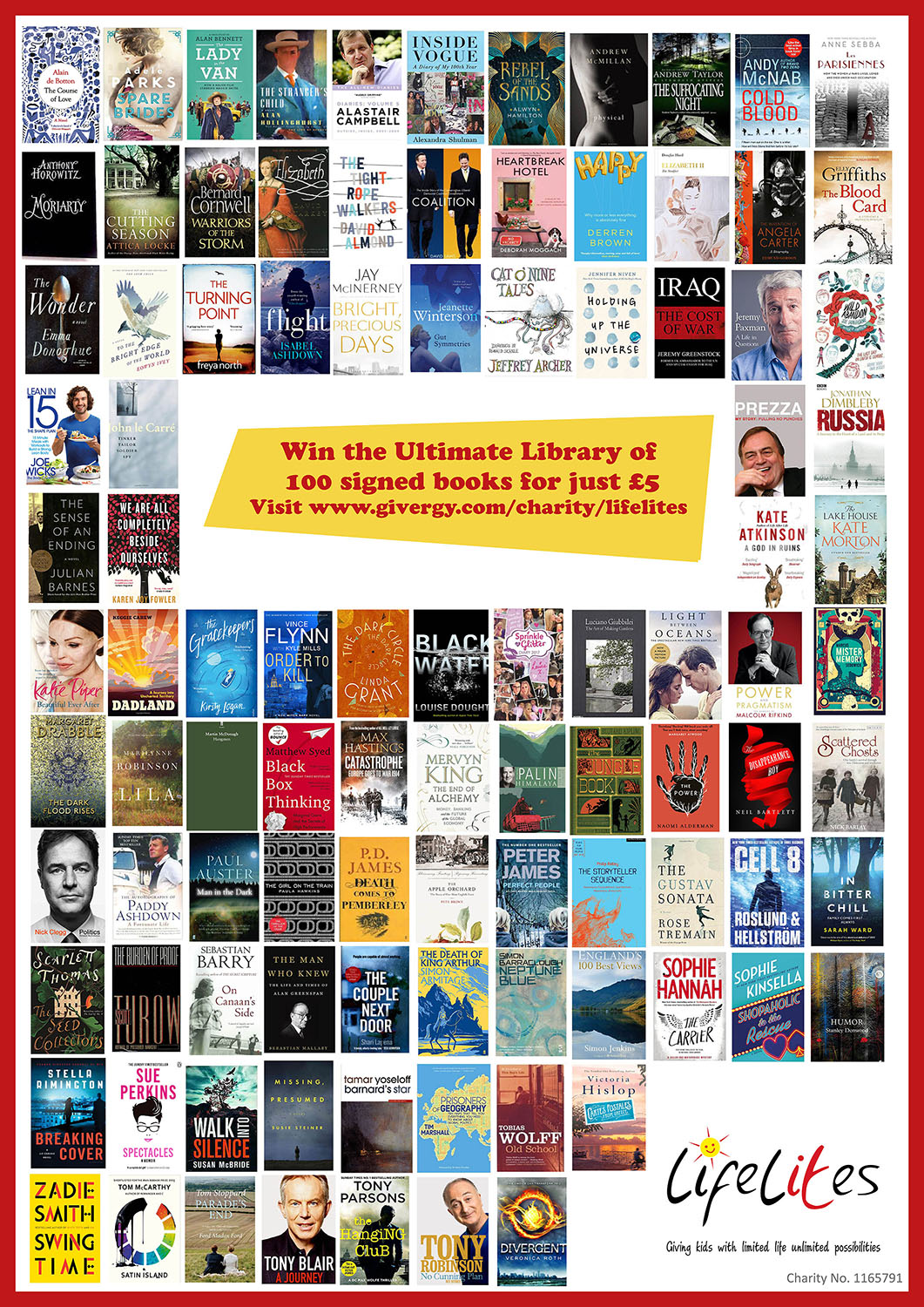 As well as the top prize of 100 signed books, there will also be a second prize. When finalised, the full list of books in each prize can be found on the Lifelites website:

Every penny raised will support Lifelites’ work to enhance the lives of terminally ill and disabled children in hospices through the power of technology. The charity donates and maintains cutting-edge, accessible equipment to give these children with limited lives unlimited possibilities. The equipment, staff training and ongoing support costs Lifelites over £1,000 a month per hospice but the charity donates this completely free of charge.

Fundraising and PR manager Dominic Hourd said: “Lifelites is so excited to be offering this prize. It’s a once in a lifetime opportunity. We are extremely grateful to every author who has kindly donated a signed book. Each one will help us raise money for all 10,000 terminally ill and disabled children in hospices across the British Isles.”

The raffle will begin on January 20th and run for three weeks and end on the 10th February 2017.

You can enter and donate here: http://www.lifelites.org/get-involved/enter-one-of-our-raffles/ultimate-library-of-100-signed-books

Please note – cost of delivery is not included. Lifelites will arrange this with the lucky winner. All books are currently at the Lifelites head office in central London. Shipping overseas is possible but will be extremely costly at the winner’s expense, so we do not advise this.

Please note that this raffle is being hosted via Lifelite and not through myself or TalesOfYesterday.co.uk

A huge thank you to Hannah for getting in touch with me about hosting a spotlight for such a good cause which I’m happy to support.

What would you do with 100 signed books?  I would love to hear from you!  Why not leave a comment using the reply button at the top of this review or tweet me on twitter using @chelleytoy!