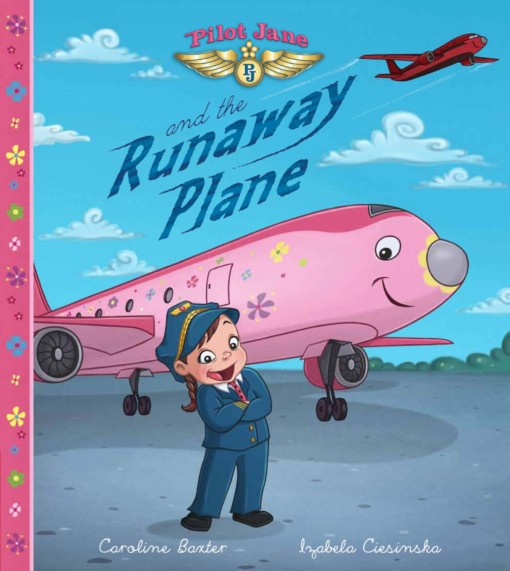 I’m super excited to have a fab guest post from Caroline Baxter to celebrate the release of Pilot Jane and the Runaway Plane.

Pilot Jane and the Runaway Plane was released on the 8th March 2017 published by Big Sunshine Books and is a brilliant picture book beautifully illustrated by Izabela Ciesinska.

Today for my stop on this fab blog tour I have a fab guest post from Caroline who is telling us about five women who have inspired her. 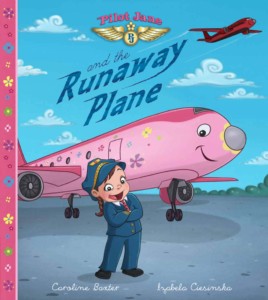 Join Pilot Jane, a fun and fearless airline captain, as she travels the world with her best friend Rose, a high-speed passenger jet. Together Jane and Rose have exciting adventures and form a perfect team, delivering their passengers safely to destinations as far afield as Alaska and Australia. But when disaster strikes and Rose falls ill, Jane is paired with ‘lean, mean flying machine’ Mighty Mitch. Can she still get the Queen to her party on time? Featuring a clever and courageous heroine, this action-packed rhyming story celebrates ‘Girl Power’ and shows what you can achieve if you work together. Fasten your seatbelt and get ready for take-off!

Five Women that Inspire Me

My new children’s picture book, Pilot Jane and the Runaway Plane week on International Women’s Day (8 March 2017). The story follows the adventures of Pilot Jane, a fun and fearless airline captain, as she travels the world with her best friend Rose, a high-speed passenger jet. But when disaster strikes and Rose falls ill, Jane is paired with “lean, mean flying machine” Mighty Mitch. Can they navigate the oncoming storm and get the Queen to her party on time?

In creating the character of Pilot Jane, I set out to build a picture of a highly skilled pilot who was both clever and courageous. So many children’s picture books feature a boy as the hero, I wanted to show a girl who was at the top of her game – who had ambitions and a sense of adventure! Not only is Jane an airline captain, she also surfs, practises tai chi and speaks Chinese. In fact, if picture books weren’t so short, her capabilities would have been boundless! Together Jane and Rose form a perfect ‘girl power’ team and this led me to thinking about some of the inspirational women we admire, read about and come across every day.

Picking just five is, of course, almost impossible, but the women below have all moved me personally for different reasons. Some are world-renowned for their impact and talents, others are lesser-known, but I hope you’ll agree that they are all inspirational in some way: 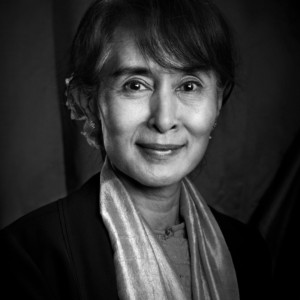 For many people, politician, activist and Nobel Peace Prize winner Aung San Suu Kyi is one of the most inspirational figures of the 21st century. She has dedicated much of her life to bringing democracy to Myanmar and endured years of hardship, hunger and imprisonment for her country. Finally, in November 2015, she led the National League for Democracy (NLD) to a majority win in Myanmar’s first openly contested election. When I was a member of staff at Oxford University in 2012, Aung San Suu Kyi – a former student – received an honorary doctorate and her speech that day was one of the most moving I have ever heard. Despite having spent more than two decades of her life under house arrest, she showed grace and dignity, rather than bitterness and resentment, commenting that the past “never goes away . . . But you can select what is best from the past to help you go forward to the future”. Aung San Suu Kyi shows us that, with enough courage, we can all be agents for change in the world and improve others’ lives for the better. 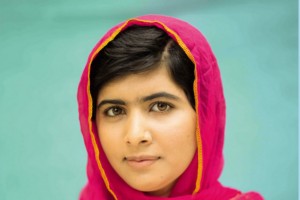 Internationally-renowned education activist Malala Yousafzai would undoubtedly make it on to many people’s list of ‘inspiring women’. While only a teenager, Malala drew the world’s attention to the issue of girls’ education, in particular the millions of girls being denied a formal education in Pakistan and other parts of the world for social, political and economic reasons. Despite being shot in the head by a Taliban gunman in 2012 for speaking out about the importance of education, her human rights advocacy for women and for education has continued and grown into an international movement. At the age of 17, she became the youngest person to receive the Nobel Peace Prize. Malala is inspiring for so many reasons: her incredible courage in standing up to the Taliban; the wisdom and compassion she shows despite her youth, and her ongoing determination to fight for the right for all children to go to school. Like Aung San Suu Kyi, she is an example of how one person can have an extraordinary impact on the world by standing up for what they believe in. 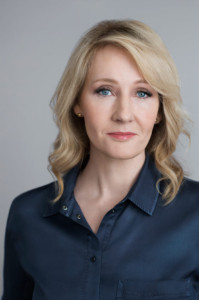 Well, I’d like to include a writer on my ‘inspiring women’ list and JK Rowling is certainly inspirational. As we all know, she wrote the first Harry Potter book as a struggling single mother, but has gone on to become the UK’s bestselling living author. However, in addition to her many professional achievements, Rowling is also inspiring for two reasons. Firstly, her impact extends not only across the world of books, but also across the charitable sector. Rowling supports numerous charities and organisations, but is particularly involved in anti-poverty campaigning and children’s welfare. She is a notable philanthropist who has used her professional success to benefit many others. Secondly, like many other inspiring women (and men), she is an advocate of living courageously and following your own path. Rowling has often talked about the importance of trying – and not being scared to fail. As she said in her speech to graduating students at Harvard: “You might never fail on the scale I did, but some failure in life is inevitable. It is impossible to live without failing at something, unless you live so cautiously that you might as well not have lived at all – in which case, you fail by default”. This seems an important and motivating message from a woman who has achieved so much. 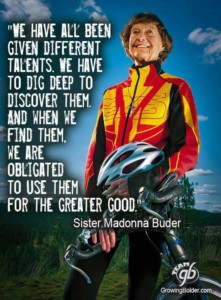 Last year, my husband took part in an Ironman Race. This endurance contest comprised a 2.4-mile swim, 112-mile bike ride and a 26.2-mile run, all over the course of (in his case) a tortuous 15 hours. As someone who hasn’t done too much formal exercise since school, I was full of admiration. But when I read about another Ironman participant, the so-called ‘Iron Nun’, my admiration turned to awe. At 86 years old, Sister Madonna Buder has completed more than 40 Ironman races over a 30-year period. Having completed her first Ironman race at the tender age of 55, she became the oldest woman to ever complete an Ironman triathlon at 75. At 82 years old, she set a world record as the oldest Ironman triathlon competitor. For me, Sister Madonna is truly inspiring because of her positive attitude, fighting spirit and her determination to defy conventional notions of ageing. It might be time to get out my running shoes yet . . . 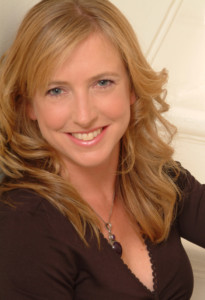 A few years ago Roz Savage, record-breaking ocean rower, author and motivational speaker, spoke at an event that I organised. Her words had a lasting impact on me – and, I’m sure, on everyone else in the room. Roz’s story is one of incredible personal transformation. After leaving university and working as a management consultant for 11 years, Roz decided to leave her job and home and change her life – totally! She reinvented herself as an adventurer and became the first woman to row solo across three oceans: the Atlantic, the Pacific and the Indian Ocean. Passionate about the environment and protecting our planet, she also used social media to share her story and eco message with tens of thousands of people. Now, having spent a total of 520 days alone at sea, rowing for 12 gruelling hours a day, she has become an authority on how to tackle challenges in difficult circumstances and what motivates us through the darkest of times. Roz’s journey from office worker to ocean rower is a perfect example of how anyone can change their life (and the lives of others) if they have enough courage, determination and resilience.

I hope you enjoyed this small selection of inspiring women – they are certainly all girls and women Pilot Jane would admire too! And thank you so much for having me on Tales of Yesterday. 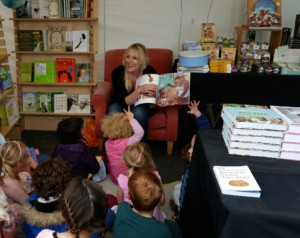 Caroline Baxter lives in Oxford with her husband and two young children. From an early age she always had her nose in a book – and now does so for a living! Caroline grew up in South Wales and, after graduating with a BA in English Literature from Cardiff University, held a variety of management roles at UK universities including, most recently, at the University of Oxford. The Bear Cub Bakers, her first book, was written while on maternity leave with her daughter. Her second book, Pilot Jane and the Runaway Plane, was published recently on International Women’s Day (8 March 2017). Caroline loves travelling, yoga, baking (and eating) cake, dogs, days out and snuggling up with a good story. 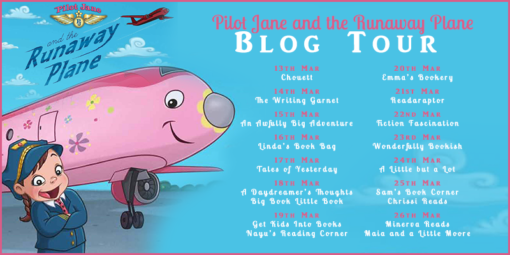 A huge thank you to Caroline for such a brilliant guest post and insight into the inspiration behind the book!  And to Faye Rogers for organising and asking me to be part of the blog tour!

Have you read Pilot Jane and the Runaway Plane?  What did you think?  Are you intrigued to go and grab a copy?  I would love to hear from you!  Why not leave a comment using the reply button above or tweet my on twitter using @chelleytoy!

#Gifted When you get the new @suewallman and have