Home Adult Fiction Spotlight – I Know Where She Is by S. B. Caves 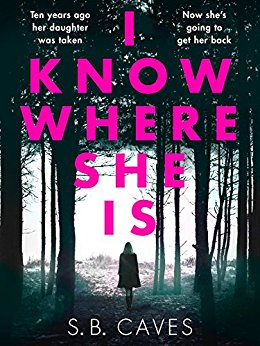 I am thrilled to have been asked to feature a chilling extract from new adult thriller, I Know Where She Is by debut author S. B. Caves as part of this fab blog tour.

I Know Where She Is was released on the 14th August 2017 on e book published by Canelo and is set to be an explosive gripping thriller for fans of Karin Slaughter, Linwood Barclay and Karen Dionne.

So today I am shining the light on this gorgeous book and sharing that chilling extract….. 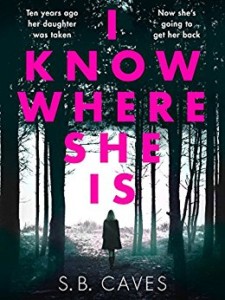 On the tenth anniversary of her daughter Autumn’s abduction, Francine receives an anonymous note containing just five words: I KNOW WHERE SHE IS

When a young woman approaches her the next day claiming to have sent the letter Francine wants to dismiss it as a cruel, twisted joke.

But the stranger knows things that only Autumn would know.

It soon becomes clear that Francine must go to dark places in order to learn the truth about her child’s kidnapping.

She will discover that danger comes from unexpected sources. She will do things she never imagined herself capable of.

But will Francine get her daughter back – or is it too late?

I Know Where She Is – Extract

At five a.m., a full two hours before her alarm was due to sound, Francine kicked out of the twisted sheets and got dressed. She wasn’t sure whether she’d dozed at all, but guessed that she’d probably managed to snatch a few minutes of shallow sleep. Her mind had whirred incessantly, the caffeine and anxious excitement making it impossible for her to switch off.

It was still pitch black as she drove to the gym, but it had stopped raining. It wasn’t unusual for her to put a shift in on the free weights before work, but today she’d given herself enough time to swim too. The pool didn’t open until seven, so she did the rounds on the cross-trainer, the treadmill – upping the incline almost vertically – and her usual dumb-bell routine. All the while she’d been eyeing the punchbag. She’d always wanted to use it but couldn’t trust herself not to scream as she unloaded on it. She wasn’t really sure how to go about hitting the thing, but the place was virtually empty, so she could afford to look silly. She picked up a pair of gloves that lay by the side and slipped them on, then gave the bag a few jabs for practice. It felt good. Once she’d settled into a rhythm, the volume of punches increased, as did their ferocity. Soon her arms were throbbing and her lungs flamed inside her. She punched until she could no longer lift her hands, her slick forehead resting against the bag.

Afterwards, she swam for an hour without stopping. She couldn’t remember ever having done that before, especially after such a strenuous workout, but she wanted to push her body until she’d burned all that anxiety to cinders.

Her body was a patchwork of pain by the time she sat down at her desk. It was as though she’d given her mind a spring-clean, sifting all that sludge, and now she could focus. She worked solidly through to lunch, processing invoices and sending out reminders, only stopping to confer with colleagues where absolutely necessary. All of the six employees crammed into the tiny back office of Worldwide Golfing Supplies knew Francine’s story, and they had never tried to engage her beyond routine chit-chat. That suited her fine. When she’d first started, one of the other accountants, a divorcee named Henry who drank lots of black coffee and ate neatly cut ham sandwiches for lunch, asked her if she would like to go for a drink some time. Francine offered him only sincerity in her reply: no, she didn’t want to go for a drink – not now, not ever. She hoped her expression would dissuade any future attempts at courtship. He didn’t ask again.

As usual, she left her desk and went for a stroll during her lunch hour. She stopped at Starbucks for a cappuccino and bought a newspaper from the corner store before walking to her car. She liked having lunch in her car, comforted by the notion that at any second she could turn on the ignition and drive away forever.

She began skimming the newspaper, waiting for her cappuccino to cool. Quite suddenly, the lack of sleep and the exertion of her morning workout seized her. She could feel her eyes losing focus on the page, her head dipping. She placed the cup in the holder and closed her eyes. Very soon, she was out.

When she woke, her coffee was cold and a girl, maybe eighteen years old, was standing in the centre of the parking lot, staring at her. The wind whipped the girl’s hair about her face, tugging at her frumpy dress. She had scrapes and scabs lining her legs and was drowning inside a man’s bomber jacket. Francine yawned, looked at the clock, then back at the girl, who still hadn’t moved.

She got out of the car and stretched. The girl turned on her heel and cut briskly across the parking lot, casting glances over her shoulder before vanishing through the automatic doors of the small indoor market.

Francine returned to her desk ten minutes late from lunch, but nobody seemed to notice. While she was in the middle of composing an enthralling email to their suppliers regarding low stock on fluorescent golf tees, it began to rain again. The first drops plinked against the window, and then a low rumble of thunder distracted her. She stopped typing and looked out into the parking lot. The girl in the baggy bomber jacket was standing next to her car, peering curiously inside like a child at an aquarium. Francine stood up and watched as the girl cupped her hands around her eyes and pressed herself up against the car window for a better look, before walking round to the passenger side, idly running her finger along the bodywork, then scoping out the back seats.

‘What’s she doing?’ Francine muttered to herself. She walked out of her cubicle and left the office, hurrying down the corridor before taking the stairs two at a time. Pushing through the double doors of the reception, she marched toward the car. ‘Excuse me? Can I help you?’

The girl had been looking through the back window when she snapped upright at the sound of Francine’s voice. From a few yards away, Francine thought she saw something amiss in the girl’s expression. It was only as she neared that she noticed that she was severely cross-eyed, her pupils pulling away from one another like magnets. Kermit the Frog, Francine thought. She has eyes like Kermit the Frog. Given the distraction they presented, those eyes made it impossible to tell whether the girl was pretty or not. She appeared gaunt, birdlike almost, her hair a blonde so dull it bordered on silver.

‘I put a letter through your door. Did you get it?’

Or why not add it to your Goodreads List here

About S. B. Caves 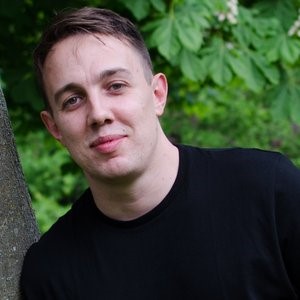 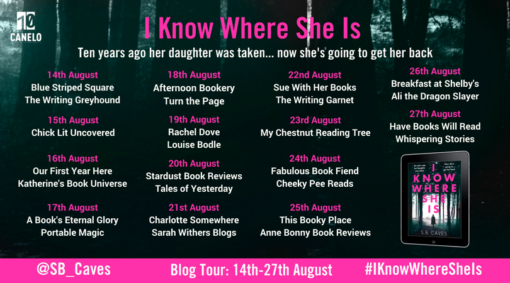 A huge thank you to S. B. Caves and Canelo for letting me share this fab extract and for having me as part of the blog tour.

Have you read I Know Where She Is?  Are you intrigued?  Do you love a good thriller?  I would love to hear from you!  Why not leave a comment using the reply button at the top of this post or tweet me on twitter using @chelleytoy !