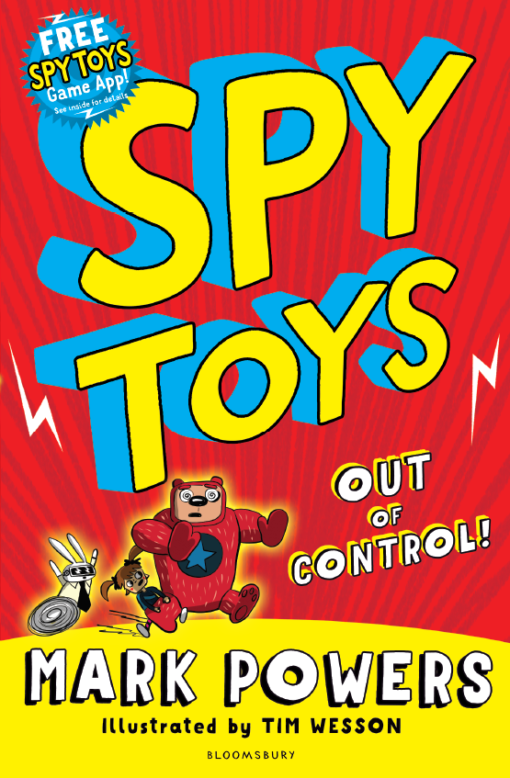 Today I am super excited to be part of the fab blog tour for a brilliant new super fun middle grade book, Spy Toys:  Out Of Control by Mark Powers and illustrated by the super talented Tim Wesson!

Spy Toy: Out Of Control was released on the 10th August 2017 published by the lovely people at Bloomsbury and is the second book in the Spy Toys series! 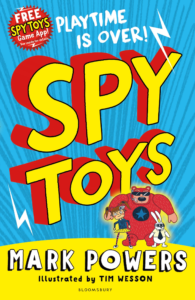 Today Mark Powers chats about The Art Of Naming Characters in this fab guest post…. 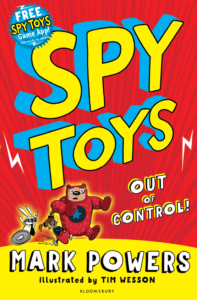 Fresh from the success of their first mission, our heroes the Spy Toys – Dan the Snugaliffic Cuddlestar bear, Arabella the Loadsasmiles Sunshine Doll and Flax the custom-made police robot rabbit – are ready for their next task. This time, the secret code that controls every Snaztacular Ultrafun toy has been stolen and all over the world toys are revolting and turning against the children who own them.

Can Arabella disguise herself as a super-sweet little doll in order to find out more from the daughter of Snaztacular’s top scientist? Can Dan and Flax chase down Jade the Jigsaw, the puzzling prime suspect for the robbery? And can they save the day before the mind-controlled toys forget what it means to play nice?

The Art Of Naming Characters

In creating the evil elephant/human hybrid character Rusty Flumptrunk for my first SPY TOYS adventure, I took a leaf out of the book of my favourite writer Douglas Adams, one of the champion character-namers of all time. He came up with the name Slartibartfast by taking a string of extremely rude words and changing each very slightly until he had something that sounded rude, but wasn’t. If you ever find yourself on a long and boring train journey or you’re waiting to get served in your nearest branch of Curry’s and have a couple of hours to kill, you may like to ponder exactly which naughty words went into the construction of Rusty Flumptrunk.

Sometimes the unexpected use of a simple name can be humorously effective. In my new book SPY TOYS: OUT OF CONTROL, I needed a name for a unicorn. One immediately thinks of the poetic, mystical names that the great fantasy writers have dreamt up for their magical beasts: Lewis’s lordly lion Aslan, Tolkien’s slumbering dragon Smaug and Pratchett’s vast, world-bearing turtle Great A’Tuin. Which is why I decided to call my unicorn John. John the unicorn.

My current favourite coiner of fabulous names is British fantasy author Michael Moorcock, in particular the baroque handles he gives to the decadent eccentrics who populate the future Earth in his series The Dancers at the End of Time. Jherek Carnelian. The Iron Orchid. Sweet Orb Mace. Lord Jagged of Canaria. Mistress Christia. The Duke of Queens. Argonheart Po. Gaf the Horse in Tears…the list goes on. Pure pleasure.

So what’s the secret of a good character name? Lordy. Who knows? You definitely know one when you see one, or if you’re lucky, when one bubbles up from your unconscious. But there’s no guaranteed formula for creating them. All you can do is painstakingly slam different phonemes together at random in the hope of precipitating a kind of literary alchemy.

One thing I am certain of, however, is that no matter how stretched their imagination or short their deadline, no author would ever consider giving a character a name as silly as ‘Donald Trump’.

You can buy a copy of Spy Toys:  Out Of Control here or from your local bookshop 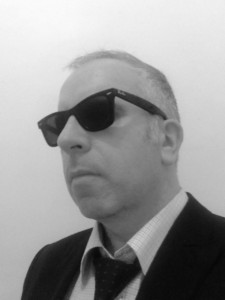 Author Mark Powers has been making up ridiculous stories since primary school and is slightly shocked to find that people now pay him to do it. As a child he always daydreamed that his teddy bear went off on top secret missions when he was at school, so a team of toys recruited as spies seemed a great idea for a story. He grew up in north Wales and now lives in Manchester. His favourite animals are the binturong, the aye-aye and the dodo. www.spytoysbooks.com

You can find out more about Mark on his website – www.spytoybooks.com 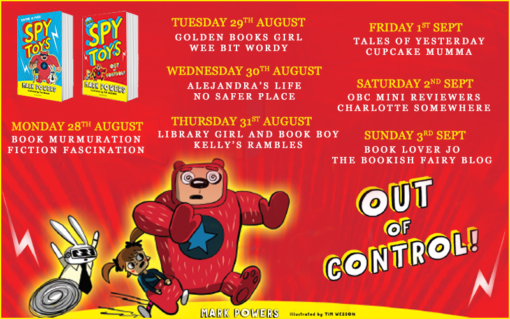 A huge thank you to Mark for such a fab guest post and to Faye Rogers and Bloomsbury for having me as part of this fab blog tour!

Have you read Spy Toys: Out Of Control?  What did you think?  Who was your favourite character?  I would love to hear from you!  Why not leave a comment using the reply button at the top of this review or tweet me on twitter using @chelleytoy!