It’s Christmas Eve and what better way to celebrate than to have a wonderful author here on the blog!

Today I have the super wonderful Stephanie Kate Strohm on Tales to celebrate the release of her new YA romantic comedy, Prince In Disguise published by Disney-Hyperion.

I was lucky enough to meet Stephanie this year when I chaired an event at Waterstones Birmingham and lots of laughs were had so I literally cannot wait to jump into this book!

Prince In Disguise finds our main character Dylan as part of a reality TV programme so I thought it would be great to hear all about Stephanie’s favourite reality TV guilty pleasures….. 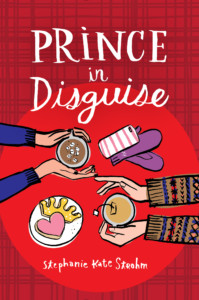 Someday I want to live in a place where I never hear ‘You’re Dusty’s sister?’ ever again. Life is real enough for Dylan -especially as the ordinary younger sister of Dusty, former Miss Mississippi and the most popular girl in Tupelo. But when Dusty wins the hand of the handsome Scottish laird-to-be Ronan, Dylan has to face a different kind of reality: reality TV. At least there’s Jamie, an adorably bookish groomsman who might just be the perfect antidote to all Dylan’s stress… if she just can keep TRC from turning her into the next reality show sensation.

I watch…a lot of reality TV. But I also read a lot of books, so I think it totally evens out! Prince in Disguise, my newest book, combines these two great loves, as it is a book about a reality TV show! When Dylan’s older sister Dusty falls in love with a Scottish lord on a reality dating show, the entire family is whisked off to Scotland to televise the wedding, much to Dylan’s chagrin. Like Dylan, I wouldn’t want to be on a reality show, but I do love watching them! Here are a few of my favourites:

Say Yes to the Dress

Simple but brilliant. Brides head to Kleinfeld’s in NYC to shop for their dream dresses with the help of Kleinfeld’s stellar team of bridal consultants. Sometimes there’s drama caused by unsupportive family members, but there’s almost always a happy ending as the bride says yes to the dress. I could watch an infinite amount of these back-to-back-to-back, even though every bride with a budget over a certain amount ends up choosing the exact same Pnina Tornai gown.

My Fair Wedding with David Tutera

This show has since rebranded itself as first David Tutera: Unveiled and then David Tutera’s CELEBrations, but it is not as good as it was in the halcyon days of My Fair Wedding, specifically the masterpiece that is Season 3. Celebrity wedding planner David Tutera helps brides short on time, money, or organizational abilities miraculous pull together their dream weddings. The themes – and the weddings – became increasingly elaborate as time went on, often with such high production values that they looked more like film sets than weddings. My beloved Season 3 brought up such treasures as a Phantom of the Opera wedding, a Wizard of Oz wedding, an Alice in Wonderland wedding, and a mini-truck wedding. (That’s right. The theme of the wedding was small trucks.)

The weddings on Four Weddings are never the over-the-top confections David Tutera might dream up, and in some ways, that’s part of their appeal. Four strangers from the same area meet and then attend each others’ weddings, ranking them in such categories as dress, venue, food, and overall experience. There’s something kind of evil but also deliciously fun about watching people say out loud all the judgmental things you think when you’re at your cousin’s/sorority sister’s/whoever’s wedding.

The only thing I love more than weddings is eating. (So if your wedding has really great food, yes, it would be my ideal event!) There are a lot of reality TV cooking competitions (see: basically all of Food Network and Cooking Channel), but for me, nothing beats Top Chef. I love getting to know the chefs and their stories, I love the challenges and the different restaurants and farms they visit, but most of all, I love seeing plate after plate of delicious food. The only thing it’s missing is some romance. If a few more of these chefs would start kissing each other, then it would literally be a perfect show.

When I was on vacation in England, I caught an episode of The Geordie Shore. It was like Jersey Shore, but way better! I quickly became obsessed and spent way too much time watching it. I have since read all of Charlotte Crosby’s books and done her 3 Minute Belly Blitz workout. Since no one in the states knows who Charlotte Crosby is, I have no sense of how embarrassed I should be about this. (Like, for example, I would never admit to anyone that I’d done Snooki from Jersey Shore’s workout, if such a thing existed.) 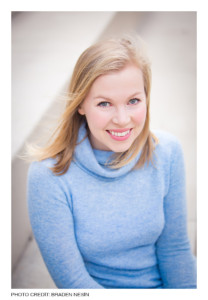 STEPHANIE KATE STROHM is also the author of Pilgrims Don’t Wear Pink, Confederates Don’t Wear Couture, The Taming of the Drew, and It’s Not Me, It’s You. She works as an actress and teacher in Chicago. Visit her website at www.stephaniekatestrohm.com and on Twitter @stephkatestrohm.

A huge thank you to Stephanie for such a fab guest post and to Amy at Disney-Hyperion for getting in touch about hosting.

Have you read Prince In Disguise?  What did you think?  Do you enjoy reality TV?  What are your favourites?  I would love to hear from you!  Why not leave a comment using the reply button at the top of the post or tweet me on twitter using @ChelleyToy !