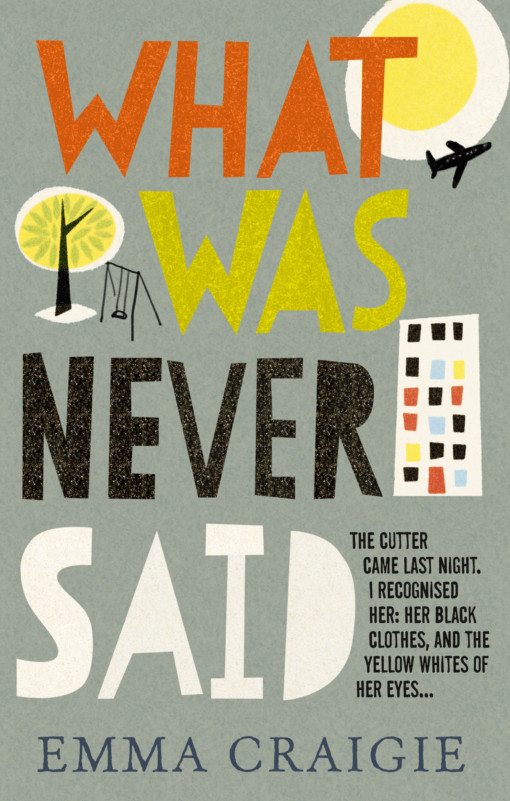 Today is my stop on the fab #YAShot2018 Blog Tour and I have been paired with the wonderful Emma Craigie! 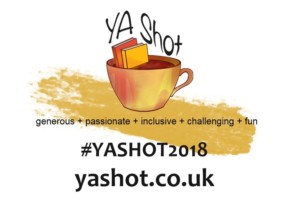 YA Shot is an author-run, author-led Young Adult and Middle Grade festival that raises the money and resources to run a year-long programme pairing libraries and schools for free author events to foster a love of reading, inspire a passion for writing, and encourage aspirations to careers in the Arts. We believe in equal access to books and opportunities for all – YA Shot brings UKYA and UKMG authors together to pursue that goal, supporting libraries and young people across the country.

So for our stop I wanted to get to know Emma and her books a little more and to find out a little about her inspiration…. 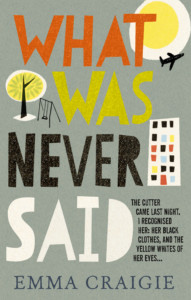 The cutter came last night. I recognized her: her black clothes, her narrow face and the yellow whites of her eyes. 15-year-old Zahra has lived in England most of her life, but she is haunted by memories of her early childhood: the warm sun and loud gunfire, playing with her older sister in the time before “the visitors” came. It is hard to make sense of everything that happened, and it feels impossible to talk about, but when three eerily familiar women arrive unexpectedly for tea Zahra realises that the dangers of the past could still destroy her. What Was Never Said is the powerful story of a girl navigating the demands of two very different and conflicting worlds; a tale of surviving loss and overcoming fears.

Helga’s childhood as the eldest of five children in Germany’s First Family has been a gilded one, accompanying her parents to parties and rallies, moving between the city and their idyllic country estate. But the war has changed everything. And now, as defeat closes in on the Germans, Helga must move into a bunker in the heart of Berlin with her family and key members of the crumbling Nazi leadership – to be with their beloved Hitler. There is chocolate cake for tea every day with Uncle Leader, but Helga cannot help noticing that all is not well among the grown-ups. As each day passes, her underground world becomes increasingly tense and strange. There are tears and shouting behind slammed doors, and when even the soldiers who have been guarding them take their leave, Helga is faced with a terrible truth. Perhaps her perfect childhood has not been all that it seemed…

What Was Never Said is the story of a teenage girl who has to confront a painful past in order to protect herself and her younger sister.   Zahra and her family have come to England to escape war, but there are secrets in the family, and as her parents’ plans become clear, Zahra realises her new life is no longer safe.

The idea for What Was Never Said came into my head on a Saturday morning in July in 2012.  I was sitting in a huge auditorium in Bristol University when a skinny boy stepped across the stage in front of a long row of adults – health and legal experts from across the world – and came to the front holding a hand mic.  The hall fell silent as he began to speak:

You don’t understand how weird it is to be standing here as a MAN, yes, not a boy, a man, from my community, talking about Female Genital Mutilation.  Believe me, Somali men never talk about womens bits, even amongst themselves.

The audience laughed uncomfortably.   I squirmed inwardly.  I had met this boy a couple of times. His name was Mukhtar Hassan, he was 14 years old and a member of Integrate Bristol –http://integrateuk.org/ –  a group which facilitates campaigns by young people.  Integrate had organised this conference,  the first ever international conference about Female Genital Mutilation, and my immediate feeling was that they had got it wrong.  Muhktar’s words were embarrassingly slangy.  “Bits” made me cringe –  not a word, I felt, which should be spoken in such a formal setting.   I held my breath, hoping things would get better.

I had met Muhktar, his older sister Muna, and the other young members of Integrate when I was doing research for a novel about a group of young friends from different religious backgrounds.    Like many young people in East Bristol they came from a Muslim Somali background – a community where FGM is still often practised.   I was really interested in the boldness and clarity of their campaign.   I didn’t know much about FGM but I soon learnt from them.  FGM is defined as non-medical surgery on the female genitalia. There are a number of different types, all of which cause tremendous pain, bring a risk of infertility and death, and deprive women of sexual enjoyment.   FGM has been carried out in some parts of the world for thousands of years, and is estimated that there are over 200 million women and girls alive today who have undergone some form of it.  It  The World Health Organisation estimates that there are 3 million girls at risk of FGM every year.   These young people were – are – determined to end it and had brought together international experts to determine how that could be done.

Muhktar continued on the failure of Somali men to talk about ‘women’s bits”:

… perhaps thats the problem.  Too many people have been quiet for too long.  But the point is IF FGM is to stop, and it HAS to stop, then everybody, regardless of gender or race, has to take a stand.  I stand here as a brother, a cousin, a son, and a future father… hopefully.  I also stand here as a friend and a human being.

I breathed out. The audience applauded loudly.  Muhktar had not got it wrong.  He had got it completely right.  He had made us uncomfortable and challenged us to overcome that discomfort.   Up to this point, I thought, like many people, that FGM was a bad thing, but that it was not my problem.   Muhktar changed my perspective.   If a 14 year old boy could stand up in front of hundreds of people and talk about “women’s bits” , I could stand up too.   Suddenly the centre of my novel shifted.   I had found the story which I needed to tell.

Chocolate Cake with Hitler is a novel which tells the true story of the children of the Nazi Joseph Goebbels. 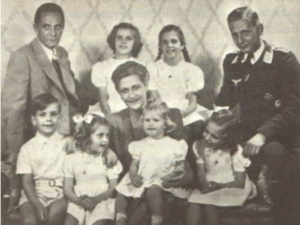 Chocolate Cake With Hitler also started with a sudden realisation.    I had long known that at the end of World War 2 Hitler hid in an underground bunker.  I remember picturing it when I was a child, imagining Hitler lying flat in some kind of coffin shaped rabbit hole, hiding from his advancing enemies.   It must have been shortly afterwards that I heard of the fact that Eva Braun, his wife, was with him, as I can remember trying to squeeze her into this imagined bunker.   But it was much later,  long after I understood that the bunker was a concrete network of rooms, full of soldiers and secretaries, and cooks and nurses and doctors, that I learnt that there were six children down in the bunker with him.  And when I realised this, I couldn’t believe it was so little known that there had, at that point, never been a book about them.

There were five girls and one boy, aged between 4 and 12.  The children of the Nazi propaganda minister, Joseph Goebbels and his wife Magda.   10 days before Germany surrendered, they had decided to show their loyalty to the Fuhrer by joining him underground in Berlin.  They knew the defeat of Germany was inevitable – but that was not what they told the children.   They pretended that they were joining their leader so that they would be with him for the imminent victory celebrations.

I started reading every account I could find of Hitler’s bunker.  The children rarely got a mention.  The person who gave them most attention in her account of her days in the bunker was one of Hitler’s secretaries, Traudl Junge.   There was a particular paragraph in her memoir, Until the Final Hour, that haunted me, and was the inspiration for telling the story of the Goebbels children from the perspective of 12 year old Helga. 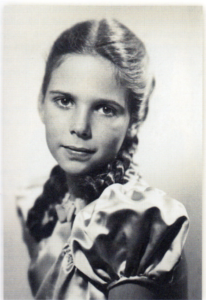 Junge wrote that during their time in the bunker the children were on the whole “happy and cheerful…”  They spent their time playing in the bunker corridors and once a day drank hot chocolate and ate chocolate cake with Hitler, often singing German folk songs to him.  Junge tells us, “They knew nothing of the fate awaiting them, and the adults did all they could to keep them unaware of it… Only the oldest, Helga, sometimes had a sad knowing expression in her big, brown eyes… Sometimes I think with horror that in her heart the child saw through the pretence of the grown-ups.”

I was the oldest of five children, and I remember being 12.  It was an odd age – my younger brothers and sisters suddenly seemed very childish, but my parents and their friends were no more interesting to me.  I could hardly bear to imagine a world in which the parents were planning to kill you, and none of your siblings had any idea.   But then I couldn’t bear not to.

You can buy a copy of Emma’s books here or from your local book shop!

Chocolate Cake With Hitler was nominated for the CILIP Carnegie medal and the Financial Times / Authors Club First Novel Award.

What Was Never Said was also nominated for the CILIP Carnegie medal and is a White Raven Book.  http://www.childrenslibrary.org/servlet/WhiteRavens 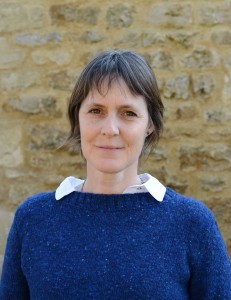 Emma Craigie is a writer and teacher.  She lives in Somerset.

Her most recent novel, What Was Never Said, was nominated for the CILIP Carnegie Medal 2016 and selected for the White Ravens Catalogue .

You can find out more about Emma on her website – www.emmacraigie.co.uk

With thanks to the lovely people at Short Books myself and YA Shot have a copy of each book to giveaway to one lucky winner!

Make sure you follow the rest of the fab YA Shot 2018 Blog Tour!

A huge thank you to Emma for such a fab post which has made me super intrigued to go and grab these books and to Short Books for the giveaway.  Also a huge thank you to YA Shot for having me and for pairing me with Emma.

Have you read any of Emma’s books?  Are you intrigued? Are you going to YA Shot?  I would love to hear from you!  Why not leave a comment using the reply button at the top of this post or tweet me on twitter using @chelleytoy !