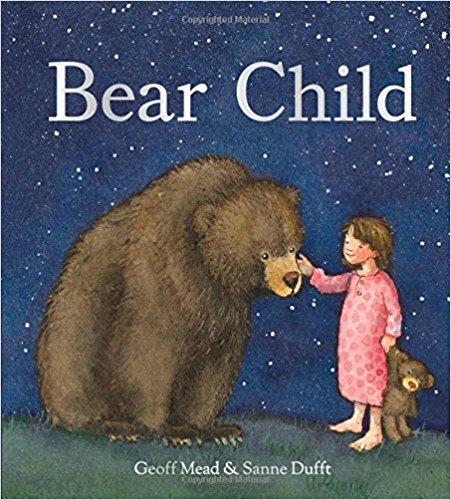 Today we are celebrating this gorgeous book by Geoff Mead and Sanne Dufft, Bear Child.

Bear Child was released on the 22nd February 2018 published by Floris Books and is simply gorgeous through and through. 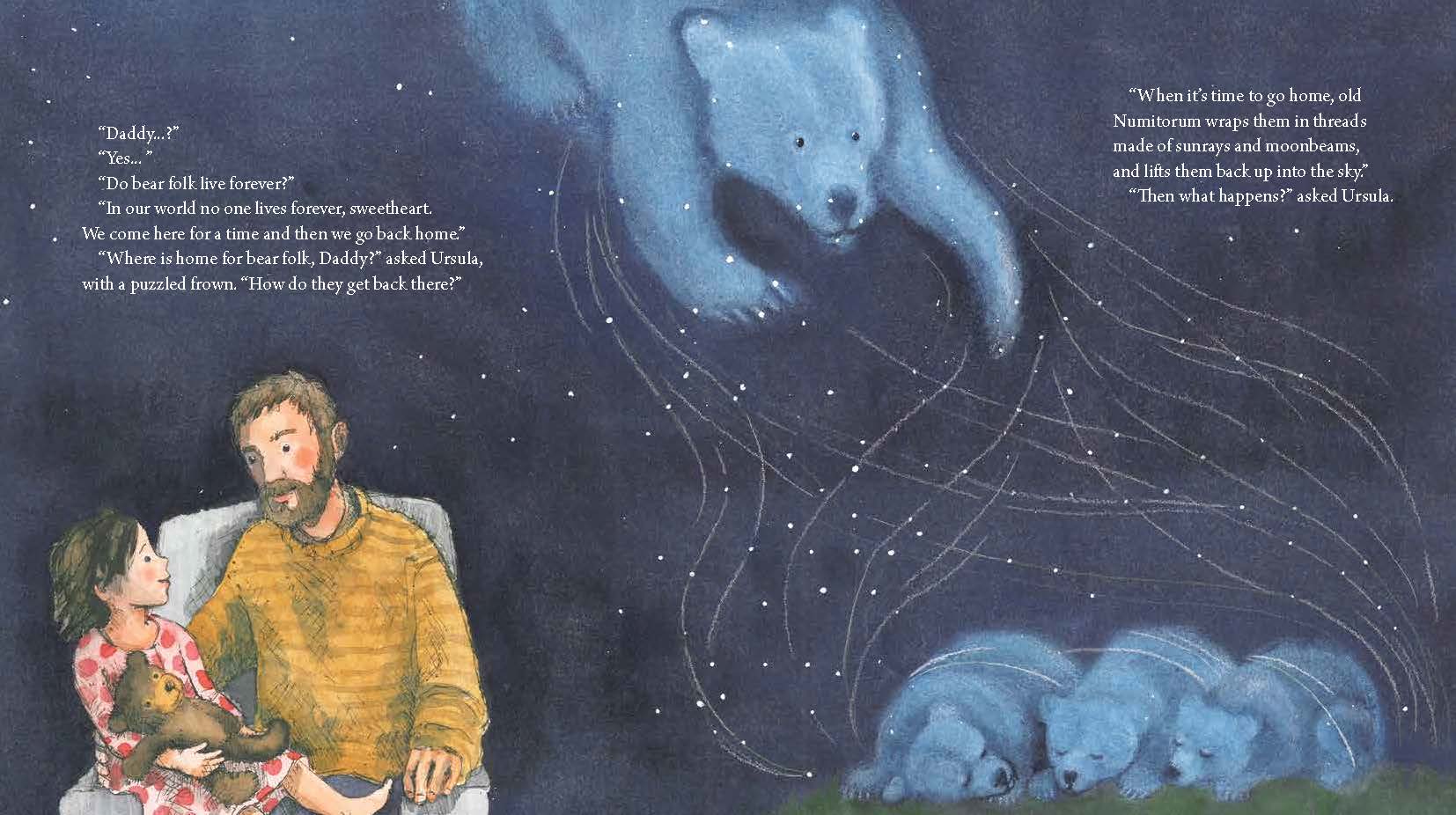 Today Geoff chats about writing to cope with loss in this wonderful, beautiful guest post… 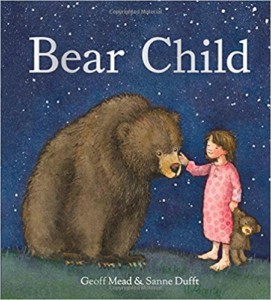 ‘Now that people live in towns and bears live in the woods, have you ever wondered what happened to the bear folk?’ At bedtime Ursula asks Daddy to tell her the tale of the bear folk: special beings who can choose to be either a bear or a person, depending if they want to catch a fish or read a book. Bear folk live extraordinary lives, he tells her. They are strong and clever, kind and loving, adventurous and creative — just like her. Will I ever meet one?, Ursula asks. Perhaps she already has… Bear Child is an inspirational story of parental love, belief and embracing individuality. This beautiful picture book weaves together Geoff Mead’s charming words with Sanne Dufft’s ethereal illustrations to create a truly timeless folktale. 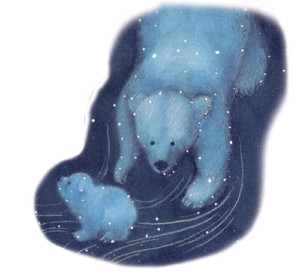 Writing Through Grief And Loss

All sorrows can be borne if you put them in a story or tell a story about them.

So said Out of Africa author Isak Dinesen, in a 1957 New York Times interview. She knew a thing or two about sorrow, having lost her father to suicide, her husband to divorce, her health to syphilis, her lover to a flying accident, and her beloved Kenyan farm to bankruptcy.

When my wife Chris became ill in 2013 and died a year later from the effects of a brain tumour, I wrote – as Dinesen herself had written – because the story was all I had. Telling it was the only way I knew to bear the sorrow. From that impulse to write, came two books: a children’s story, Bear Child (Floris Books) and a memoir, Gone in the Morning: A Writer’s Journey of Bereavement (Jessica Kingsley Publishing).

In a sense, Bear Child is a love letter to my wife. The character of Ursula is exactly how I imagined Chris had been as a child. I wrote the story as a gift for her when she was already very ill, to celebrate her fiercely independent spirit and her lifelong love of bears, and to give her an image of homecoming that she could turn to as she came to the end of her life. After a spell in hospital, she died peacefully at home and Bear Child was one of the last things we spoke about.

Chris loved the story and it has been thrilling to see how Sanne Dufft’s illustrations have perfectly caught its joyful, life-affirming energy.

About a month after Chris died, I found myself writing poems and short pieces about my experience of grief for no other reason than a deep-seated need to express my feelings. Profound loss shakes us to our very core: we lose not just the person we have loved but also our own sense of identity. In the vortex of grief, everything is out of kilter: time itself becomes disjointed. I found that by writing, I could hold memories more lightly, pay more attention to what was happening in the present moment and capture fleeting glimpses of hopes and dreams for the future.

Bereavement and loss are inherent in the human condition. Much is known about our generalised pattern of response: shock – denial – anger – bargaining – depression – acceptance. Yet each person’s experience is unique. Each of us has to navigate our own way through the terra incognita of grief. Writing from our own experience enables us to honour this journey and to chart the course we have taken, even if we don’t know where we are going. I published Gone in the Morning, not to provide expert guidance but simply in the hope that readers struggling with their own bereavement might feel less alone.

In the three years since Chris died, I have written stories, poems and regular blog posts and all this writing has served me well. None of it has diminished the pain of losing her. Rather it has heightened my experience of grief and deepened my understanding of how conscious mourning keeps things moving. I have gone through the whole gamut of emotions, but I’ve never felt stuck. Piece by piece, I have negotiated the narrative wreckage of Chris’s death and begun to re-story my life.

Who are the bear folk and what makes them special?

You can buy a copy of Bear Child here or from your local bookshop! 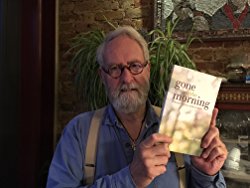 Born into the post-war baby-boomer generation, Geoff was the first member of his family to go to university (and the first to drop out). He quickly returned to complete his studies in mediaeval history after a salutary period washing cars for a living. With not much idea of what he really wanted to do, he cut off his shoulder-length hair and joined the police service which he left three decades later as a chief superintendent.

During those years he did pretty much everything from walking the beat to directing national police leadership programmes and from commanding a police district to training with the F.B.I. in Virginia, U.S.A. En route he also found time to train as an organisational consultant, complete an MBA,a postgraduate diploma in Gestalt psychology, and a PhD in action research.

He has worked as an educator, executive coach and organisational consultant for nearly two decades in the boardrooms of blue chip companies, universities, public sector organisations and government departments. In recent years he has specialised in board development, group facilitation and the use of story and narrative in organisations. Geoff is Director of Narrative Leadership associates – a consultancy using storytellng to help develop sustainable lreadership.(www.narrativeleadership.com)

He was on the faculty of the Prime Minister’s Top Management Programme and has co-designed and led national leadership programmes for the Cabinet Office. He has published a wide range of book chapters and articles on aspects of organisational and leadership development, action research (and latterly on storytelling) in professional and academic journals.

Geoff has four grown up children, five grandchildren and an entirely unreasonable love of Morgan sports cars. He divides his time between his late wife’s house in the Cotswolds and Lyme Regis where he dreams and writes in sight of the sea.

Sanne has illustrated many children’s picture books, including The Shepherd Boy and the Christmas Gifts. She won the Society of Children’s Book Writers and Illustrators European Conference Portfolio Content 2015. Her first authored book Magnus and the Night Lion will be available from Floris Books later in 2018.

You can find out more about Sanne on her website – sanne-dufft.de 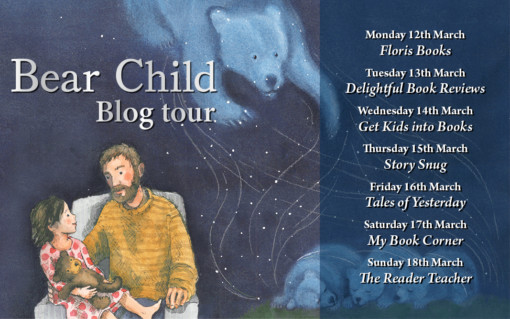 A huge huge thank you to Geoff for such a superb guest post and to CJ at Floris Books for asking me to host!

Have you read any of Bear Child? What did you think? What was your favourite part? I would love to hear from you! Why not leave a comment using the reply button at the top of this review or tweet me on twitter using @chelleytoy!