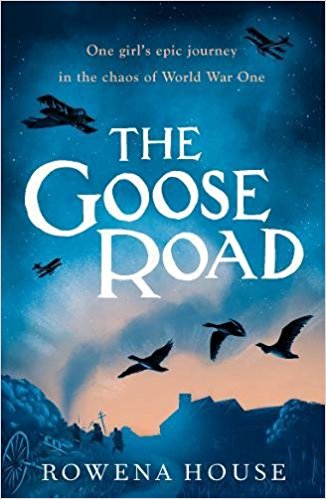 I am absolutely over the moon to have the brilliant Rowena House on the blog today to celebrate the release of her debut novel The Goose Road and the fact that Rowena is our debut of the month for our April #BritishBooksChallenge18!

The Goose Road was released on the 5th April published by the wonderful Walker Books and is a brilliant historical fiction read that will take you on the most wonderful journey.

So today Rowena talks to us about being a debut author in the fab guest post…the best bits and the worst…. 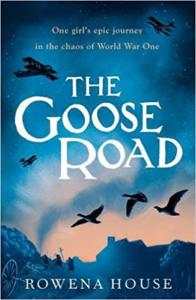 France 1916. Angélique Lacroix is haymaking when the postman delivers the news: her father is dead, killed on a distant battlefield. She makes herself a promise: the farm will remain exactly the same until her beloved older brother comes home from the Front. “I think of it like a magical spell. If I can stop time, if nothing ever changes, then maybe he won t change either.” But a storm ruins the harvest, her mother falls ill and then the requisition appears… In a last-ditch attempt to save the farm from bankruptcy, Angélique embarks on a journey across France with her brother’s flock of magnificent Toulouse geese.

At last all that effort is rewarded. The doubt is gone, that gnawing fear: will I ever make the grade? Hell, yes. I’ve got a book out there! It gets a bit knackering, punching your fist in the air, but basically that’s the feeling.

Discussing the inspirations for The Goose Road on social media recently brought home forcefully something I’d rather forgotten amid the nitty-gritty of copy edits, proof reading, building a website etc.

Angelique’s story is my take on a largely ignored side of life at a truly terrible time. I’m talking about how serious life can become for young people, and how sad, funny, strange and cruel.

I’ve had the privilege of spending years thinking about these things, and wondering how a peasant girl might, conceivably, have found the strength to deal with everything the First World War threw at her.

Now clever, creative people in the publishing industry are backing my imagination with their money & expertise – which is fantastic.

If there are lonely, tortured writers in garrets out there, I suspect they’re mostly trying to get some alone-time from all their writing mates, and tortured about how much time they spend on Twitter.

Because one of the very best bits about becoming a debut author is taking part in the wonderful world of writing communities online and in real life.

I’ve met an ocean liner’s worth of fascinating people over the past eleven years (which is how long it’s taken me to get here) many of whom I hope will remain friends for life.

You’ve served your apprentice. Lack of confidence now is self-inflicted

This one is probably personal as I tend to be over-confident as a person, which might be a mask for deep-seated fears and phobias. But, hey, I’ve got a book out. My neuroses can damn well get back in their cave.

Seriously, though, there is so much first-class, detailed, free advice available to writers that whatever your worry, help is invariably on hand.

Even if you don’t own a library of writing advice guides, there’s always support online. Try Emma Darwin’s impeccable blog, This Itch of Writing. Each time I’ve run into a problem, this site has offered me a considered, practical, do-able solution.

The next book will be better – and cheaper to produce

Confession: I’ve spent in excess of £10,000 on training, research and travel in my quest to get published. I like learning, I loved taking an MA in creative writing (my biggest expense) and I find the buzz of writing festivals energizing.

Also, I wanted to research The Goose Road thoroughly, which meant four research trips to France. Which I could afford. Just.

From now on, it’s me and the laptop and writing in my spare time while earning enough to fill in that £10k hole in my pension savings, and supporting my son through university.

That’s going to be tough. As a freelancer, I could dedicate my time to whatever I wished. But I’ve learnt so much that I know I can do it again – and better.

Getting published takes forever. Your need the patience of heaven’s entire communion of saints to survive this process with any sense of equilibrium – which I don’t have. Frankly, the waiting drives me nuts.

Getting a debut novel published is an achievement, a pinnacle moment. For the last eleven years I’ve been marching up to the top of this hill…

So yeah, it’s downhill now for the foreseeable future. And that’s because of…

I’m a breadwinner – and writing, famously, don’t earn you no bread.

As a member of the National Union of Journalists since 1983, I’m shocked at the level of pay for writers in the UK. The Society of Authors calculates that currently the average income from a single work of fiction is £6,000.

Naturally, I don’t yet know how well or badly my debut novel will sell, so the following figures are for illustration only – as I keep trying to reassure myself.

The Goose Road took me the full-time equivalent of approximately 15 months to write: three months research, six months for the first draft, three months for a structural edit, and another three for post-contract copy edits etc. and unpaid promotional work. Given a five-day week, that average income of £6k would work out at £20 a day.

Every moment I spend writing, I’m not doing something else. Like being with my family, walking the dog, earning a living, or campaigning to save African elephants or British badgers. I’ve made my choice. I won’t ever get that time back again…

So how do I know if it was worth it?

A debut is by definition a new thing. Untried and untested. Potentially weak, short-lived. Forgettable. How will I ever be able to judge if it was worth all the time, effort and resources it took to birth it?

The early reviews have been kind, for which I’m hugely grateful, but we live in a capitalist age; publishing is a business. So success – and with it the chances that Book Two will also make it into the shops – depends on sales as well.

Yet every experienced author I’ve ever come across tells debuts not to worry about sales: that way lies madness, they say. Get on with your next book, they say. It’s the only thing in your power.

So maybe this is the worst bit about being a debut author: that you’re still on the same road you’ve been travelling for years. There are new horizons, yes. But no guarantees whatsoever.

You can buy a copy of The Goose Road here or from your local book shop! 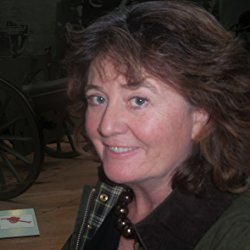 ROWENA HOUSE spent years as a foreign correspondent in France, Africa and then again in Europe before turning to fiction. She visited the WW1 battlefields of the Western Front repeatedly to research her prize-winning First World War short story, The Marshalling of Angelique’s Geese (WAR GIRLS, 2014) and again for her debut novel, THE GOOSE ROAD (Walker 2018). Her fascination with the Great War, the trenches, and the appalling artillery battles of the Somme and Verdun began at school when studying the war poets, Wilfred Owen in particular. As an adult, she experienced war first-hand as a Reuter’s reporter in Ethiopia, and saw its terrible impact on civilians. Now settled in the English countryside with her husband and son, Rowena holds a Master’s degree in rural economics and another in creative writing, and mentors fiction writers alongside her journalism and storytelling.

You can find out more about Rowena on her website – www.rowenahouse.com

With thanks to the lovely people at Walker I have 5 copies of The Goose Road to giveaway to 5 lucky winners!

I am hosting this giveaway through my twitter here

A huge thank you to Rowena House for such a fab guest post and to Jo Hardacre for asking me to host and sending me a copy of the book!

Have you read any of the The Goose Road?  What did you think?  What was your favourite part?    I would love to hear from you!  Why not leave a comment using the reply button above or tweet my on twitter using @chelleytoy!