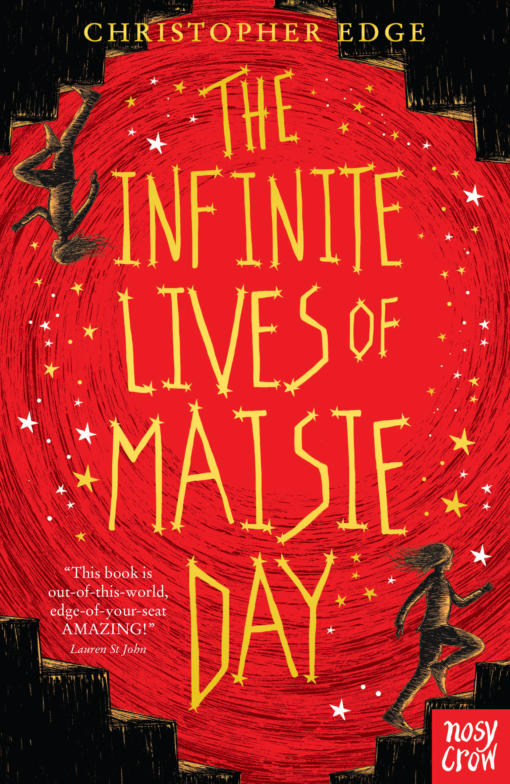 Today I am over the moon to welcome the fab Christopher Edge to Tales to celebrate the release of The Infinite Lives Of Maisie Day.

The Infinite Lives Of Maisie Day was released on the 5th April 2018 published by Nosy Crow and is another brilliant MG scientific jam packed adventure from the author of The Many Worlds Of Albie Bright and The Jaime Drake Equation. 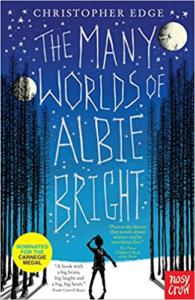 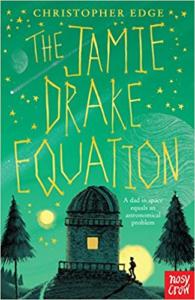 So today Christopher tells us a little about his writing inspiration in this fab guest post. 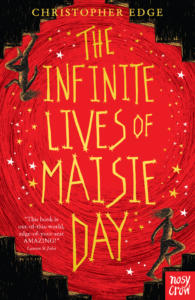 How do you know you really exist? It’s Maisie’s birthday and she can’t wait to open her presents. She’s hoping for the things she needs to build her own nuclear reactor. But she wakes to an empty house and outside the front door is nothing but a terrifying, all-consuming blackness. Trapped in an ever-shifting reality, Maisie knows that she will have to use the laws of the universe and the love of her family to survive. And even that might not be enough… A mind-bending mystery for anyone who’s ever asked questions. From the author of The Many Worlds of Albie Bright and The Jamie Drake Equation. Cover illustration by Matt Saunders.

Actually, I doubt it was to the day, but it was thirty years ago when I made the fateful decision to bunk off school and go along to a book signing by Neil Gaiman and Dave McKean instead.

I was fourteen years old, just starting my GCSEs at a rather bleak comprehensive school in Salford. This was the kind of school where the P.E. teacher forced you to do press-ups in an icy puddle at the start of every lesson, Woodwork and Metalwork were mainly concerned with the production of concealed armaments, and Chemistry lessons a constant battle for control of the gas taps between the kids who wanted to blow up the Science block and those of us who wanted to live. It wasn’t the kind of school where authors popped in to chat about their latest books and reveal the secrets of the writing life.

It wasn’t that I didn’t know about authors; my brain was full to bursting with their names. I was the Incredible Book Eating Boy before Oliver Jeffers had even drawn him, devouring the shelves of my local library. J.R.R. Tolkien, C.S. Lewis, Susan Cooper, John Wyndham, Arthur C. Clarke, Robert Cormier, Ursula Le Guin. With every book I took out, a new favourite author could be discovered and I’d then eagerly seek out everything that they had written.

As well as books I loved comics, a passion born from my paper round. As I waited for the newsagent to load up my delivery bag, I flicked through old DC and Marvel comics on a spinner at the back of the shop, the worlds of these four-colour heroes a welcome escape from the slate-grey streets. Then when Saturday came around, I’d spend every penny of my wages on these comic books: Batman, Detective Comics, Daredevil, 2000AD. That newsagent must’ve loved me!

After a while though, I’d finally depleted his stock of comics and had to look further afield for a fresh source. I’d seen an advertisement in the pages of 2000AD for a comic shop called Odyssey 7 in Manchester. So one Saturday morning, leaving the paper shop with my wages in my pocket for a change, I jumped on the bus into town to search out this shop. Trudging down Oxford Road, I turned into the shopping precinct at Manchester University and entered an Aladdin’s Cave.

Odyssey 7 didn’t just have a single spinner filled with comics; it had boxes of them running down the central aisle of the shop. Flicking through them, I could see comics about every superhero I had ever heard of and dozens more that I hadn’t. Along the walls were posters, magazines, and on a section of shelves filled with large, glossy books, something called graphic novels. That’s where I discovered Violent Cases by Neil Gaiman and Dave McKean.

I can’t remember what initially drew me to this book. Maybe it was the illicit promise of the title that appealed to my teenage mind. But when I picked it up and started to flick through the pages, I was entranced. It was like nothing I’d ever seen before. It was like nothing I had ever read before. In black-and-white and without a superhero in sight, it was a story about childhood told in the most remarkable way. This wasn’t a comic book, this was something else. Leaving behind the handful of Batman comics I’d already picked up, I took the book to the counter and bought my first graphic novel.

Over the next week I must have read Violent Cases more than a dozen times, each time finding some new detail to obsess over. For those who haven’t yet read it, I won’t give away too much, but something in this story sang to me. Its depiction of the narrator’s memories of his childhood: a fuzzy and confusing world, where adults lied and the threat of violence was never far from the surface, fascinated and troubled me at the same time.

The next Saturday I was standing at the counter of Odyssey 7 again, and, using the same logic that had served me so well in the library, asked if they had any more books by Neil Gaiman and Dave McKean. The man at the counter pointed me in the direction of a couple of new comic books, Black Orchid and the first issue of something called The Sandman, and then he told me something that changed my life.

“They’re coming in to do a signing next week.”

I looked up at the poster in the shop window. Neil Gaiman and Dave McKean would be signing copies of Violent Cases, the book that had blown my mind, next Friday afternoon. It was incredible – here was a chance to meet a real live author and a fantastic artist too. There was only one problem. The only way I’d be able to get to the signing in time would be to bunk off school at lunchtime. I think the time of the signing was 2pm, enough time I reasoned to get the bus into town, get my new favourite author to sign my books (I’d now bought the first issues of both Black Orchid and The Sandman as well) and still get home before my mum got back from work. That way I could pretend that I’d been in school all day, just like normal.

That was the plan. When Friday arrived, I sneaked out of school as the lunchtime bell rang and caught the bus into town. But arriving at Odyssey 7 just before two in the afternoon, I discovered my plan’s first flaw. Outside the store a queue snaked across the shopping precinct and out onto Oxford Road. (Remember, this was a signing for his very first book – Lord knows what kind of monstrous wyrm a Neil Gaiman signing queue looks like nowadays!) Joining the back of the queue I slowly started to worry. With the speed the queue was moving at, there was no way I’d get back home in time to pretend I’d been in school all day. If I stayed put, I was going to be in trouble. Big trouble.

Standing around me in the queue were trench-coated university students, their comic books and graphic novels tucked under their arms. I was still wearing my school uniform, my copy of Violent Cases, Black Orchid and The Sandman shoved in the depths of my school bag. This was the only chance I’d ever have to meet the extraordinary people who had created these stories. I stayed in the line

Eventually, sometime after four I think, I made it inside the shop, the remnants of the queue now snaking around the central aisle and back up to the counter where two guys were seated, patiently signing each book that was thrust in front of them. They didn’t look much older than students themselves, but the face of one of them was strangely familiar. From my bag, I dug out my copy of Violent Cases and turned to the first page. There, staring out at me in black and white was the same face. This was Neil Gaiman.

It’s funny, I’m trying to remember now what happened next, but my memories are turning out to be as fragmentary as those of the narrator of Violent Cases. I don’t really remember getting to the front of the queue, can’t recall what I said when I handed over my books to Neil and Dave to be signed. But when I finally stepped out of the comic shop and started walking back to the bus station and the inevitable mountain of trouble I was in, I remember thinking one thing: I wanted to be a writer. 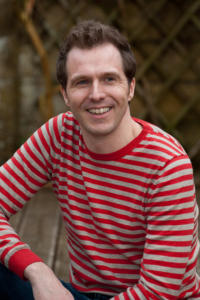 Christopher Edge is an award-winning children’s author whose books have been translated into more than twenty languages.

His novel The Many Worlds of Albie Bright won several children’s book awards including the Brilliant Book Award and was also nominated for the CILIP Carnegie Medal, as was his novel The Jamie Drake Equation, which was also selected by The Times as one of the best children’s books of 2017. His latest novel The Infinite Lives of Maisie Day was chosen by The Times as their Children’s Book of the Week and has been described as ‘out-of-this-world, edge-of-your-seat AMAZING!’ by Lauren St John.

His other books include the critically-acclaimed and award-winning Twelve Minutes to Midnight trilogy of historical mysteries, and he is also the author of How to Write Your Best Story Ever! and How To Be A Young #Writer, inspirational guides to creative writing for children and teenagers.

You can find out more about Christopher – christopheredge.co.uk 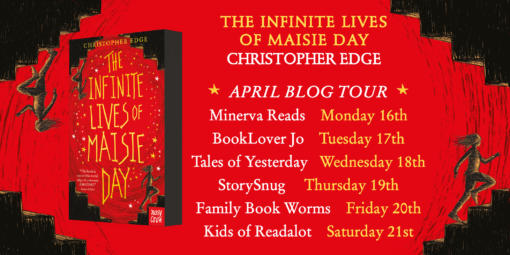 A huge thank you to Christopher for a brilliant guest post and to Antonia and Nosy Crow for asking me to host, be part of the blog tour and of course for sending me a copy of this fab book!

Have you read The Infinite Lives Of Maisie Day?  What did you think?  What was your favourite part?  I would love to hear from you!  Why not leave a comment using the reply button above or tweet my on twitter using @chelleytoy!