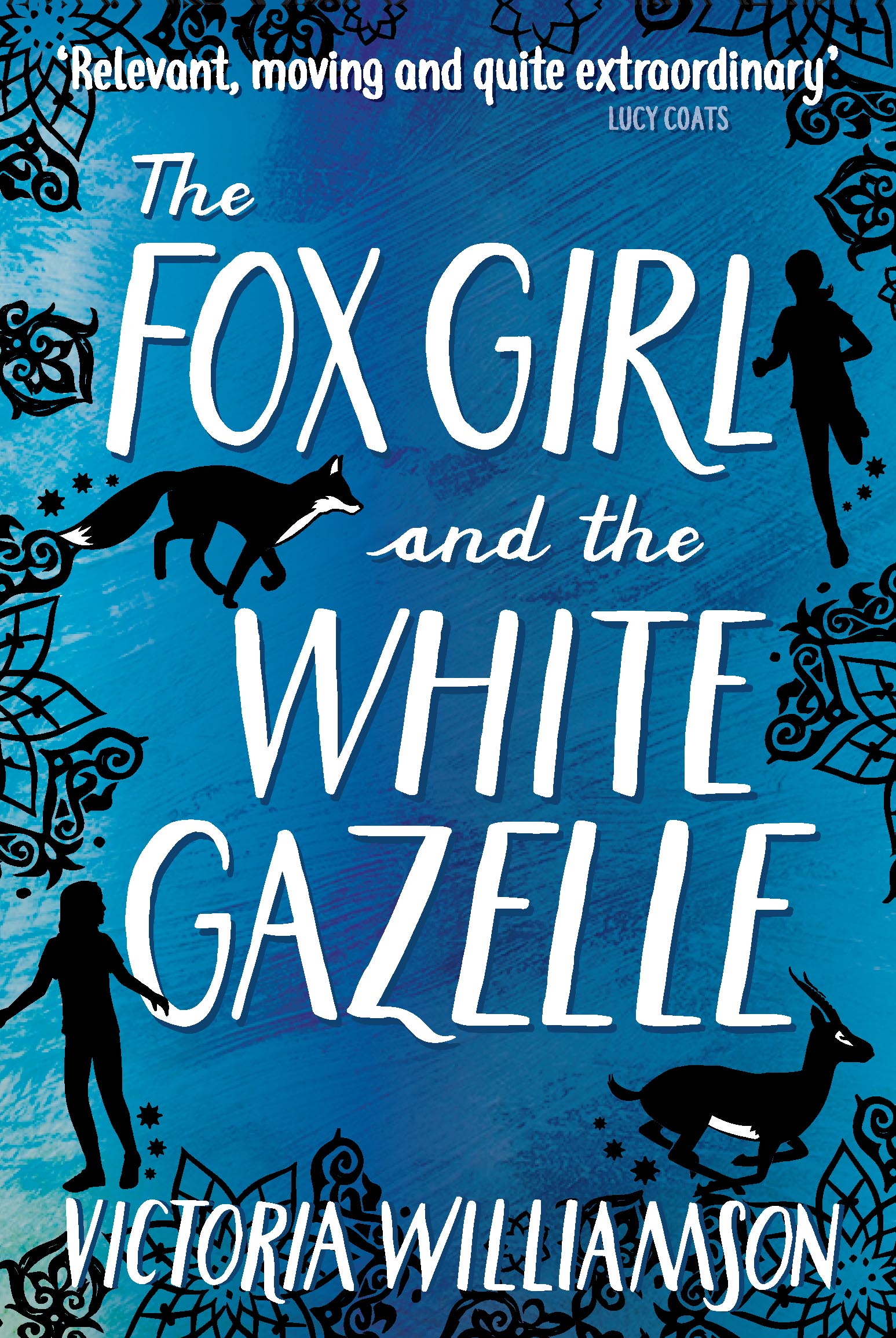 Today I am over the moon to have the lovely Victoria Williamson on Tales with a fab guest post to celebrate the release of The Fox Girl and the White Gazelle.

The Fox Girl and the White Gazelle was released on the 19th April published by the lovelies at Kelpies and is set to be a beautiful moving story that will keep you gripped until the last page. 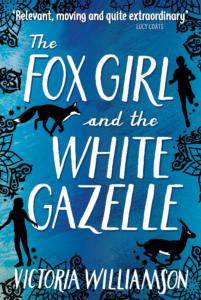 Reema runs to remember the life she left behind in Syria. Caylin runs to find what she’s lost. Under the grey Glasgow skies, twelve-year-old refugee Reema is struggling to find her place in a new country, with a new language and without her brother. But she isn’t the only one feeling lost. Her Glasgwegian neighbour Caylin is lonely and lashing out. When they discover an injured fox and her cubs hiding on their estate, the girls form a wary friendship. And they are more alike than they could have imagined: they both love to run. As Reema and Caylin learn to believe again, in themselves and in others, they find friendship, freedom and the discovery that home isn’t a place, it’s the people you love.

Heartfelt and full of hope, The Fox Girl and the White Gazelle is an uplifting story about the power of friendship and belonging. Inspired by her work with young asylum seekers, debut novelist Victoria Williamson’s stunning story of displacement and discovery will speak to anyone who has ever asked ‘where do I belong?’

‘A long time ago in a galaxy far, far away…’

Growing up, writing the start of a story seemed easy. I’d just pick one of the standard phrases copied from a fairy story or a film, and I’d be off on my adventure straight away without having to worry about character backstory or beginning with a bang.

Writing as an adult is a little trickier.

There are so many prescribed ‘dos’ and ‘don’ts’ for writing fiction it’s amazing any of us get the first paragraph of a book written at all! Most of the advice focuses on what we’re not supposed to do:

And one of the biggest ‘don’ts’ I’ve heard a million times:

• Don’t start with a character other than your protagonist

So how do you begin a story when your book is dual narrative and your two main characters are equally important?

In The Fox Girl and the White Gazelle, both Caylin and Reema tell the story from their own unique perspectives.

Caylin has lost her grandparents, and with her mother’s depression turning to alcoholism, she resorts to bullying other children for money and stealing to keep food on the table. She longs for the past when her grandparents were alive and she was part of a loving family. Her grandmother was a talented athlete, and Caylin keeps her memory alive through her passion for running.

Reema runs to remember too. She’s lost everything in the Syrian war, including her older brother Jamal, and she’s struggling to fit in and feel safe so far from home. Her memories of running through the streets of Aleppo after school with Jamal are bound up in the headscarf he bought her, and she clings on tightly to this as a symbol of everything she has lost and hopes to recover.

The way I chose to unite these two very different girls and begin their story, was by creating a metaphor for them, in the form of an injured urban fox they care for and come to call Hurriyah – ‘Freedom’ in Arabic.

Despite their different cultural backgrounds, both girls have suffered loss and are searching for a sense of belonging. Hurriyah’s own sense of loss over her dead mate, destroyed den and injured leg which prevents her from running, hunting and caring for her vulnerable cubs mirrors the girls’ struggles to overcome their own sad experiences.

So Hurriyah begins their story for them, her poems woven through the narrative to remind the reader that the girls want to feel both the safety of a permanent, settled home life, and the freedom to be themselves.

The ending of The Fox Girl and the White Gazelle however, proved harder to write. Not because I wasn’t sure how to wrap up the story, but because it’s always hard for an author to let go of characters who have been a big part of their life for so long. It’s almost like saying goodbye to old friends you’re never going to get a chance to talk to again.

One of the things all of my favourite books had in common when I was a child was the sense of loss I felt when I reached the last page and the story ended. Despite the serious issues involved, Caylin and Reema’s story is an adventure, and I’d like my readers to relate to these characters, and to feel invested in their quest to save the foxes and win their school a medal in the sports competition. I suppose the test of whether my book has had the intended impact on the reader is if they feel a little bit of the same sense of loss as me when they reach the last page and find they’ve come to end of Caylin and Reema’s journey too.

But I also wanted to end on an uplifting note. Hurriyah the fox’s refrain from the start of the story: ‘This is not home. It hurts,’ morphs into something far more hopeful at the end of the book when both Caylin and Reema realize that home isn’t a place, it’s the people you love.

That’s why I chose to end the story with an ellipsis instead of a full stop. The book may be stand-alone without a planned sequel, but the journey isn’t over for Caylin, Reema and Hurriyah. They’ve found friendship, belonging, and the sense of freedom they’ve been searching for, and so despite the fact that the book has ended, their adventures are only just beginning… 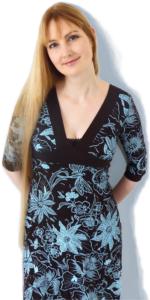 Victoria Williamson grew up in Glasgow, Scotland, and has worked as an educator in a number of different countries, including as an English teacher in China, a secondary science teacher in Cameroon, and a teacher trainer in Malawi.

As well as degrees in Physics and Mandarin Chinese, she has completed a Masters degree in Special Needs in Education. In the UK she works as a primary school special needs teacher, working with children with a range of additional support needs including Autistic Spectrum Disorder, Down’s Syndrome, physical disabilities and behavioural problems.

She is currently working as a full time writer of Middle Grade and YA contemporary fiction, science fiction and fantasy, with a focus on creating diverse characters reflecting the many cultural backgrounds and special needs of the children she has worked with, and building inclusive worlds where all children can see a reflection of themselves in heroic roles.

Victoria’s experiences teaching young children in a school with many families seeking asylum inspired her debut novel, The Fox Girl and the White Gazelle, an uplifting tale of redemption and unlikely friendship between Glaswegian bully Caylin and Syrian refugee Reema.

Twenty percent of her author royalties for The Fox Girl and the White Gazelle are donated to the Scottish Refugee Council.

You can find out more about Victoria’s books, school visits and upcoming events on her website: www.strangelymagical.com 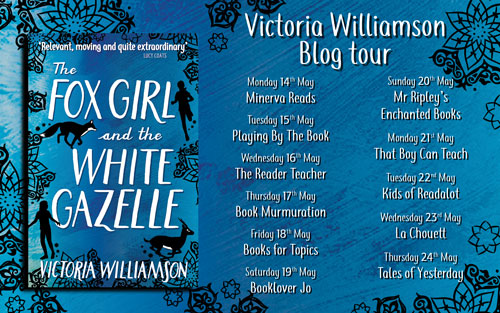 A huge thank you to Victoria for such a fab guest post and for asking me to be part of this fab blog tour!

Have you read The Fox Girl and the White Gazelle?  What did you think?  Why not leave a comment using the reply button at the top of the page or tweet me on twitter using @chelleytoy !