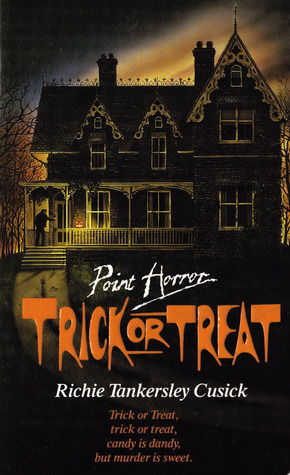 Today I have a spooky guest post featuring a book after my own pumpkin heart!

Today the Spooktacular Joshua Winning does just that talking about his ultimate Point Horror fave in the fab guest post…. 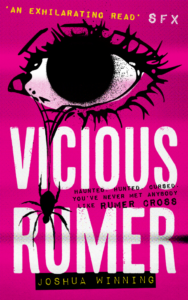 Jessica Jones meets Dragon Tattoo in a thriller that’ll keep you up all night.

A fresh and fiercely unique thriller, Vicious Rumer features one of the most complex and unusual heroines in years. The ruthless and independent Rumer Cross is a snarky survivor whose moving story explores notions of identity, family, death and redemption. It will appeal to fans of Patrick Ness, Ruth Ware and Joe Hill.

It’s very exciting to have Joshua here on Tales…I feel very honoured…so thank you so much Joshua!

7 reasons I love Trick Or Treat by Richie Tankersley Cusick 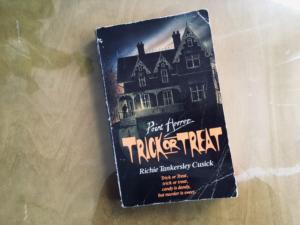 When I was a teenager, I devoured Point Horror books the way a zombie devours brains. Of the many, many I ate up, my favourites were Teacher’s Pet, The Accident and, top of the pile, The Babysitter, which I still couldn’t get enough of three sequels later.

But Trick Or Treat has a special place in my cold, dark heart because it’s a book I could return to every Halloween for maximum seasonal chills. It had everything you wanted from a creepy story, from the spooky mansion to the secret graveyard and beyond. In fact, I’m pretty sure the graveyard stuff directly inspired the cemetery scenes in my book Vicious Rumer (Unbound, 2018).

In the immortal words of the book’s dad, “Guess Halloween’s got me inspired!”, so here are seven reasons I still love this book, even though I haven’t been a teenager for a (very) long time…

Before I ever watched John Carpenter’s classic slasher movie Halloween, Trick Or Treat was my benchmark for holiday horror. It just gets so much of it right, in particular the very specific Halloween atmosphere of dread mixed with candy-stuffed excitement.

Richie Tankersley Cusick perfectly evokes the season with flourishes of detail, like the “trees nearly stripped by October winds”, and the house where “someone had propped a scarecrow against the porch, and its hideous face flickered… in the sputtering glow of a jack-o’-lantern”. I love Halloween, and this book captures the mood perfectly.

The front cover of this book is other-level spooky, but in a really simple way. That autumnal sky, the jack o’lantern and the bare tree are hella evocative, giving the book a subdued look that felt really grown-up when I was a kid. And then, of course, there’s the shadow of a person sneaking inside…

Even today, the art is really cool – I love old-school illustrated covers like this and wish they were more of a thing nowadays. Reading the book, I constantly referred back to the cover, which brings me to the next thing I love about Trick Or Treat…

This pile of bricks looks and sounds like something out of Psycho, only minus the motel, and, right from the start, the old Bedford place is spooky. Take our heroine Martha’s first glimpse of it. As Cusick writes, “The house looked strangely ghostlike, rising up through pale wisps of fog, its dark stone walls and chimneys interwoven with bare, twisted trees.”

Yeah, shudder, and it only gets more interesting the more you find out about it ­– there’s a reason this house immediately gives Martha the creeps. I love the idea of a closet door that keeps popping open (who hasn’t had a door like that?), and the fact that it leads somewhere dark and dangerous is even more disturbing.

Point Horror books are well-known for their fake scares, and while Trick Or Treat has its fair share, there are also plenty of genuinely hair-raising moments that really stick in the memory.

The backstory about Elizabeth is both tragic and scary, the scarecrow stuff is properly chilling, and the phone calls are genuinely unnerving: “You’re dead, Elizabeth. Trick or treat.” (If you want a movie equivalent, check out the movie Black Christmas (1974), which was some of the most disturbing obscene calls you’ll ever hear.)

The nuclear unit was getting pretty outdated even by 1989, when Trick Or Treat was published, and it was so refreshing to read a book about a family that didn’t sound like the Waltons. Martha’s dad has remarried, and Martha has to contend with a new step-mom (at least, until they go away) and her new step-brother Conor.

Conor is hot (“he was tall and slender, but his shoulders were broad… those strong shoulders hunched against the chilly night air”), quick-witted and tawny-haired (who isn’t tawny-haired in Point Horror?). Naturally, that leads to some really confused feelings for Martha (hello, sorta incest). Speaking of…

Martha is a bit of a whiny drip (all right, she’s a huge whiny drip) but her step-brother is all kinds of awesome. “There was just something about Conor,” Cusick writes, and she’s not wrong. He’s always ready with a killer quip, most of them at either Martha or his mother’s expense, and who doesn’t love a cute joker?

As Wynn notes, “Heads have been turning since he got here. Like the domino effect every time he walks down the hall. They haven’t been able to keep their eyes off him.” I mean, who wouldn’t want to hang out with this guy? He’s brilliant and clearly the hero of the book.

Warning: SPOILERS! This book has such a great twist ending that I genuinely didn’t see coming. Of course, re-reading it, Cusick cleverly weaves in subtle clues from the start, particularly with the idea of a family who all look alike.

Cusick keeps us guessing right up until the final couple of chapters, when Martha and Conor finally discover the secret passageway that leads from the cellar. “It was scarcely more than a crawlspace,” writes Cusick. “They had the most horrible feeling that they were crawling deeper and deeper into the earth.”

What they find is a gorgeous, ghoulish nod back to Hammer Horror films (“An altar wreathed with candles… And the stale, faded sweetness of dead flowers…”), and a final confrontation that really pulls the rug out from under you.

You can buy a copy of Vicious Rumer here 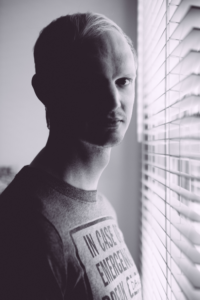 Joshua Winning is an author and film journalist who writes for TOTAL FILM, SFX, GAY TIMES and RADIO TIMES. He has been on set with Kermit the Frog, devoured breakfast with zombies on The Walking Dead, and sat on the Iron Throne while visiting the Game Of Thrones set in Dublin. Jeff Goldblum once told him he looks a bit like Paul Bettany. In 2018, Joshua’s YA thriller VICIOUS RUMER was published by Unbound. His dark fantasy series THE SENTINEL TRILOGY was published by Peridot Press, and he also co-wrote ’80s teen horror CAMP CARNAGE. In 2015, Joshua’s short story DEAD AIR appeared in SPEAK MY LANGUAGE: AN ANTHOLOGY OF GAY FICTION.

You can find out more about Joshua on his website- www.joshuawinning.com

You can find links to all #PointHorrorBookClub posts here

A huge huge thank you to Joshua for featuring on Tales and a huge round of applause for such a fab guest post!