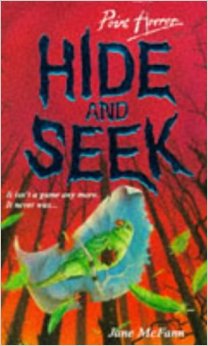 Hide and Seek by Jane McFann 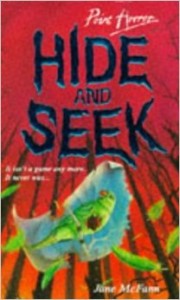 There is a link to a poll at the bottom of this post to vote for your next #pointhorrorbookclub read! The next book will be announced on 17th April 2016

Well!  This is what happens when we ALL complain that parents are conveniently absent from Point Horror Books!

We literally could not escape them in this book!

Or at least our main character Lissa couldn’t!

But Why?  What happens?

We begin the story at the end!

Poor Lissa is hiding at the bottom of a tree trunk covered in leaves with her beloved pet bird called Bird.  Someone is after her!  They want her dead!

Dead?!  Sounds like a normal Point Horror to me!

Well, this was no ordinary Point Horror.

As Lissa is sitting at the bottom of the tree waiting to die we get glimpses into her memory and her past.  Her childhood growing up.  Lissa has learnt how to be so quiet.  To be invisible.

And there is a reason for this….her Father!

Lissa the quiet little mouse.  With her elf like hair that used to be long, her love for mint choc chip ice cream and the want for her Father to be proud of her made me route for her all the way!

I felt her glow on the page when Josh was around or when her only true friend Bird was clutched to her chest or nibbling at her fingers.  I cheered for joy when she finally left that house and her Father and I was happy for her in the end.

Okay I admit it …. I am a little in love with Josh!  He made my heart all fluttery!

With his goofy grin, blonde floppy hair and basically just his presence on the page made me smile so so much.   When he get’s Lissa the flowers, bakes her cake, wants to get to know Lissa more and help her and then saving her at the end!

Was this just me?!

That scene where he calls Lissa perfect!

“Josh, you have been the only beacon of light in the darkness that has become my life”

He can enter my realm, lower my drawbridge, fight of the dragons and grab me from my tower any day! 😉

Yep they get a whole heading to themselves!

So shall we start….

The brooding artist with his dark black eyes, thick curly grey hair and always wearing the same jeans and shirt!  Lissa’s Father.  Who basically controls Lissa’s Mother who is so scared of him she constantly makes excuses for his vile, abusive behaviour.

Throughout the course of the book not only does he ignore his daughter and belittle her, he cuts off her long brown pigtailed hair, pushes her down the stairs making Lissa break her leg (he did it you know he did!) and pins Lissa up a tree by her throat threatening to kill her!

I am actually so terrified of her Father!  His presence every time he was on the page made me rage and I wanted Lissa to get the hell out of there!

Lissa’s Mother did frustrate me a little, but only because I was screaming for her to take Lissa as far away as possible.  Even down to the story of how they met…the tell tale signs were all there for us as a reader to see.  When she finally took Lissa away from her Father I cheered in joy although the end we had read at the beginning was obviously going to crop up at some point, but I then became angry with her all over again when every day she would drive four hours to go back to look after Lissa’s Father….you know just to make sure he was okay!

But in all honesty I think Jane McFann portrayed the situation of an abusive Father, a Mother torn and scared to leave and a girl completely lost and scared so so hauntingly well.

The scene where Lissa’s Mother and Father are dancing away in the kitchen really felt like a happy moment.  Just a snapshot of a moment.  Jane McFann really tugged on the old heart strings!

On a little side note kudos for this Point Horror to actually print the word “gay” in it’s text but how did we all feel about it’s context?  Basically Lissa’s grandfather accusing his son (Lissa’s Father) of being gay because he drew pictures?  This made me rage I have to admit!

Bird.  Yes I’m classing Bird as part of the gang here!  He was Lissa’s only true friend.  A green, gray-cheeked parrot with a blue shading to green head.  Only four inches long and weighing in ounces he was also feisty and intelligent and bonded with Lissa completely.  He had his own character even with little dialogue other than a swark every now and again.  My heart actually dropped with Lissa’s Father grabbed him tightly and threw him on the floor!

Abby…. the girl who didn’t stop talking with her red hair and her endless need to cram as much dialogue in as possible.  She was only a brief character, but one unforgettable one!

I was either too wrapped up in Josh or there were no noticeable fashion disasters in this Point Horror.  Or did I just miss them?!

I have to say I didn’t find many….but here’s a couple that made me giggle!

Lissa you can always say no!

I always knew that this was going to be a different type of Point Horror.  At one point I wondered what I was getting myself in to! 🙂

But in this case I’m glad it was zero as it would have been tragic!

No scrap that I wish it was 1…..I will let you guess who!

No not really….however it was more psychological in my opinion.  The scenes with Lissa’s Father made me so tense and the scene in the woods at the end!  I actually thought Point Horror peeps were actually going to let the author kill her main character off!

No!  Lissa kept herself to herself and didn’t make friends.  It wasn’t that kind of Point Horror (I know I keep saying this).

The reality was it was far worse…her Father!

Any scene involving her Father basically put Lissa in severe peril and was just horrific to read!  I was so scared for her!

I think with this in mind, if you don’t think of this as an actual Point Horror book brand it was actually really really good.  But if you like your Point Horror with Point Horror egg cracking and all then I think you may be left disappointed.

I do ponder if this originally had a different ending though.  I was left just a tiny bit disappointed by the end.  Did they change it to make it a Point Horror ending maybe?

I do think that this is one book I would actually recommend people to read if they were looking for a harrowing tale of childhood, abuse and a mild thriller that makes your heart beat a little.

Will this divide the Point Horror Book Club!? 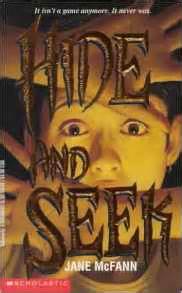